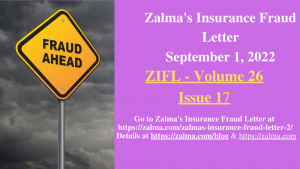 The issue contains articles including:

Andrew Joseph Mitchell, according to to the Texas Department of Insurance, which reported that a public adjustment company sanctioned last month by Louisiana regulators has pocketed more than $300,000 in insurance payouts intended for Texas property owners.

Plaintiff appealed the district court’s order granting summary disposition in favor of defendants Home-Owners Insurance Company (“Home-Owners”), American Country Insurance Company (ACIC), and Hartford Accident and Indemnity Company (“Hartford”), with respect to Plaintiff’s claims on uninsured or underinsured motorist benefits and first party personal protection insurance (PIP) benefits under the No-fault Act, MCL 500.3101 a seq. Although the defendants disputed their priority in paying PIP benefits, the trial court did not decide the issue of priority, but instead dismissed all claims based on the anti-fraud provisions of the defendants’ respective policies.

Oneatha SwintonThe former acting principal of Port Richmond High School in Staten Island, New York, convicted of auto insurance fraud kept her job with the New York Department of Education — and even got a raise — despite what school investigators called her “pattern of dishonesty.”

The DOE gave Swinton a deal to stay despite the felony conviction plus the finding that she improperly sent $100,000 in school funds to a vendor and “failed to protect” 600 DOE computers, printers and laptops that disappeared under her watch.

If you have not complied by today, you are in violation

Insurers licensed or operating in California must ensure that all of their claims personnel have read, understood or been trained in the California Fair Claims Settlement Practices Regulations by September 1 of each year and be prepared to swear under oath that the regulation has been followed by insurers.

The primary grounds for rescission are:

“Telehealth Fraud, often referred to as Telehealth Fraud, is a growing trend in Medicare. The Covid-19 pandemic created unprecedented challenges for accessing health care for patients in need of social isolation, leading to an explosion in telehealth,” said Maria Alvarez, executive director of StateWide as she announced the Medicare Fraud of the Month.

The government fraud of the month is part of Senior Medical Patrol, the definitive resource for New York seniors and caregivers to help detect, prevent and report Medicare fraud and waste. StateWide is the New York recipient/administrator of this federal program.

Ricky Gonzales ran Ricky’s Construction Company, which supplied construction labor to contractors. The Tampa, Florida man lied about paying workers’ compensation for the workers he provided — who were undocumented immigrants. The contractors then sent Gonzales what they thought were paychecks. Gonzales cashed the checks at banks to pay the workers. Gonzales lied about employees having full job skills. In truth, he accepted and cashed more than $7 million in checks from construction contractors for his employees. That far exceeded the limited payroll that Gonzales reported to his insurer. His employees thus worked in workplaces without sufficient insurance coverage. Insurance companies lost premiums they would have charged had they known the true number of workers their policies were rigged to cover. Gonzalez also illegally evaded state and federal payroll taxes. He pleaded guilty federally and faces up to 25 years in prison when sentenced.

And many more convictions.

A Redondo Beach chiropractor was sentenced to 14 months in prison for soliciting kickbacks from other hospitals. (Shutterstock)

The South Bay chiropractor was convicted of taking kickbacks from Pacific Hospital — a Long Beach medical center whose then-owner was later jailed — and soliciting kickbacks from another Southern California hospital. Carrico pleaded guilty in February to one count of soliciting money — the same day his two Redondo Beach-based businesses, Performance Medical & Rehab Center Inc. and One Accord Management Inc. — each pleaded guilty to one count of conspiracy to solicit kickbacks.

Click here to subscribe to excellence in claims management software for each of your claims professionals for only $5 per month or $50 per year by subscribing to Zalma on insurance with locals.

In an effort to save the few remaining insurance companies doing business in Florida, the state has taken aim at unlicensed contractors who some claim have been driving up the cost of repairing Florida properties.

Mykhaylo Chugay from 2007 to 2021, according to federal prosecutors, ran a number of shady staffing companies in South Florida that avoided paying more than $25 million in federal taxes. Last week, a federal judge sentenced Chugay to 24 years in prison for his June conviction for crimes that included wire fraud, harboring illegal aliens and money laundering, according to prosecutors and news reports. Plus many more convictions.

On 25 August 2020, the Association of British Insurers and the Insurance Fraud Bureau announced: