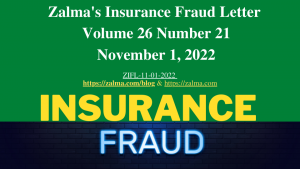 In this 21st issue of the 26th year of publication of Zalma’s Insurance Fraud Letter, you will find articles discussing the following insurance fraud issues:

When an insured lies to their insurer, the claim can be denied

In his application for insurance with the insurer, Benitez reported no previous losses on his property. But after Benitez submitted a claim for new damage, the insurer’s inspector found evidence of pre-existing damage and repairs. The insurer denied Benitez’s claims but continued to collect premiums from him for years. Benitez then sued for breach of contract, and the insurer asserted an affirmative defense based on section 627.409, Florida Statutes (2019).

Chutzpah: Insurance criminals’ behavior on release must stay in prison

In June 2017, Monnie Villareal and two co-defendants were charged with insurance fraud (Count I), conspiracy to commit insurance fraud (Count II), making false claims (on Count III), and conspiracy to commit false claims (on Count IV). The indictment alleged that the defendants, acting on behalf of a tree service company, conspired to present a false certificate of insurance to a customer in order to obtain the customer’s business and payment in excess of $500. In May 2018, Villareal pleaded guilty to Count II, pursuant to a plea bargain, and the remaining charges were not brought. The court sentenced Villareal to five years in the custody of the Mississippi Department of Corrections (MDOC) with credit for time served and the remainder suspended on post-release supervision (PRS).

This issue includes information about convictions such as: Roshanak Khadem ran clinics that provided beauty and spa services. The women from Sherman Oaks, California recruited patients for Botox injections, facials and laser hair removal. Khadem knew the procedures weren’t insured, but she told some patients to give her their insurance information so she could falsely bill her health plans for nearly $8 million for bogus or unnecessary medical procedures. In return, she gave patients free or discounted cosmetic procedures. She deposited the insurance payouts into bank accounts held in the names of doctors affiliated with her clinics. They signed the fake claims to slip them past the insurance companies. Khadem then received the deposited funds using his check signing authority on the bank accounts. She also used pre-signed checks she received from the doctors. Khadem pleaded guilty and received 72 months in federal prison.

How to increase the professionalism of your claims staff

The insurance industry has been less than effective in training its staff. Their employees, whether claims, insurance or sales, are hungry for education and training to improve their work in the industry.

Insurers without enough staff to make a classroom training program practical have options available. If the insurer wants to honor its employees who want to improve their knowledge and skills, it can do so inexpensively by adding a complete insurance library to each employee’s library by internationally recognized insurance protection, claims management, fraud and insurance law expert and author, Barry Zalma , Esq., CFE.

How to Defeat or Deter Insurance Fraud

Insurers must be proactive against insurance fraud

Insurance companies must stop the logarithmic growth of insurance fraud

Fraudsters take more money every year from insurance buyers. The Coalition Against Insurance Fraud recently revised its estimates from $80 billion a year to announce that insurance fraud takes over $308 billion a year from the insurance industry. The US Department of Justice, working with various federal law enforcement agencies, has taken an active role in investigating, prosecuting and convicting those who defraud US health programs and federally funded insurance such as flood insurance and crop insurance. Still, the arrests and prosecutions that do occur make only a small dent in the amount of money stolen from private and federally funded insurance.

Ahmad M. Mehdi and his medical practice, Ahmad M. Mehdi, MD, PC. (“Mehdi”) agreed to pay a total of $900,000 to settle civil claims for upcoding invoices for certain medical services, billing for smoking cessation counseling services that were not adequately documented, and alleged improper prescribing of opioids, the U.S. Attorney announced . Carla B. Freedman. [Plus dozens of other convictions]

Does a law firm attempt fraud when it files 1,642 cases in two weeks

McClenny, Moseley and Associatesa law firm, was threatened by a federal judge in Louisiana to fine the Houston-based law firm $200 for each duplicate or baseless lawsuit he finds among the 1,642 the company has filed against insurers for alleged hurricane damage.

US District Judge James D. Cain Jr. on Oct. 21 ordered the law firm to submit hard copies of retention or engagement contracts with each of the named plaintiffs in lawsuits the law firm filed to recover damages allegedly caused by Hurricanes Laura and Delta, both of which struck Louisiana in 2020. [Plus many more convictions]

Barry Zalma, Inc., 4441 Sepulveda Boulevard, CULVER CITY CA 90230-4847, 310-390-4455; Subscribe to Zalma on Insurance at locals.com https://zalmaoninsurance.local.com/subscribe. Subscribe to Excellence in Claims Handling at https://barryzalma.substack.com/welcome. Write to Mr. Zalma at zalma@zalma.com; http://www.zalma.com; http://zalma.com/blog; I publish daily articles at https://zalma.substack.com, Go to the Zalma On Insurance podcast at https://anchor.fm/barry-zalma; Follow Zalma on Twitter at https://twitter.com/bzalma; Go to Barry Zalma videos on Rumble.com at https://rumble.com/c/c-262921.