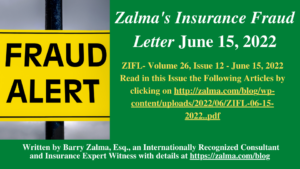 Zalma’s Insurance Fraud Letter Contains articles on the following topics in detail on ZIFL-06-15-2022. The following are some of the articles available with as many as 20 pages available on the link.

Insurance fraud and the states

State insurance departments near the turn of the century realized that insurance fraud is a serious crime that takes billions of dollars from the insurance industry. Local police and prosecutors were not concerned, even after insurance fraud was turned into a felony, as no one suffered physical injury or death. Insurance fraud only cost a lot of money for insurance companies that were perceived as extremely rich and more vulnerable than victims.

Since almost no one was prosecuted for insurance fraud, states, such as California, enacted statutes that required insurance companies to scrutinize all claims, set up a special fraud investigation unit whose sole purpose was to detect, investigate, gather evidence, and present that evidence to prosecutors. to prosecute the crime. The Special Investigation Units (SIU) did the work only to find most of their investigations ignored and their success received little or no encouragement from the insurance companies and the state. Both wanted all claims to be settled quickly and fairly. The sellers could not explain why their fraud perpetrators’ clients were put under oath and asked to prove their loss rather than just get a quick and undisputed check.

Reporting an accusation of insurance fraud leads to defamation proceedings

A person accused of fraud failed to immediately file a motion

Matthew Steven Miller, 43, pleaded guilty before U.S. District Court Judge Ronnie L. White to one count of obtaining a controlled substance by fraud and one count of making a false statement regarding a health care issue.

Miller admitted to illegally prescribing the anti-anxiety drug Xanax to six people between 2016 and 2018. He had no doctor-patient relationship with them, had not examined them, had not decided they needed the drug and did not document prescriptions, his agreement states. . At times, they sold the drugs and split the money with Miller, his appeal says.

Miller wrote the prescriptions even though he was not licensed by the Missouri Bureau of Narcotics and Dangerous Drugs and lacked the Drug Enforcement Administration registration number required to do so.

Miller was licensed to practice medicine in Missouri, Michigan and New Jersey.

Clint A. Stevens, 45, the owner of a construction company in Jacksonville pleaded guilty to home repair fraud on May 24, 2022 in Morgan County Court.

Stevens, the owner of C&A Construction, pleaded guilty to home repair fraud, a Class 4 crime. The only charge stems from an arrest by Jacksonville Police on April 12th2021 after an investigation.

According to the indictments, Stevens presented essential facts regarding the terms of a contract or promised performance, and said on September 28, 2020 that he would begin repairs to a home on Pintail Court by October 2020 and then did not begin work.

Termination as a weapon against insurance fraud

Since the turn of the century, the plaintiffs’ bar association has tried to counteract the revocation remedy and give its clients more access to courts that assess damages against insurers and avoid liquidity courts that, if revocation were established, would have no right to damages by law. The plaintiff’s ban created the concept of “post loss underwriting” (an oxymoron) to convince a court that the insurer did not use the leverage properly and force the insurer to pay a claim on an insurance issued by fraud even when trying to obtain damages from an insurer as an insurer. has established all the elements necessary to prove the right of revocation.