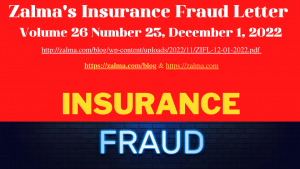 California Governor Gavin Newsom has signed into law Senate Bill 1242, written by the Senate Insurance Committee, which aims to protect California consumers by imposing a variety of requirements on producers.

The omnibus bill is essentially a hodgepodge of unrelated subjects covered by a single law. It goes into effect on January 1, 2023 and addresses, among other things, insurance fraud reporting and education mandates, fingerprinting and license disclosure.

At the beginning of the year, agents and brokers will be required to report fraud to the California Department of Insurance (CDI). Specifically, SB 1242 amends the California Insurance Code to require producers who suspect or know that a fraudulent application for insurance is being made to submit information to the DOI Fraud Division through the electronic Consumer Fraud Reporting Portal regarding the factual circumstances of a questionable application and alleged misrepresentations it contains.

North Carolina’s Wake County Superior Court judge ordered liquidation of two life insurance companies in rehab run by billionaire insurance and finance executive Greg Lindberg. The judge approved the decision to liquidate Colorado Bankers Life Insurance Co. and Bankers Life Insurance Co., which had been in rehabilitation since 2019. The companies were put into rehabilitation after questions arose about Lindberg’s alleged use of reserve funds to support other businesses he ran.

A pain doctor trapped patients with unnecessary injections for knees and other body parts in a $240 million program in San Antonio, Texas area. Dr. Jorge Zamora-Quezada misdiagnosed patients with degenerative diseases such as rheumatoid arthritis. He gave them batteries of injections, invasive chemotherapy and other toxic treatments they didn’t need. He got a trip to the coalition Insurance Fraud Hall of Shame 2020 — and is finally scheduled for federal sentencing on May 18. Zamora-Quezada kicked patients out of his office if they questioned his treatments and hid their medical records from doctors the patients next saw. He also laundered the insurance money. And he bought a private jet, owned luxury properties in Aspen and other jet-set locales, and bought a fleet of luxury cars. And Zamora-Quezada gave patients knee-jerk doses of chemotherapy and other toxic treatments they didn’t need, all to keep insurance money flowing. Many patients – one just 13 years old – suffered severe physical and emotional damage from chemotherapy injections and sometimes hours-long intravenous infusions. Zamora-Quezada misdiagnosed a man with rheumatoid arthritis. The patient later suffered skin burns, lost both fingernails and toenails, and later began to lose skin from the toxic medications. His health problems continued until his death.

An attorney is not an insurance adjuster. The attorney representing an insurer at an EUO is not a “super adjuster.” The solicitor is a lawyer who was engaged to provide legal advice and counsel after helping the insurer gather facts on an EUO.

Competent outside alignment services can be obtained for much less per hour than any attorney. The EUO should supplement, and be part of, the thorough investigation of the insurance fund.

It should provide the information that the insurance fund cannot obtain because of the insured’s reluctance, because of the lack of records or because complex legal and factual issues have made it impossible to resolve the claim at an adjustment level.

Florida Birth Related Neurological Injury Compensation Plan and its administrator, the Florida Birth-Related Neurological Injury Compensation Association (collectively, “NICA”), has agreed to pay $51 million to settle allegations that it violated the False Claims Act by having NICA participants submit their health care claims to Medicaid rather than NICA, in violation of Medicaid’s payer of last resort status under federal law.

The civil settlement resolves a lawsuit filed and pursued by the estate of Veronica N. Arven and Theodore Arven III against NICA in qui tam or whistleblower provisions of the False Claims Act, which allow a private party (known as a relator) to file a lawsuit on behalf of the United States and receive a share of any recovery. Although the United States did not intervene in this case, it continued to investigate the whistleblowers’ allegations, provided substantial assistance to the whistleblowers in defending against a motion to dismiss, and negotiated the settlement announced today. Arvens will receive $12,750,000 as its share of the recovery in this case.

When an insurer decides to cancel an insurance policy, it is often accused of “post-loss guaranteeing”. Although considered in some states, postal loss guarantees are an oxymoron. Underwriting is the decision, based on information from a proposed insured, to accept the risk of certain losses that the proposed insured needs. Underwriting, by definition, must be completed before an insurance becomes effective, except in cases where an insurance is tied to the condition of a physical inspection of the property. If the inspection shows that the risk is different from that promised by the insured, the insurance ceases. Cancellation, on the other hand, occurs when an insurer learns, after a policy has been written, that it has been misled by a material misrepresentation or concealment of a material fact or by fraud.

Frances Davis pleaded guilty to one count of attempted workers’ compensation fraud, a fifth-degree felony, and agreed to pay $17,144.79 in restitution, according to the Ohio Bureau of Workers’ Compensation. The BWC Special Investigations Department discovered that Davis potentially earned wages while collecting disability benefits from BWC.

Davis, a woman from Franklin County, Ohio, was ordered to pay $17,000 in restitution she defrauded from the Ohio Bureau of Workers’ Compensation.

It was confirmed that while Davis was collecting benefits, she worked for seven different employers over two years, holding positions such as manager, assistant manager, packer and machine operator.

A Franklin County judge found Davis guilty and sentenced her to five years of community control to also pay restitution.

For subscribers only, I have published special insurance videos

Today on Locals.com I posted video number 23 of the Excellence in Claims Handling program on specific, general and reported scopes. I also posted on Substack.com Video number 9 on the Excellence in Claims Handling program which is only available to subscribers. Subscribers have access to all videos and a webinar on “The Investigation Under Oath A Tool Available to Insurers to Thoroughly Investigate Claims and Work to Defeat Fraud.”

Go to substack at substack.com/refer/barryzalma