Why I’m Grateful | Zalma on insurance 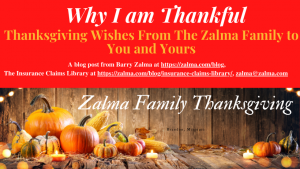 A blog and video blog explaining why I am grateful

My family and I have much to be thankful for this year, not least the care provided by Dr. Wright, the cardiologist who cares for me and my wife, Thea.

I am personally in good health, walk four to five miles a day and retired from law practice, work only six to eight hours a day doing what I love most, writing about insurance, insurance claims, insurance law and acting. as an insurance claim consultant and expert witness.

To me, I am grateful to you, my friends, customers and readers of “Zalma’s Insurance Fraud Letter”, my blog “Zalma on Insurance” and my books and other writing including the new books: The Compact Book of Ethics for Insurance Professionals, The Tort of Bad Faith, the equitable remedy for cancellation of insurance, and Insurance fraudsters don’t deserve a quarter, the latest among many other books I have written about insurance, insurance law and insurance claims is available.

As a first-generation American, whose parents were proud naturalized citizens, I am honored to join all Americans in celebrating Thanksgiving. The holiday began when the US was a dream and just a colony of Great Britain to give thanks for the good things in life at least once a year. It took Abraham Lincoln, our greatest president, to make it an official holiday. The Thanksgiving holiday gives me and my family the opportunity to reflect on the blessings we have received as an American family and to thank everyone who has made it possible.

When I enlisted in the US Army in 1967 to avoid the draft, I volunteered to serve anywhere in the world other than Vietnam. Fortunately for me, it seemed that the US Army did assignments in alphabetical order, so I was sent, with the wisdom that only the US Army could understand, to Peoria, Illinois. I served my enlistment in Missouri and Illinois where I became a special agent in charge of an office of US Army Intelligence investigating people seeking security clearances.

I was effectively trained to be an investigator and enjoyed every minute of the job. Until the Army I had never seen a river without a concrete bottom only to see the mighty Mississippi as my first real river. I had never seen snow except in the distance on mountains, only to find myself shoveling snow from the driveway of the tiny half house I rented from my Peoria landlords, an old couple who couldn’t do it themselves.

My investigative assignments required me to travel through central Illinois from Iowa to the Indiana border. I stopped at courthouses along the way, all bearing signs that Abraham Lincoln had practiced law there and convinced me to return to California and study law. These experiences with courts, law enforcement officers, and court personnel gave me the incentive to become a lawyer.

After completing my three-year enlistment, I returned home, proposed marriage to the love of my life. I started studying law at night and found my first real job where I could use the skills I learned in the army. I was employed as a claims intern at Brandmansfonden’s insurance company, who spent the time training me to become a claims adjuster.

The training I received was, unlike what is done at modern insurance companies, thorough. I had to read a dissertation on insurance and handling insurance claims. I was sent out with experienced adjusters in all kinds of insurance Brandman’s Fund wrote, and eventually had to deal with the public under close supervision.

Contrary to what was done in the insurance industry at the time, the Firefighters Fund allowed me to study law at night while working as a full-time insurance adjuster at the Firefighters Fund. I was fortunate to work for a claims adjuster – Coleman T. Mobley – who did not require me to leave the state to adjust large storm claims if it interfered with my law school studies. Since I was in law school 50 weeks a year, the only storm duty I had to work was on a firestorm that burned from the San Fernando Valley to the ocean at Malibu. Because of Mr. Mobley and the Fireman’s Fund, I was able to complete my studies and pass the California Bar in late 1971, allowing me to be admitted to the California Bar on January 2, 1972.

I took a pay cut to get my first job as a paralegal at a law firm that was willing to learn how to become a lawyer dealing with all kinds of issues a new lawyer can face from wills, tort claims, divorce, drunk driving, trials, depositions and dozens of orders to show cause in multiple courts around the Inland Empire of California. By doing so, for the first two years after I began practicing law in 1972, I was able to become a lawyer who could handle any questions that came my way.

I was fortunate enough to transfer to an insurance law firm in Century City where I was assigned a coverage attorney trying to handle over 500 active cases who, when I arrived, assigned me 250 of the cases and referred me to the firm’s library to learn what to do . At the time, new technology was an IBM Selectric typewriter that could erase errors from the keyboard without having to use white paint. I did legal research in the firm’s large library which, when inadequate for the task, had to drive to the County Law Library in downtown Los Angeles. Researching a large library took days to find support for a problem.

In 1979 I decided it was time to become my own boss. I started a law firm called Barry Zalma, Inc. with a secretary who came over from my previous firm and brought an IBM Selectric typewriter into a small windowless office. I had gotten a line of credit from a bank that I hoped would see us through until the internship started, since the only case I had was my sister’s back that I couldn’t get paid from. The office was furnished with a filing cabinet from my father-in-law’s dental office and a dining room table from my wife’s late grandmother.

I received my first call at 8.10am on the first day, 1 October 1979, from Alan Worboys, then a claims officer at Lloyd’s, who assigned my first case, and my practice began. I had nothing to do on October 3, 1979 so I wrote an article for publication. After that I had no rest and the firm quickly grew to 9 lawyers and a large staff to serve me and the 8 other lawyers. The firm defended people who were insured and soon morphed into specialists who served as coverage counsel for insurers who needed advice and defense of bad faith lawsuits. We did not make any plaintiff’s damages claims.

Some of the things I and my family can be thankful for are:

I was more successful than I ever expected. I, whose life experience was limited to Los Angeles County and central Illinois, found the need to travel to Taipei, Taiwan and London, England on behalf of my clients. I worked, as I had learned from my father who survived the depression, 16 hours a day six or seven days a week. By the time I was 75 years old, my business had been reduced to a single business and I decided it was time to stop practicing law and become a consultant and fulfill my childhood dream of becoming a writer.

I am a very happy and lucky man. I work as I love. I fulfilled my childhood dreams. I live in a home that I have owned for more than 46 years that my wife and I adapted and increased as children were born to meet our needs, have the love of my life with me and look forward to celebrating our 55th wedding anniversary next month .

I am honored that my oldest daughter has come back to live with us and take care of my wife and I who cannot do all the things we used to do. My son shares my office building and has time to visit me in his busy schedule. My youngest daughter is a successful PR manager and makes time to visit us regularly so that we can play with her soon to be six year old daughter as often as possible.

I hope, this Thanksgiving weekend, you can join my family and me in remembering that it is more important to think about our blessings and the things we have to be thankful for than to wait in line for “Black Friday” for to buy a cheap flat-screen TV or tablet.