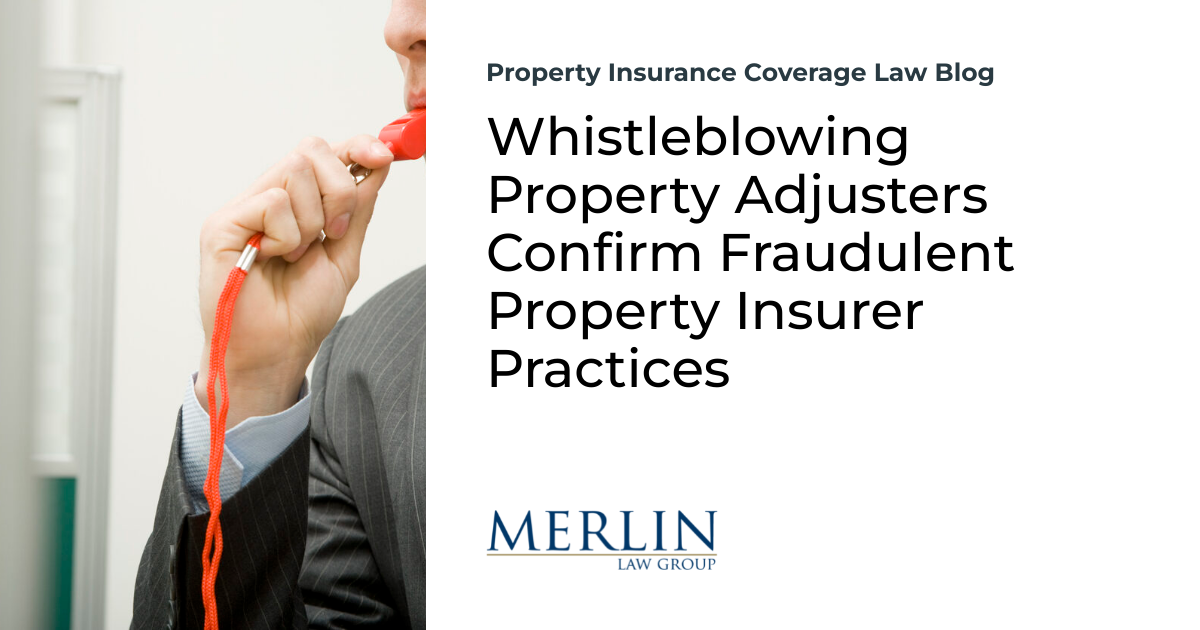 I thought of another title for this post: Florida Republican Leaders Heard Firsthand How Insurance Companies Fraudulently Underpay Claims And Still Sold Out Their Constituents. Both titles are appropriate.

“The insurance companies asked the file reviewers to change my estimates to repair the roofs rather than replace a total roof,” said Ben Mandell, a licensed all-line adjuster. “However, the insurer left my name on the estimates in a fraudulent attempt to make it appear that I had written this false estimate.”

; The scheme was repeated over and over, he said.

Another adjuster who works part-time in Louisiana also said he has witnessed the practice multiple times in both states, with insurance companies redacting entire sections of his reports and omitting thousands of dollars of needed repairs.

“The problem is they leave our name on the estimates,” Adjuster Mark Vinson told committee members. “When they send it to the policyholder, they (policyholders) are under the impression that it’s a legitimate estimate, and it’s not.”

Adjuster Jordan Lee, who also works in Texas, said insurance companies and adjusters have tampered with reports and deleted photographs and other key information to drastically limit payouts to policyholders.

Later Tuesday, Mandell told Insurance Journal that several insurers have engaged in the practice in Florida and Louisiana. Vinson said “most carriers” in Florida and several in Louisiana have changed his reports without his permission. Vinson said Universal Property & Casualty Insurance Co., Florida’s second-largest carrier, behind state-created Citizens Property Insurance Corp., was one of the most common offenders.

This year, the tactic appears to have become much more common in Florida, Mandell and Vinson said Insurance magazine.

In a recent report on hurricane claims, Vinson said he noted that the entire shingle roof on one home was heavily damaged and needed to be fully replaced. He documented the damage with more than 100 photos. But the amended report, sent by the insurer to the homeowner, had left the roof section out of the report entirely, lowering the repair estimate by about $30,000, he said.

“And it was with photo evidence, mind you,” Vinson said.

Three weeks ago, an independent adjuster came to my office and showed me how adjustments to field reports were changed with a carrier other than those listed in Insurance magazine article. According to this adjuster, a number of independent adjusters quit or were fired because of the practice.

The practice of altering field adjustment reports to reduce claims payments is becoming more common as more insurance companies hire independent adjusters rather than doing the adjustment with their own employees. The desk adjusters at the independent firms and the managers who oversee the operations of the insurance companies conduct “collaborations,” which change the estimates. They can remove photos and evidence of damage so regulators and others can’t challenge the revised estimate.

What did Florida’s Republican elected officials do after hearing this? As a registered Republican, I am ashamed to say that they voted for the interests of the insurance companies and have effectively condemned Floridians to more of the same treatment without having to do anything about it.

My Democratic friends ask why I support so many Republican candidates. Actions like this and the lack of courage make me wonder why too.

As for the independent adjusters and other property adjusters who do not indulge in unethical claims handling claims – BRAVO! You have permission to comply with the law and improperly changing damage estimates is illegal.