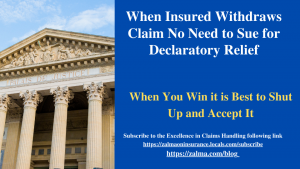 As a young lawyer, one of the first things I learned was never to argue with a judge whose preliminary ruling is to grant your motion. Insurers often, when there is a dispute about insurance coverage, seek declaratory relief from the court of its obligation to defend or indemnify the insured. However, when the insured advises that there is no claim, it is a waste of time for counsel, the insured and the courts to bring an action for declaratory relief.

The declaratory judgment action involves Hanover’s potential obligations to defend or indemnify defendants in a putative class action brought in the U.S. District Court for the District of Colorado.

Plaintiff in the putative class action, style In Re HomeAdvisor, Inc. Litigation, civil action no. 16-CV01849 (the “HomeAdvisor Litigation”), filed on July 16, 2019. Plaintiffs in the HomeAdvisor Litigation have amended their complaint several times and continue to assert claims against Defendants CDVM and Venture Street. After Defendants were sued in the HomeAdvisor lawsuit, they provided notice of the litigation to Plaintiff Hanover. On November 12, 2019, Hanover responded to the notice by denying defendant insurance coverage for the HomeAdvisor lawsuit. The defendants requested reconsideration from Hanover on January 29, 2020 and again on April 23, 2021, but Hanover reaffirmed its denial of coverage.

Plaintiffs filed suit on July 6, 2021, seeking a declaration that they have no obligation to defend or indemnify Defendants in the HomeAdvisor lawsuit. Plaintiffs allege that “[t]here no coverage is available for the claims asserted [Defendants] CDVM and Venture Street in the HomeAdvisor process” for several reasons. Specifically, the plaintiffs argued that insurance coverage is not available because

Defendants, in response, notified Plaintiffs that they were no longer seeking coverage from Plaintiffs for the HomeAdvisor lawsuit on July 19, 2021. On August 16, 2021, Defendants confirmed that they had withdrawn their request for coverage from Hanover. Through counsel, the defendants communicated the details of their withdrawal to the plaintiff

The Declaratory Judgment Act authorizes federal courts to review claims for declaratory relief. The vital purpose of a declaratory judgment is to guide the parties in their future conduct in relation to each other and thereby free them from the risk of taking undirected action contrary to their rights.

The doctrine of standing has its foundation in the Constitution’s limits on judicial power in Article III. Ripeness, another standing doctrine, determines when a case or controversy is appropriate for federal court review.

A claim is not ripe for trial if it rests on contingent future events that may not occur as expected, or may not actually occur at all. A declaratory action is ripe for judicial resolution only when the facts alleged, under all the circumstances, show that there is a substantial controversy between parties having adverse legal interests of sufficient immediacy and reality to warrant the issuance of a declaratory judgment.

The facts of this case do not require declaratory relief on either the duty to defend or the duty to make good issues. Critically, Defendants are no longer seeking coverage under relevant insurance policies to defend themselves against the HomeAdvisor lawsuit. As a result, there is no viable issue as to the plaintiffs’ duty to defend the defendants in that litigation.

If Plaintiff does not deny Defendant coverage to defend against a potential future amended complaint in the HomeAdvisor Defendants case—or if Defendants never again seek such coverage—a decision by this Court regarding Plaintiff’s duty to defend will have no effect. If the Court were to construe the language of the relevant CGL and Excess/Umbrella policies regarding a duty to defend on this occasion, such a determination would be hasty and therefore tantamount to an advisory opinion in violation of Article III.

Similarly, the plaintiff’s obligation to indemnify the defendant under the relevant CGL policies is not ripe for resolution. Whether Defendants should be indemnified by Plaintiffs against liability for damages “would depend primarily on whether [Defendants] found liable for the conduct alleged in the HomeAdvisor lawsuit, but “[thatquestioncannotbeansweredatthistime”ThusthisCourtcannotpresentlyexerciseitsprerogativeunder28USC§2201toissueadeclaratoryjudgmentontheindemnityquestion[thatquestioncannotbeansweredatthistime”[denfrågankanintebesvarasjustnu”Såledeskandennadomstolförnärvarandeinteutövasinbefogenhetenligt28USC§2201attutfärdaendeklaratoriskdomifråganomgottgörelse[thatquestioncannotbeansweredatthistime”ThusthisCourtcannotatthistimeexerciseitsprerogativeunder28USC§2201toissueadeclaratoryjudgmentontheindemnityquestion

The defendants’ motion to dismiss was granted. Plaintiff’s complaint was dismissed without prejudice.

In this case Hanover denied defense and relief to the defendants who, after some discussion, withdrew their claims. With no pending claim—only a potential for future claims—Hanover refused to accept the fact that they had won the argument about the availability of coverage for defense or indemnification and filed a complaint for declaratory relief seeking the court’s order by the defendants not to seek defense or redress was proper and prevented them from changing their minds.