When insured lies | Zalma on insurance 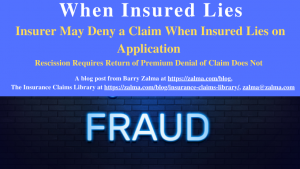 Cancellation requires return of the premium

Cesar Benitez appealed the trial court’s entry of final summary judgment in favor of Universal Property and Casualty Insurance Company (“the insurer”) in a first-party property insurance dispute regarding a water damage claim.

In his application for insurance with the insurer, Benitez reported no previous losses on his property. But after Benitez submitted a claim for new damage, the insurer’s inspector found evidence of pre-existing damage and repairs. The insurer denied Benitez’s claims but continued to collect premiums from him for years. Benitez then sued for breach of contract, and the insurer asserted an affirmative defense based on section 627.409, Florida Statutes (2019). The law provides:

(a) The misrepresentation, omission, concealment or statement is fraudulent or material to the acceptance of the risk or to the risk assumed by the insurer. § 627.409(1)(a), Florida Stat. (2019) (my emphasis).

Additionally, the insurer’s policy allowed denial of coverage if Benitez “[i]willfully concealed or misrepresented any material fact or relationship; (2) [e]engaged in fraudulent conduct; or (3) [m]made materially false statements; relating to this insurance.”

The insurer also moved for dismissal for fraud on the court or, in the alternative, for a judgment under section 627.409 for material error.

At a hearing on that motion, Benitez did not dispute his failure to disclose the prior claim in both his policy application and discovery responses to interrogatories and sworn statements in his deposition. Benitez instead argued that the insurer could not claim rescission as an affirmative defense because the insurer had continued to collect premiums from him for approximately two years after learning of the previously secret claim. The insurer argued that it was only seeking to deny coverage under section 627.409 and not to rescind the policy.

The trial court held that there was no genuine issue of material fact as to whether Benitez’s failure to disclose the prior claim on his insurance application or in discovery constituted material misrepresentations such that the claim could be denied under the policy provisions and section 627.409.

While section 627.409 provides that an insurer may request cancellation of a policy, the plain language of the statute allows alternatively for an insurer to deny coverage of an individual claim. When statutes are clear and unambiguous, courts will not look behind the plain language of the statute for legislative purposes or resort to rules of statutory construction to determine intent.

The insurer’s affirmative defense was based on the statute, and the insurer made clear at the sentencing hearing that it was not seeking rescission of the policy under the statute, but was instead seeking the alternative remedy of denying the claim.

The trial court properly granted summary judgment on the insurer’s denial of coverage of Benitez’s claim based on material misrepresentations.

An appellate court can affirm a district court’s decision as long as there is some basis to support the judgment in the record. As a result, the Court of Appeal did not have to decide whether there were grounds to dismiss the claim based on fraud on the court.

Cancellation is an equitable remedy where both parties to the insurance contract are returned to the situation they were in before the insurance came into effect and treat the insurance as if it never existed. An insurer that cancels must repay the premium. But under the terms of the policy and Florida statute, if the insured lies about material facts, the insurer can simply deny the claim and leave the policy in effect. As my mother, rest her soul, often told me: “Liars never succeed.” This case proved her right.