When Docs Lie to Insurers 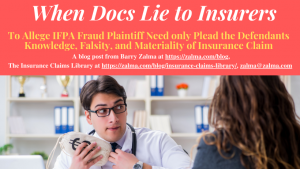 This case arises out of allegations that Defendants engaged in fraudulent billing schemes to profit from administering COVID-19 rapid tests to patients.

Plaintiffs alleged that at the onset of the COVID-19 pandemic, Open MRI and Vestibula X-ray laboratories, along with the other defendants, began providing rapid COVID-19 tests to patients at their joint clinic in New Jersey. Plaintiffs alleged that when a patient took a rapid open MRI or vestibular test, “a patient would have their temperature taken, answer a series of screening questions regarding their symptoms, receive a nasal swab, and shortly thereafter receive test results.” Plaintiffs argued that the entire interaction would last “no more than a few minutes and involved minimal interaction with a physician.” Defendants allegedly charged their patients $35 for a rapid test, but then “submitted substantially higher fees” to plaintiffs for reimbursement.

Plaintiffs alleged that, in order to profit from the administration of COVID-19 rapid tests, Defendants implemented four fraudulent schemes: 1) billing for COVID-19 tests performed without required licenses and authorizations; 2) billing for sample handling services not provided; 3) raising fees for services provided, a tactic known as “upcoding”; and 4) file claims through different companies to avoid the claimant’s fraud detection protocol.

In addition to allegedly billing for services that were not provided, such as sample processing, the plaintiffs also allege that the defendants “upcoded” their claims, that is, the defendants allegedly inflated their bills by submitting claims and seeking reimbursement for more involved medical services than which was actually provided when they administered a covid -19 rapid test. Plaintiffs allege that because of this upcoding, Plaintiffs overpaid Defendants in excess of $500,000 for claims that misrepresented the services Defendants performed.

Last of the alleged fraudulent schemes, Plaintiffs allege that Defendants submitted claims from other Defendants, Universal and Integrated, to conceal their improper billing practices.

Defendants challenged the sufficiency of plaintiffs’ complaints on two grounds. First, as it relates to Plaintiffs’ fraud-based claims of insurance fraud, common law fraud, and negligent misrepresentation, Defendants argue that Plaintiffs’ allegations are not pleaded with the specificity required by Federal Rule of Civil Procedure 9(b)

Under New Jersey law, a plaintiff must show:

A plaintiff must support its allegations of fraud by showing “the who, what, when, where, and how of the events in question. However, a plaintiff need not allege every material detail as long as it pleads the circumstances surrounding the fraud in sufficient detail to inform a defendant of the exact offense of which it is charged.

These allegations establish each element of Plaintiffs’ fraud-based claims, and together they are sufficiently particular to put Defendants on notice of the conduct giving rise to Plaintiffs’ claims, pursuant to Rule 9(b)’s heightened pleading standard.

Aetna should be commended for admitting attempted or actual fraud and proactively acting to sue on behalf of the State of New Jersey under the IFPA to punish those it believed had committed fraud and obtain damages from the insurers and the state from those who committed the fraud. Insurance fraud is a crime in the state of New Jersey but may not be a crime the state is willing to pursue. The IFPA allows insurance companies to act on behalf of the government to deter or defeat insurance fraud. If the allegations are found to be true, the behavior of healthcare providers in profiting from a pandemic is a clear violation of the Hippocratic Oath and is, in my opinion, evil.