Waiver of UIM coverage is effective 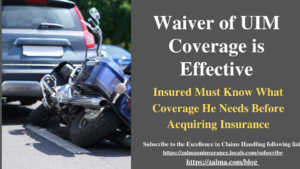 On June 7, 2015, Bryan Koch (“Koch”) was riding his 2013 Harley Davidson motorcycle while his wife, Rhea Lynn Koch (“Mrs. Koch”) was riding with him as a passenger. Their motorcycle was struck by a 1997 Ford Explorer driven by Sean Eyrick, who was later determined to be driving under the influence of alcohol at the time of the accident. Mrs. Koch was killed in the accident, and Koch suffered injuries that required amputation of his left leg above the knee.

The parties do not dispute that Eyrick was solely at fault for causing the accident. Ultimately, Koch decided to settle the claims against Eyrich for his available insurance limits of $15,000.00 for each claimant. The damages Koch sustained from the accident in connection with the fatal injuries to his wife, Rhea Koch, and the damages he sustained in his own right exceeded the liability of Eyrich, who was an underinsured motorist (UIM).

On September 9, 2019, Koch sued Progressive Direct alleging breach of contract by failing to properly and timely evaluate the claim and pay the insured’s UIM policy limits. Koch argued that he, as an individual, and the estate were each entitled to available UIM benefits in the amount of $100,000.00.

On February 25, 2021, Progressive Direct filed a motion for summary judgment, alleging that Koch had originally denied UIM coverage at the outset of a policy held by Progressive Halcyon Insurance Co. which was issued in February 2004 for Koch’s 2002 Honda motorcycle. Progressive Direct argued that Koch’s denial of UIM coverage in 2004 was still effective and carried forward through the addition and deletion of various motorcycles to the policy because Koch never affirmatively changed this designation and denied UIM coverage.

Koch filed a motion for summary judgment and, in support of this motion, Koch presented evidence of a telephone conversation he had with a representative of Progressive Direct, on or about August 20, 2014, nine months before the accident, during which he sought to purchase additional coverage for his 2013 Harley Davidson motorcycle. After the call, Koch added uninsured motorist (UM) coverage to his policy. The Progressive Direct representative never discussed the availability of underinsured motorist (UIM) coverage and it was not acquired.

The district court issued an order granting summary judgment in favor of Koch. As a result, the trial court concluded that appellant had not made a “knowing waiver” of UIM coverage and found that the UIM waiver form that Koch signed in 2004 when the policy was initiated was invalid under the Motor Vehicle Financial Responsibility Act (MVFRL ). Further, the court determined that there is a total of $200,000.00 of UIM coverage available under Koch’s policy at the time of the accident.

As an initial matter, to the extent the court found that the Progressive Direct representative “misled” Koch when she advised him of the availability of uninsured motorist coverage but did not discuss the option of underinsured motorist coverage, Koch’s complaint does not seek to find Progressive Direct liable on a tort theory of misleading, but rather based on a claim of breach of contract.

Although uninsured motorist and underinsured motorist purchases are optional, a Pennsylvania statute provides that the insured must be provided with specific information to explain the separate purposes of UI/UIM coverage and must sign written denial forms with certain language set forth in prominent type and place to knowingly and voluntarily decline any type of coverage.

The insured must sign and date separate forms to decline UI and UIM coverage.

The record supports the trial court’s finding that Koch signed a valid denial of UI/UIM coverage form on February 14, 2004, after the first delivery of the progressive Halcyon policy for his 2002 Honda motorcycle.

These coverage choices were in place at the time of the subject accident which subsequently occurred on June 7, 2015.

The language of section 1731 specifically provides that any individual who completes valid waiver forms denying UI and/or UIM coverage under section 1731(b)-(c) is precluded from asserting liability for any person based on insufficient information. Further, section 1791 of the MVFRL provides that “[i]t shall be presumed that the insured has been informed of the benefits and limits available under this chapter, provided that the following notice in bold type of at least ten point type is given to the applicant at the time of application for original coverage; and no other notice or refusal shall be required.”

Koch executed a valid waiver of UI and UIM benefits upon delivery of the original policy in February 2004. When Koch contacted Progressive Direct on August 20, 2014, stating that he wanted more coverage on the existing policy, the Progressive Direct representative was not required to give Koch additional notice of a particular benefit or to obtain another UIM denial form.

The relevant statutory provision applies to circumstances where UIM coverage has been waived entirely, does not contain the same “purchase” requirement set forth in section 1738, or contains any language that entitles the insured to another opportunity to waive UI or UIM coverage.

The UIM waiver form signed by Koch upon delivery of the policy in 2004 remained valid so that Koch was not entitled to UIM coverage at the time of the accident. Accordingly, the Pennsylvania Court of Appeals reversed the trial court’s decision granting Koch’s motion for summary judgment and denying Progressive Direct’s motion for summary judgment.

The case was remanded for judgment in favor of Progressive Direct on all issues.

Some insurance companies believe that those they insure know what insurance they need and can choose or not choose important policies. Mr. Koch knew he needed uninsured motorist coverage but didn’t know he needed underinsured motorist coverage. The court had no choice but to follow Pennsylvania’s statutory law and refuse to allow him coverage that he did not order, did not pay for the coverage, and had waived the right to the coverage. As much as we’d like 20/20 hindsight, coverage that isn’t there doesn’t make it.