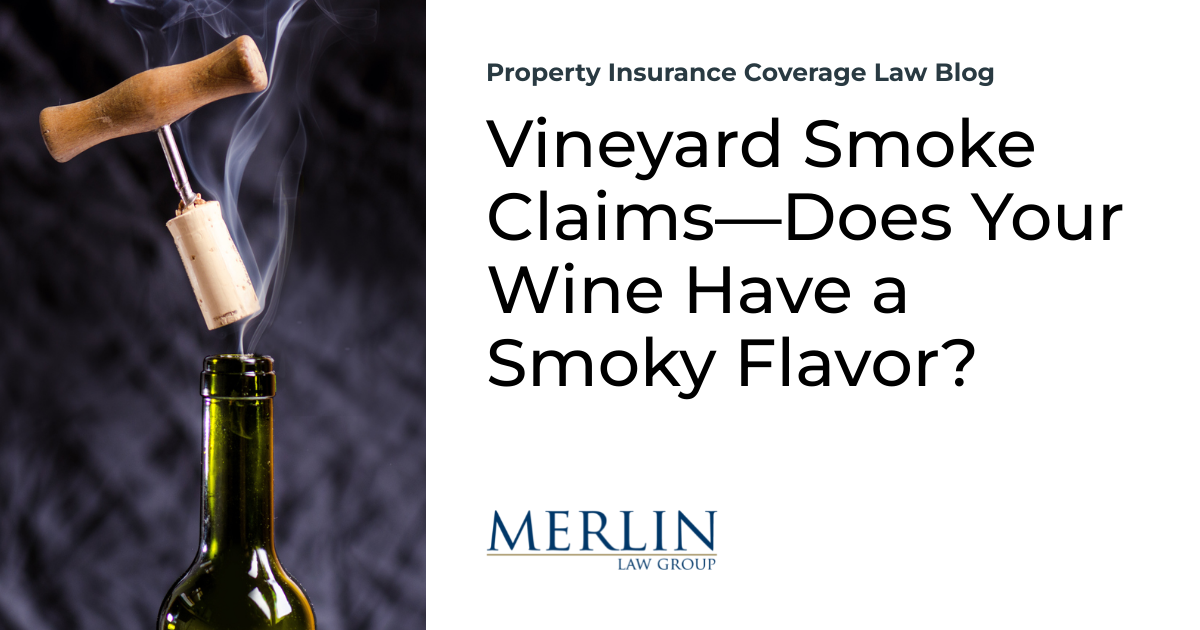 The San Francisco Chronicle published a New Year’s story, “These Elite Napa Estates Release Wines from a Fire-Torn Year. Do They Taste Smoky?”1 The article discussed the problems Napa producers faced regarding smoke residue in their wine production. Many are now releasing wine made during the chaotic fire season of 2020:

Two years after the hazy, chaotic days of the 2020 wine harvest, a season that was ended by widespread wildfires, some Napa Valley winemakers are making a surprising announcement: They made wine in 2020. And they̵

With two major fires in Napa that year — the LNU Lightning Complex fire in August, followed by the Glass fire in September — the entire valley was in a months-long state of panic. Had the penetrating smoke, which sat thick in the air above many vineyards, irreversibly damaged their grapes? No one knew for sure, and with thousands of wineries all asking the same question, the labs that can test for smoke compounds were backed up for months.

“We didn’t turn on the crusher in 2020,” said Elias Fernandez, winemaker at Shafer Vineyards in Napa, referring to the equipment that crushes grapes after they are picked. “Looking back, it was the best thing we ever did to protect our privacy and our brand.”

If these wines inspire regret in some winemakers who wrote off an entire year’s revenue, they should also inspire hope. Even in a season ravaged by wildfires—and 2020 certainly won’t be the last—it may still be possible to make good wine in California.

I discussed this scenario, losses and coverage issues in Vineyard losses from wildfires – a smoky wine is very different from a smoke-damaged wine. There is a lot of science involved in these losses, and many producers will not sell a vintage from 2020, to prevent damage to their brand reputation. A number of property insurance coverage claims have been filed regarding smoke tainted wine.

For example, a fairly recent order on a motion to dismiss2 noted the following:

In the space of about 40 days in 2020, two fires affected Terlatos Napa County vineyards. On or about August 17, 2020, the LNU Complex Fire began and damaged Terlato’s insured property….And on or about September 27, 2020, the Glass Fire began and damaged Terlato’s insured property…. Terlato claims that the two fires were unrelated and that both fires damaged Chimney Rock and Rutherford Hill’s “trellis or vines” and “wine in progress.” … Specifically, Terlato alleges that “smoke dirt” damaged both “vines” and “wines in progress. . . . [S]smoke odor occurs when volatile phenols released by fermentation cause undesirable flavors and odors resulting in wine that tastes or smells smoky, burnt, ashy, or medicinal. Smoky odors can occur when wine is made with grapes that are exposed to smoke before, during or after harvest.’…

Terlato ‘provided [Defendant] notice of their claim arising from the LNU and Glass fires. …Federal paid for some lost or discarded grapes, “but only for damage from the LNU fire, not for damage from the glass fire.” “Wine on tap.” …Defendant “has taken the position that smoke damage to grapes and ‘Wine in Process’ is covered only under its ‘Trellis or Grape Vines’ coverage, and only as an ‘Occurrence’ as defined in the policy.” And the defendant refused to pay “the full amount of Terlato’s covered business income and expense loss incurred.”

Smoke from fires comes in many different forms. The science of smoking is developing. The wineries have so much at stake that they hire the best experts to determine the impact smoke has on their products.

Which got me thinking:

Shouldn’t property insurance companies for smoke-damaged homes and structures invest in the same unbiased, high-level experts immediately after a loss?

The personal safety concerns for policyholders and residents of smoke-damaged buildings are significant, with much more at stake than just money.

Wine is a constant proof that God loves us and loves to see us happy.