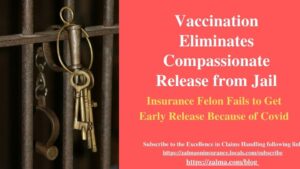 Courts across the United States have granted unvaccinated and sick inmates compassionate release from prison, ignoring the fact that the inmate, if infected, can transmit the disease to the public.

After being disbarred as a lawyer, Mr. Stone in a multi-arson and insurance fraud spree. Mr. Stone was convicted of multiple counts of both mail fraud and wire fraud. In September 2018, he was sentenced to 72 months in prison. According to the Bureau of Prisons, Mr. Stone eligible for placement in a halfway house, and this placement has already occurred or will occur soon.

In 2020, the then presiding judge of this court dismissed Mr. Stone’s first request for release. Mr. Stone again requests a compassionate release based on the following circumstances and allegations:

The government opposed his motion based primarily on its analysis of his medical condition. Mr. Stone has been fully vaccinated and boosted against covid-19, and his medical records show he is being treated for multiple health conditions, including type 2 diabetes, hyperlipidemia, dementia and essential (primary) hypertension. The government also argued that an early release would be inappropriate given the severity and complexity of his crimes and his criminal history. Mr. Stone is in his early 60s. Mr. Stone has not filed a response to the government’s opposition by March 30, 2022.

If a respondent is vaccinated, such as Mr. Stone is, the USDC court has used a rebuttable presumption that the risk of serious harm from covid-19 is not an “extraordinary and compelling” reason under the Code. A defendant may rebut this presumption by offering evidence of an elevated personal risk of serious harm despite the protection of vaccination.

When the defendants provide no evidence that vaccination will not protect them from serious harm from covid-19 and fail to show that the facilities where they are currently incarcerated are experiencing an increase in infections caused by a SARS-CoV-2 variant, the courts motions more often than not.

Although Mr. Stone’s health and age likely put him at risk of severe covid-19 if he wasn’t vaccinated, he cited no evidence to show he remains at risk. While he claims that covid-19 is spreading in the facility where he is housed, the Bureau of Prisons’ covid-19 webpage shows that zero inmates and three staff members are currently infected with covid-19 at FCI Lompoc.

Finally, Mr. Stone has been released, or will soon be released, to a halfway house, where the population will be smaller and thus less conducive to the spread of covid-19. He has not carried his burden to show that his state of health and risk of re-infection are extraordinary and compelling circumstances.

The motion was denied without prejudice to renewal with evidence of an elevated personal risk of serious injury despite the protection of vaccination.

Insurance criminals, like fired attorney Stone, have no honor. Although scheduled to be released for good behavior to a halfway house, he insisted on bothering the district court with a motion for release without providing sufficient evidence. His effort failed although the court allowed him to try again.

Random Thoughts on Insurance Volume XIV: A collection of blog posts from Zalma on insurance —