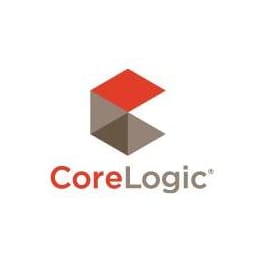 This post is part of a series sponsored by CoreLogic.

Although the COVID-19 pandemic is most of our attention right now, the hurricane season has begun and natural disasters never take a vacation. Forecasts for 2020 have forecast hurricane activities that are higher than average, suggesting higher levels of devastating storm surge.

On August 26, Hurricane Laura landed along the Louisiana coast as a Category 4 storm with a maximum prolonged wind of 150 miles per hour. This made Laura the most intense hurricane to land on the northwestern Gulf Coast since 1856.

CoreLogic analysis suggests that over 626,000 homes were exposed to tropical storms or higher-intensity winds from the hurricane. Although this event was not as devastating as it could have been, it had a significant impact on those who were in the immediate path of the storm.

On the way into the hurricane season, the prospect of facing a major natural disaster such as a hurricane or flood during the coronavirus crisis may seem daunting. But with modern computer and analysis technology that combines hurricane models with property properties and building codes, we can make ourselves more resilient, even during these uncertain times.

How experts predicted the season's severity

Each year, a variety of institutions make their own predictions of the season's hurricane frequency and severity. There are several factors that these forecasts consider ̵

1; the most important of these are sea surface temperatures and the state of El Niño's southern oscillation.

Hurricanes are driven by the evaporation of warm seawater to the lower atmosphere. With higher water temperatures, there will be more evaporation and thus more energy present in the atmosphere. This higher energy contributes to longer and more difficult hurricane systems.

Data indicate that the sea surface temperature is higher than normal. This is especially true in the tropics, the main developing region for hurricanes in the Atlantic.

La Niña is usually associated with an increase in hurricane activity due to lower wind shear in the tropics. Most models predicted that this year would go into neutral conditions, while some of them went further and predicted weak La Niña conditions. 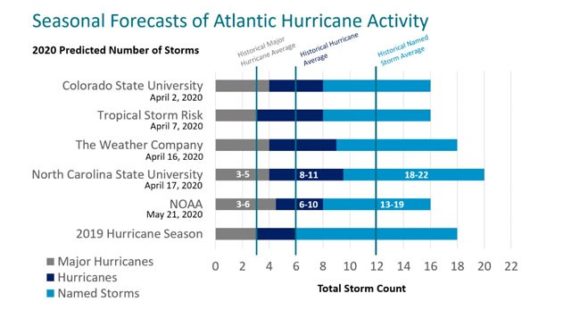 Storm surge is the rise of the ocean due to wind and pressure associated with a hurricane. Once a hurricane lands, the body of water hits the shore in front of the moving storm and moves inland. This rise in water and wind poses a huge risk to life and property. Hurricane Katrina storm surge in 2005 stretched about 60 miles inland with maximum heights approaching 27 feet, and the phenomenon has led to discussion about the threats from severe storm systems.

One of the biggest problems with storm surge is that it is often combined with simultaneous precipitation on land. This means that while there is a mass of water from the hurricane moving inland, there is also a body of water accumulating from precipitation-based floods that would normally disappear down streams and rivers toward the ocean. Consequently, the storm surge exacerbates an already drastic flood situation.

In order to quantify the risk of storm surge, the structure of the land mass itself must be taken into account. This includes factors such as the height of a property, distance from the coast and obstacles such as roadbeds or lakes. Possible impact damage caused by debris from buildings, tree legs or vehicles should also be reported. 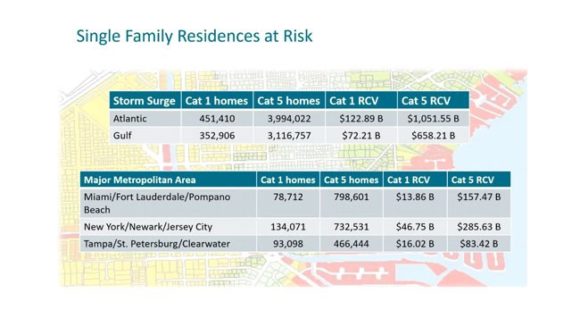 By combining these factors, CoreLogic can create an inventory of all homes that will experience damage from abundance and calculate the reconstruction value in a region.

One of the limitations of modeling risk from storm surge is that without knowing the specific details of the individual storm, one must take 100% loss for each property. With this assumption, it can be estimated that the three largest metropolitan areas with the greatest potential damage to a number of homes are the major cities of Miami, New York and Tampa. For more information on how to quantify the risk of storm surge, download CoreLogic 2020 Storm Flow Report .

Building codes are the primary determinant of a building's resistance to natural hazards. These codes affect all aspects of a structure, including the design of the roof, windows and doors. Within a state, building regulations will often vary by region.

Florida, a state known for its routine susceptibility to hurricane damage, has unique design standards for specific areas. Some regional regulations take into account high-speed debris zones, which help reduce damage from flying debris. But while building codes are constantly improving over time, many communities are not rebuilding. This means that many older communities still have a significantly higher risk of injury. 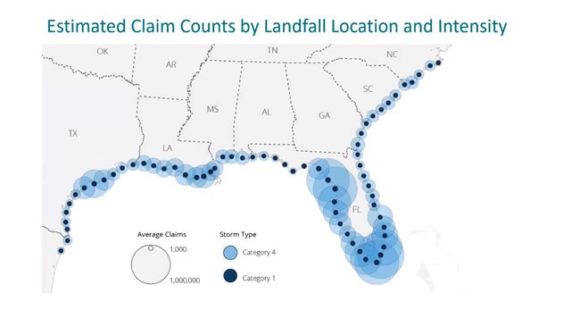 The model runs hypothetical hurricanes with varying landing destinations to estimate which landing sites would result in the most damage. The risk of hurricane damage is highly dependent on the hurricane's land destination and intensity. Across the board, Category 1 hurricanes show a consistent number of average damages regardless of location. For category 4 hurricanes, however, the landing site plays a major role in the number of claims. In the South Florida Tri-County area, the number of claims for a Category 4 hurricane can reach as high as one million.

By reporting the effects of storm surges and incorporating property characteristics and building codes into prediction models, communities and insurers can become more resilient to hurricanes. Hurricane-exposed insurance companies can use these techniques to be more prepared for this year's season.

For example, we can apply the above to today's hurricane activity. 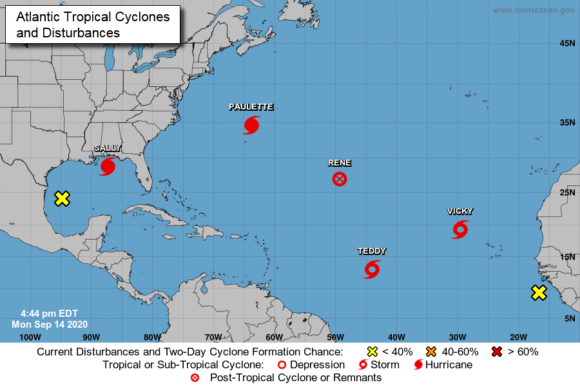 Extreme precipitation in excess of 30 inches has been reported along the Gulf Coast, resulting in an extensive catastrophic flood with several streams that have already risen over 15 feet. Floods are expected to spread further inland as Sally slowly makes its way through southern Alabama and Georgia.

Sally weakened and downgraded to a tropical storm on the afternoon of September 16th. With a Category 2 landing status, Hurricane Sally can affect the following areas with associated reconstruction cost value (RCV). RCV figures assume 100 percent destruction of all risk homes – and represent the worst case.

The insurance industry must apply analyzes such as this consistently over kl. risk areas so that insurers with hurricane-prone portfolios can better plan to protect homeowners and run a more resilient business.

About Saumi Shokraee, Professional, Research and Content Strategy at CoreLogic


Saumi joined CoreLogic in early 2020 and is primarily focused on researching, analyzing and communicating trends in natural disaster and construction in the real estate and insurance industries. Saumi holds a B.A. in Physics from the University of California, Berkeley.


Dr. Thomas Jeffery is a senior risk researcher for CoreLogic Spatial Solutions. He is a leading researcher in the development of various CoreLogic risk data sets, including fire risk, coastal storm risk, earthquake risk and Florida sinkhole risk, and works with many of the top 100 US insurance companies to help implement risk risk models in automated warranty. and pricing systems.

Tom is a nationally recognized leader in risk modeling for wildfires and has been involved in brush modeling since the 1990s. He began his career as a doctor. PhD student at the University of Nebraska, at the Center for Advanced Land Management and Information Technology (CALMIT). Based on his early work on risk modeling of brushstrokes, he continues to investigate and develop brush databases with the most up-to-date geographic information systems (GIS) and remote sensing tools and data available More from Tom Jeffery, Senior Hazard Scientist


Tom Larsen is a Content Strategy Manager for CoreLogic Insurance and Spatial Solutions. In this role, Tom is responsible for subject competence and thought leadership focused on driving revenue growth and profitability goals through the identification of new solution areas and continuous capture of white space.

Tom joined the CoreLogic team in 2013 with the acquisition of EQECAT, Inc., a disaster risk management organization where he held the title of Senior Vice President and Chief Product Architect. Larsen has experience in natural disaster modeling for the insurance and reinsurance industry, and the government since 1989. He has written articles for many industry publications, participated in various industry panels; as well as completed speech assignments on the subject of the economic consequences of natural disasters.

Tom earned a master's degree in structural mechanics from the University of California, Berkeley and a B.S. Master of Science in Engineering from Stanford University. Larsen is based in Oakland, CA. More from Tom Larsen, Rector, Content Strategy CoreLogic

About Daniel Betten, Rector of Researchers


Daniel Betten is a principal researcher for CoreLogic. In this role, Daniel is responsible for meteorological science as it relates to the CoreLogic range of weather verification products including proprietary CoreLogic hail and wind verification technologies.

Daniel is a self-proclaimed problem solver with more than nine years of experience in meteorology. Daniel began his doctorate. while participating in eight different scientific field projects that collected observations of tornadoes, hailstorms and hurricanes. His research has focused on multiple radar synthesis, combined radar analysis with flash data and the development of a complex 3D calculation and visualization method. He has been published in notable industry publications including the Journal of Atmospheric and Oceanic Technology and has co-authored in the Monthly Weather Review, Journal of Atmospheric Science.
He began his career at Weather Fusion, later acquired by CoreLogic which has since become an important part of Insurance & Spatial Solutions Group. During his work at Weather Fusion, he collaborated with industry leaders to provide solutions for hail, wind and lightning damage related to hail repair and roof repairs.


Curtis McDonald has the title professional, Product Management for CoreLogic®. Mr. McDonald joined the company in April 2011 and is responsible for the Weather Verification Services product line. Prior to his product management role, Mr. McDonald also has various roles in sales. Mr. McDonald grew up near St. Louis, MO and was early fascinated by weather and weather phenomena. The great flood of 1993 created his greater interest in weather, especially with heavy thunderstorms. He graduated from the University of Oklahoma in 2010 with a bachelor's degree in meteorology.


David F. Smith is the Senior Leader of the Science and Analytics Group at CoreLogic. He joined CoreLogic through the acquisition of EQECAT 2013 and is responsible for the modeling implementation of CoreLogic's disaster risk models worldwide, including earthquake, flood, severe convective storm, storm surge, tropical cyclone, tsunami, wildfire, windstorm and winter storm in 98 countries covering about 90% of global GDP.

David's previous experience includes work with financial software development and consulting services. He holds an MS in Geophysics from Yale University and a BS in Mathematics from the University of Chicago. He is based in Oakland, California.