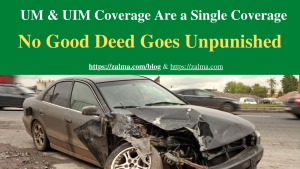 GEICO Advantage Insurance Company and GEICO Choice Insurance Company (collectively, “GEICO”) appealed an order of the Circuit Court of the City of Richmond granting summary judgment to Liosha Miles (“Miles”) on the issue of each of the two policies issued on separate parts of the policy for uninsured motorist (“UM”) coverage and underinsured motorist (“UIM”) coverage. GEICO argued that the statute and each of the applicable policies provide only a single element of coverage applicable to both UM and UIM claims.

On April 18, 2019, Miles suffered extensive personal injuries in a single car accident caused by the negligence of two different drivers. One driver, Carlos Figuero, was insured under an automobile policy issued by Integon General Insurance Company (“Integon”) with a liability limit of $25,000. The other driver (“Doe”) did not stop at the scene of the accident and was never identified, and is therefore considered an uninsured motorist under Code § 38.2-2206(B).

Each of the GEICO policies contained UM/UIM coverage with bodily injury limits of $50,000 per person and $100,000 per occurrence. GEICO concedes that Miles’ injuries from the accident resulted in damages in excess of any available insurance coverage, “however calculated.” On behalf of Figuero, Integon waived its $25,000 policy limit.

The two GEICO policies quickly paid what they believed in good faith were the limits of the policies’ liability.

As a result of these tenders, GEICO Advantage claimed that it had exhausted the limits of its policy’s UM/UIM coverage.

Miles sued to obtain a declaration that each policy contained separate $50,000 limits for UM and UIM coverage. GEICO countered, arguing that each policy provided a single limit of $50,000 for both UM and UIM claims. The circuit court granted Miles’ motion for summary judgment and denied GEICO’s cross-motion.

In matters of statutory interpretation, the Supreme Court’s primary objective is to ascertain and give effect to the legislative intent, as expressed in the language used in the statute.

The parties agree that the dispositive issue in this appeal is whether Virginia law requires an insurer to provide separate UM and UIM coverage in an automobile liability policy or whether UIM coverage is properly understood as part of UM coverage.

Giving the words chosen by the General Assembly their plain and ordinary meanings, the Supreme Court concluded that UIM coverage is a component of UM coverage and does not represent a separate part of coverage available when UM coverage is exhausted.

The fact that the statute requires an endorsement for both UM and UIM incidents provides a sufficient basis for concluding that UIM coverage is an element of the UM endorsement and therefore not a separate part of the policy. Any remaining doubt is extinguished by the language regarding the limits of coverage available under the endorsement required by Code § 38.2-2206(A). The third sentence of the statute establishes coverage limits for the endorsement required by the first sentence of the statute, provided that such “limits shall be equal to but not exceed the limits of liability coverage provided by the policy, unless any named insured rejects the additional uninsured motorist coverage[.]” Code § 38.2-2206(A).

This language reflects a policy decision by the General Assembly to provide insured drivers with some measure of protection against injuries caused by the actions of others, but to limit that protection to no more insurance coverage than the insured driver has chosen to provide for the benefit of others who may be injured by the uninsured or underinsured driver’s actions.

A cap on UM coverage without a corresponding cap on UIM coverage – would represent an anomaly bordering on absurdity. Although the conclusion was compelled by the words of the statute, the Supreme Court noted that it was also consistent with its prior cases dealing with the UM/UIM statute.

Uninsured and underinsured motorist insurance is designed to protect the insured against the risk of being injured by a person who cannot be held responsible for the injury because he fled the scene of the accident or has insufficient insurance to cover the injured party. Unfortunately, insured people like Ms. Miles only minimal insurance to protect themselves and more to protect others. GEICO, in good faith, paid everything they owed and Miles tried to double the coverage with a fanciful analysis of the UM/UIM coverages that simply did not conform to the Virginia statute and policy wording. The good claims handling, due to the severity of her injury, forced GEICO to defend its good deeds before the state supreme court.