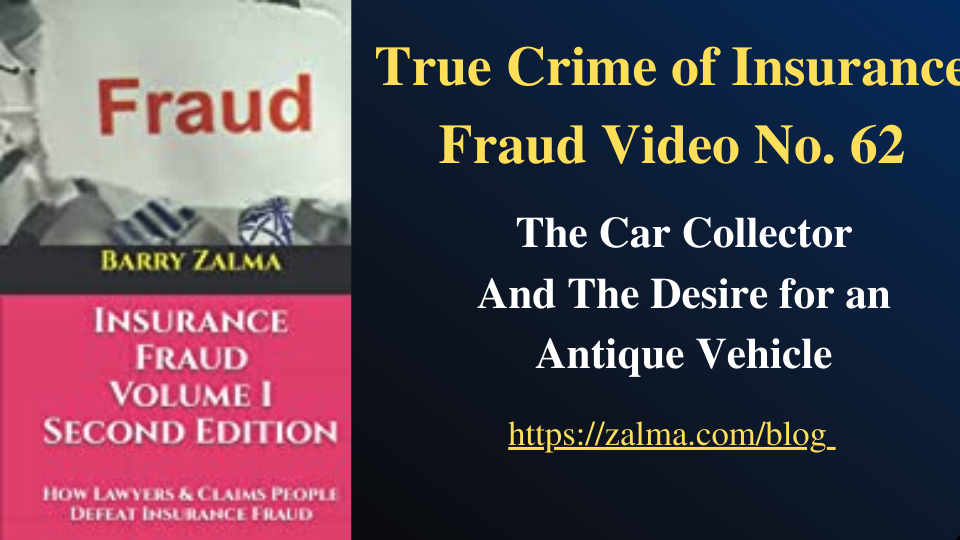 The desire for an antique vehicle

Albert Reiche had a passion for old cars. Because the fund his grandparents set up provided him with an income of $ 3,000,000 a year, Albert never took a job.

He started collecting cars when he turned twenty-one in 1960. He started with a 1924 model A Ford. As the years passed, he bought and restored for his collection an Auburn, two Duesenberg J, a Cadillac touring car from 1928, a Dailmer from 1918, a Willy’s J, a Packard limousine from 1934, a Bentley from 1924 and many other classic cars. He stored his cars in a climate-controlled warehouse.

When Albert turned fifty, he was the proud owner of seventy-five classic cars. Albert had restored all the cars to a clean, new car showroom, condition. For Albert, they were invaluable. Albert would never consider selling. Estimates of car enthusiasts had valued his collection at $ 90,000,000 to $ 125,000,000. He insured the collection with a bunch of British insurance companies with a limit of $ 80,000,000.

Every day Albert spent time with his cars. He dusted, waxed and caressed each car. He made, in his own machine shop, the parts he could not buy for his cars to keep them in new car condition.

Two months later, Albert faced incurable temptations and frustration. One of his sources informed him that the third Dailmer car ever made was for sale for $ 6,000,000. That would be the main stone in his collection. Old Harrah rolled over in his grave to find out that Albert had a car that overshadowed Harrah’s entire collection.

Albert did not have $ 6,000,000 in cash. His fund was set up so that he could not use the capital, but only accept the income from that capital. He had only one million dollars in cash and needed to raise another five. The seller would never reduce his demand because he knew Dailmer was unique. Albert could not bring himself to sell any of his collection. He was desperate. Then he remembered that his trustee had demanded that he buy insurance to protect his collection.

Albert, had to have Dailmer.

Albert had a brilliant plan. He got his two Duesenbergs, a Cord, an Auburn and three Packards moved to his farm in Connecticut. He then broke the lock on his storage facility with a tire iron from a 1957 Chevy and reported that he had been the victim of a burglary. The police, totally blinded by the beauty of the collection, took his report and expressed honest sympathy for his loss. Shortly afterwards, his insurance adjuster visited Albert, who confirmed the forced entry into the warehouse; that the value of the vehicles exceeded the amounts stated on the insurance by at least $ 3,000,000 and recommended that insurers immediately accept the proof of loss for $ 6,540,000 (stated value of the vehicles). The insurer agreed and happily noted that they could have lost much more if the burglars had taken more vehicles.

Albert bought Dailmer, which is now the pride of his collection. Since Albert was never a criminal, as the years passed and the income from his management funds allowed, he moved one vehicle at a time from the Connecticut farm and deposited them on the streets of various communities in the northeastern part of the country. The police would eventually be called, tracing the vehicle back to Albert, who would be happy to regain possession. Because Albert had transferred ownership of the vehicles to his insurers upon payment of the claim, Albert repaid to the insurer the exact amount that the insurer had paid him for the vehicle. Eventually, Albert recovered all the cars he reported stolen. The insurer got back all the money they paid in settlement. Albert’s collection was complete. No one thought they had been harmed by the crime.

Albert lived happily ever after.

Insurance is not a bucket of money for whatever the insured wants. It is a promise to hold another indemnified against the risk of losing property from a conditional or unknown event, not a way to finance the purchase of an antique car.