Truck vs. train – the train wins 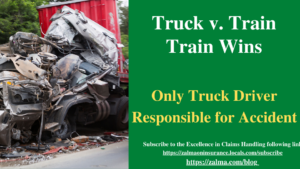 After a collision between an Amtrak train and a truck pulling a trailer, several lawsuits were filed for injuries to people on the train and the widow of the truck driver Bobby Jenkins who died in the accident. The collision occurred when Jenkins, despite warning markers, failed to stop at the point where the private road on which he was driving crossed the railroad tracks. IN Progressive Paloverde Insurance Company v. BJ Trucking Earthmover, LLC. Defendants, et al, No. 21-30379, United States Court of Appeals, Fifth Circuit (July 15, 2022) determined who was liable for the accident and resulting damages.

On the day of the collision, Jenkins was hauling sand in southeast Louisiana. He drove a semi-truck and pulled a dump truck. Both the truck and trailer were owned by BJ Trucking Earthmover, LLC (“BJ Trucking”) of which Jenkins was the sole member. The twenty-seven tons of sand he transported came from the Fluker Pit located on property leased by Fluker Farms, Inc. from Industrial Aggregates of the Florida Parishes, LLC (“Industrial Aggregates”). The private road Jenkins was driving on was allegedly owned by Kent Enterprises, LLC (“Kent”).

Jenkins neither slowed nor stopped at the intersection as he approached it. Video surveillance recorded by the train determined that as Bobby Jenkins approached the crossing, he ignored the stop sign and crossbucks and did not slow down. Jenkins entered the crossing and he and the vehicle were struck by the train.

Jenkins’ widow, Katy Jenkins, filed the original lawsuit in state court. A series of related cases were then consolidated.

Progressive Paloverde Insurance Company (“Progressive”) insured the truck that Jenkins was driving. Heck Industries, Inc. (“Heck”) was alleged to have been Jenkins’ employer at the time of the accident, but Heck insists that Jenkins was working as its independent contractor.

Heck filed a defense and indemnification claim with Progressive because Heck was named an additional insured on Jenkins’ policy. Gray Insurance Co. (“Gray”) insured Heck, but maintains that its policy only provides excess coverage for Heck. Gray argues that progressive politics should be primary. Progressive filed a declaratory judgment complaint to determine whether it (Progressive) owed any defense or indemnification to any of the named parties.

In a series of decisions on summary judgment, the district court has concluded:

CAUSE OF THE COLLISION

Injured persons employed on the train brought their claims under the Federal Employers Liability Act (“FELA”). The FELA provides the exclusive remedy for a railroad employee engaged in interstate commerce whose injury resulted from the railroad’s negligence.

Awarding summary judgment to the defendant railroad is appropriate only when there is a complete absence of evidentiary facts supporting a jury verdict in the plaintiff’s favor.

Under Louisiana law, a motorist approaching a railroad crossing marked by a stop sign must “stop” and may not proceed until he can do so safely. When the crossing is marked with a cross, such motorist must listen and look in both directions along such track for any approaching train and for signals indicating the approach of a train. He must yield the right of way to any oncoming train and shall then proceed only after taking due care and after he is satisfied that it is safe to proceed. A motorist’s failure to meet these obligations has legal consequences.

There was no evidence of defects in the junction. Amtrak met the burden by providing a crossing passable by a motorist using reasonable care. That’s especially true in this case because Jenkins was familiar with the intersection: he had crossed it almost daily for several years.

Employers are liable for injuries caused by their employees, but a principal cannot be held liable for the actions of an independent contractor. Jenkins was not Heck’s employee. Heck is therefore not responsible for Jenkins’ actions.

The question of whether an actor is an employee or an independent contractor can be resolved by law when the facts are not disputed. The element of control that distinguishes an employee from an independent contractor focuses on whether the alleged employer had the right to control the method and means by which the individual performed the tasks. It matters less what monitoring and control is actually exercised; the important question is whether by the nature of the relationship there is a right to do so.

Heck had no control over the manner in which Jenkins completed his work. Heck-based payment to Jenkins for each discrete load. Jenkins controlled his own schedule, and either he or Heck could have ended the relationship at any time. The district court is correct that Heck did not exercise – and did not have the opportunity to exercise – control over the manner and means by which Jenkins completed his work.

Jenkins’ policy with Progressive names Heck as an additional insured. Heck pleaded that Progressive was “obliged to defend, indemnify and insure Heck” for the accident. However, the district court agreed with Progressive that its non-trucking exclusion barred coverage of Heck.

At the time of the accident, Jenkins was hauling twenty-seven tons of sand. The non-trucking exception applies because Jenkins was indisputably transporting property at the point of collision.

The trial court was correct in holding that Progressive’s policy did not cover Jenkins’ truck or its trailer during this accident because those vehicles were undoubtedly transporting property. And that feature was clearly excluded from coverage.

No party to this appeal has standing to appeal the dismissals of Industrial Aggregates or Gray. Their dismissals must therefore stand. Likewise, Kent was properly dismissed from this appeal by joint motion.

The district court did nothing wrong.

Mr. Jenkins limited the insurance coverage he purchased to protect third parties he might injure while driving his tractor and obtained insurance that excluded coverage when he was transporting property. He was clearly negligent and that negligence caused his death as well as injury to those on the train and the train itself. No coverage for anyone and the finding that he was solely responsible for the accident and injuries the injured party could only collect from his estate. Sad for the injured who would not have been injured if he had stopped at the crosswalk.