The plaintiff’s expert notes a lack of coverage 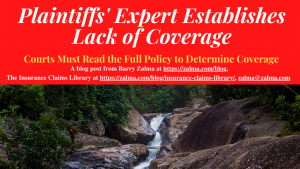 Plaintiffs Joshua and Rachel Dow purchased their home at 1017 Moss Creek Drive in Hurricane, WV in March 2018. This property is adjacent to the Valley Park Wave Pool. After plaintiffs purchased the home, they entered into a first-party insurance policy with defendant Liberty Insurance Company. Beginning in June 2018, Plaintiffs noticed water entering their property and leaking into the crawl space of their home.

The water flowed from the edge of the ditch on a neighboring property into their yard. This ditch ended 2,030 feet from plaintiff’s property and had been carrying water downhill toward the river for years, even before the nearby Wave Park was built. For many years this ditch carried water without damaging the Plaintiff’s home. However, the Putnam County Commission constructed a maintenance building on the property at Wave Park in 2018, raising the ground. Construction of the maintenance building was completed in March 2018. Due to the elevation change, heavy rain and water problems in the Wave Park overwhelmed the ditch and forced water into the plaintiff’s yard, which entered the crawl space of their home.

Liberty’s claims specialist was informed that the county was in litigation over the matter and would not discuss anything with the insurer. The defendant formally denied the claim on November 28, 2018. In the denial email, the claims specialist said the claim was denied because water had “traveled through the ground,” which was excluded under the policy.

Defendant attached a full copy of Plaintiffs’ policy to their motion to dismiss. The full policy excludes “flood, surface water, waves, tides, inundation of a body of water, or splash from any of these, whether driven by wind or not; (2) discharge of water held by a dam, levee, embankment or by a water or flood control device or structure; b. Water below the surface of the ground, including water that exerts pressure on or seeps or leaks through a building, sidewalk, driveway, foundation, swimming pool or other structure.”

The plaintiff sued. An engineering expert retained by the plaintiffs opined that the topography as it currently stands forces and directs the water from this watercourse onto the plaintiff’s property and into the crawl space of the plaintiff’s home.

Inherent in the claims is the question of whether the damage sustained by the claimants is covered by the terms of the insurance. When a policyholder shows that an injury occurred while a policy was in force, an insurance company seeking to avoid liability by enforcing an exclusion has the burden of proving the facts necessary to enforce that exclusion. The insurer must also prove that the claimed applicable exclusion is valid, unambiguous and substantiated.

Validity of the exemption from water damage

Defendant specifically identified additional exclusions that would further limit the number of known water damage claims. Furthermore, there was already a broad exclusion for water damage in the basic policy, demonstrating the defendant’s intention to largely exclude coverage for water damage in its policies. Although the defendant omitted the particular phrase “water control device or structure” from its summary file, it is essentially synonymous with the specifically stated sources of water damage, such as “dam,” “levee,” and “levee,” and the court concluded. that the exclusion used by the Defendant to exclude coverage for the water damage to the Plaintiff’s home is valid.

Ambiguity in the Water Damage Exemption

A court interpreting a policy should give the language of the policy its plain, ordinary meaning. Where the words of the policy are clear and unambiguous, it is not the court’s role to judicially construct or interpret meaning, but rather to give full effect to the intended plain meaning.

It was clear to the court that the plain, ordinary meaning of the words leaves the meaning of this exclusion policy clear. First, the reference to a “water device or structure” must be read in conjunction with the other, specific terms in the exemption: “dam,” “levee,” and “embankment.” Standing alone, the phrase “water control device or structure” may be ambiguous, but the court must read the phrase in the context of the entire exclusion provision, including the underlying basic policy’s water damage exclusion.

The fact that it is plaintiffs’ expert testimony that supports the coverage exclusion is irrelevant to the application of that testimony to the summary judgment analysis. The court can, and properly did, the plaintiff’s expert opinion, and the expert opinion supported the exclusion of coverage.

This court was sympathetic to the plaintiffs and the hardships they have experienced due to the damage to their property. Unfortunately for the plaintiffs, coverage was not obtained for this water damage under their insurance.

RTFP: Read the entire policy is key to interpreting an insurance contract. The court did so and applied the entire policy and its meaning was clear when read in its entirety. The case established that it is improper to attempt to change the meaning of a policy by taking part of the policy out of context and ignoring the full wording of the exclusion and the policy.