The plaintiff cannot create an ambiguity 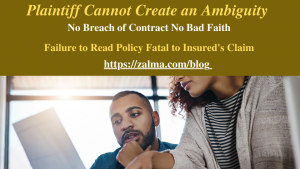 Failure to read the policy fatal to the insured’s claim

Michel Ngakoue sued his insurance company, Safeco Insurance Company of Indiana, after his claim under his landlord protection insurance was denied.

There were three buildings on the property: two residences to be rented out as residences and a “main building” that could be used for commercial purposes (the “Main Building”). The plaintiff claims that he purchased the property with the intention of opening several rental properties and using the main building as a community center to which the premises could be rented out for various meetings and parties. After purchasing the property, plaintiff claims, he began using the main building “for commercial purposes and not as a residence.”

The policy provides coverage for certain “accidental direct physical losses” to the “dwelling” and “other structures” on the property, specifically excluding coverage for property used for commercial purposes.

Section A of the policy provides coverage for “the dwelling at the described location shown on the declarations, used principally for residential purposes.” The policy excluded coverage for other structures “used in whole or in part for commercial, manufacturing or agricultural purposes.”

Plaintiff alleged that on February 20, 2021, the main building sustained direct physical damage as a result of a severe winter storm, with extensive interior damage, including walls, roof, floor, and fixtures, due to a storm that created breaches in the roof.

The plaintiff claimed that the damage to the main building was approximately $24,326.39. On April 16, 2021, the defendant denied the claim because it could not identify any hail-related damage to your property.

Plaintiff sued alleging breach of contract, common law bad faith, fraud, and violations of the TDTPA and Sections 541 and 542 of the Texas Insurance Code

Because this case was removed from Texas state court on diversity jurisdiction, Texas substantive law applies. Texas law requires courts to apply a burden-shifting system. Initially, the insured has the burden of establishing coverage under the policy and if it does so, the defendant must prove that an exclusion applies.

The plaintiff alleged that the defendant wrongfully denied and mishandled his insurance claim.

The policy contains a provision that excludes coverage for “other structures . . . used in whole or in part for commercial, manufacturing or agricultural purposes.” Defendant argues that this “clear and unambiguous” exclusion bars coverage under the policy because: “It is undisputed that Ngakoue used the structure as an event center for commercial purposes.”

The plaintiff admitted that he used the main building “for commercial purposes and not as a residence”.

The commercial purpose exclusion is not ambiguous

Waiver and Estoppel do not create coverage

Plaintiff also argued that Defendant should be estopped from relying on the policy’s commercial purpose exclusion because it failed to do so in its first denial letter dated April 16, 2021. Because Defendant did not seek forfeiture of the policy, but instead argued that the policy does not cover one of the three buildings on the Property. The defendant continued to provide insurance coverage to the other two buildings on the property until the plaintiff canceled the insurance in June 2021 so that estoppel was not established.

In Texas, the doctrine of estoppel cannot be used to create insurance coverage when none exists under the terms of the policy. Waiver and estoppel may operate to avoid a forfeiture of a policy, but they have consistently been denied operative power to alter, rewrite, and enlarge the risks covered by a policy. In other words, waiver and estoppel cannot create a new and different contract with respect to risks covered by the insurance. [Texas Farmers Ins. Co. v. McGuire, 744 S.W.2d 601, 603 (Tex. 1988) (cleaned up); accord Minnesota Mut. Life Ins. Co. v. Morse, 487 S.W.2d 317, 320 (Tex. 1972)]

Because Plaintiff’s breach of contract claim fails, so do his claims of bad faith and statutory violations based on coverage issues and the denial of his claims. As a result, the Magistrate Judge recommended that the District Court grant Safeco Insurance Company of Indiana’s Motions for Summary Judgment and dismiss the Plaintiff’s lawsuit.