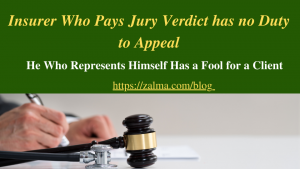 The insurer is penalized for having fulfilled the contractual terms

IN Fiaze Issa v. Allstate Insurance2022 IL App (1st) 210343-U, No. 1-21-0343, Court of Appeals of Illinois, First District, Sixth Division (December 16, 2022) Mr. Issa sued its insurer for legal malpractice after defending its insured against a judgment, paying it in full, and denying Issa’s request that it appeal the judgment.

Mr. Issa, although not personally liable for any part of the ruling, wanted Allstate to appeal the ruling. Allstate declined to do so. Mr. Issa then applied a pro complaint against Allstate for malpractice and breach of duty, alleging that his insurance premiums had increased as a result of the judgment against him.

The circuit court granted Allstate’s motion to dismiss the complaint, and Issa appealed.

On October 15, 2017, Issa was an insured driver under Allstate’s auto insurance when he rear-ended Alicia Contrera’s vehicle. Mrs. Contreras sued Issa, seeking damages for property damage and personal injury. Allstate defended Mr. Issa in that action, which Mr. Issa’s claim resulted in a jury verdict for Ms. Contreras in the amount of $14,000.Mr. Issa further alleged that Allstate paid an additional $6,000 to Ms. Contreras for damage to her vehicle. Allstate disputed the figures, but the parties agreed that the total amount paid to Ms. Contreras fell well short of Mr. Issa per person limit of $100,000.

Mr. Issa, acting as his own attorney, sued Allstate, alleging both that Allstate’s counsel negligently committed certain errors at trial and that Allstate breached its duty to defend him at trial by failing to appeal the jury’s verdict. Mr. Issa sought $1,981.88 in damages – the amount he claimed Allstate had overcharged him for insurance coverage after his accident.

The trial court held that Issa had failed to state a claim upon which relief could be granted and, specifically, that he had failed to cite any legal authority establishing a duty to appeal the jury’s verdict in the Contreras case. The court agreed that Allstate owed Mr. Issa owed a duty of good faith and fair dealing, but concluded that it had satisfied that duty by defending him in the underlying lawsuit and fully indemnifying him for the damages awarded to Ms. Contreras.

To make a claim for legal error, a plaintiff must allege facts showing that:

In cases involving litigation, there is no legal malpractice unless the attorney’s negligence resulted in the loss of an underlying cause of action. Mr. Issa’s only claim is that the damages awarded to Ms. Contreras was pumped.

However, since there was no adverse assessment that exceeded the policy limits in this case, there was no breach of duty by Allstate.

There was no doubt that Allstate both fulfilled its duty to defend Issa in the Contreras case and to indemnify him for the full amount of the jury verdict awarded to Ms. Contrera’s advantage. Under these facts, Allstate had no duty to appeal the judgment.

Dismissal of plaintiff’s complaint with prejudice was affirmed where plaintiff failed to state a claim for legal error or for breach of duty based on his insurer’s election not to appeal a jury verdict that fell within the policy limits.

Proving that no good faith on the part of an insurer goes unpunished, Mr. Issa Allstate who did everything they promised to do under the policy – ​​they defended Issa through a jury trial – and paid the jury verdict well within the policy limits. Because Allstate could have made a pretrial settlement of its choice, the verdict was within its absolute right. If Issa’s premium increased, it did so because he neglected Ms. Contreras. He, as his own lawyer, wasted the time of the court and his insurer and cost them both a lot of time and money to manage his case and appeal that he had no potential to succeed.