The insurer must act to protect its insured 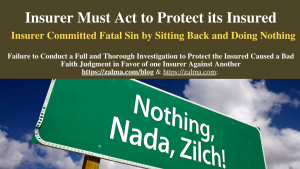 Every liability insurer is required to conduct a thorough and prompt investigation and, if liability is established, must pay to settle the claim to protect the insured. Failure to do so, where a potential judgment of $40 to $50 million was presented to three insurers with a limit of $1 million and an offer to settle for $2 million, two insurers paid and a third retained its rights and did nothing which forced an excess insurer to pay to avoid a $50 million judgment at trial.

Ernest Guthrie fell from a roof and was paralyzed from the waist down, never to walk again. Within months, his medical bills climbed past $400,000, and future costs are estimated to be in the millions.

The primary insurer for Guthrie’s business was SouthernOwners Insurance Company. SouthernOwners refused to pay Guthrie any amount to settle the claim, and American Builders and Evanston each pledged $1 million.

American Builders then sued Southern-Owners for common law bad faith under Florida’s doctrine of equitable subrogation. The record does not show that Southern-Owners did anything other than request extensions.

At the close of all evidence, the jury returned a verdict in favor of American Builders, and the district court entered a final judgment of $1,091,240.82.

The bad faith conduct must directly and in a natural and continuous manner induce or substantially contribute to causing such damage, so that it can reasonably be said that the damage would not have occurred but for the bad faith conduct.

The Eleventh Circuit concluded that a bad faith inquiry is determined by the “totality of the conditions” standard and the court must focus not on the actions of the plaintiff but rather on the actions of the insurer in fulfilling their obligations to the insured. That said, a plaintiff’s actions—such as a decision not to offer a settlement—remain relevant in assessing bad faith.

The Eleventh Circuit concluded that there was sufficient evidence to permit the jury to reasonably find that Southern-Owners acted in bad faith because it delayed acting on its duty to investigate and resolve Guthrie’s claim.

This amount of evidence could lead a reasonable jury to conclude that Southern-Owners delayed its investigation rather than attempting to resolve the coverage dispute expeditiously or using diligence and care. In that delay, a jury could reasonably find that Southern-Owners completely neglected its affirmative duty to initiate settlement negotiations while Guthrie’s hospital bills were climbing due to his traumatic injury.

Southern-Owner’s contract with Beck Construction stipulated that “[n]o the insured will, except at the insured’s own expense, voluntarily make a payment, assume any obligation or incur any expense, other than for first aid, without our consent.” “[T]his language requires the insured to obtain the insurer’s consent before settlement.” Am. Reliance Ins. Co. v. Perez, 712 So.2d 1211, 1213 (Fla. 3d DCA 1998). The Florida Supreme Court requires an insurer to establish three things in order to succeed with this affirmative defense:

The first element has some exceptions. Even if the insured was required to obtain consent, the failure is not an affirmative defense unless the insurer also establishes substantial prejudice and demonstrates good faith in obtaining the insured’s cooperation. Southern-Owners did not meet this requirement

A reasonable jury could (and did) clearly find that the Southern Owners did not “show that ․ [had] exercised diligence and good faith.” American Builders did everything it could to investigate Guthrie’s claim and decide whether the insured would pay out, all while Southern-Owners sat back and watched the co-insured act in good faith toward the insured.

The most important sin an insurer can commit is to sit back and watch others react while its insured faces a multi-million dollar claim. The Southern Owners sinned and were punished by the Eleventh Circuit. It is important for every claim investigation that it is carried out quickly, carefully and in good faith. To sit back and wait for the insured, the injured party, or the co-insurers to act is a clear and unequivocal failure to act fairly and in good faith against the insured, whom the contractor alleged was responsible for Guthrie’s injuries.