The insurer is awarded damages for fraud 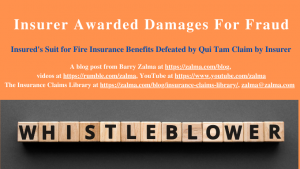 IN Lisa A. McCullough v. Metlife Auto & Home, No. 4:20-CV-01807, United States District Court, MD Pennsylvania (September 30, 2022) McCullough sued to try to compel MetLife to pay the plaintiff for an insurance policy on McCullough’s home, which was destroyed in a 2019 fire.

MetLife sought a default judgment. In January 2022, this court granted MetLife’s motion and requested information and evidence of any damages sought by MetLife. MetLife has filed a brief and evidence listing its damages. MetLife has also requested review of the pleadings pursuant to Federal Rule of Civil Procedure 12(c). For the following reasons, MetLife’s Rule 12(c) motion will be granted and its motion for default judgment will be granted in part and denied in part.

When a court hears a motion for judgment on the pleadings, the court presumes the truth of all factual allegations in the plaintiff’s complaint and draws all inferences in favor of that party. However, it does not presuppose the truth of any of the legal conclusions of the complaint

Pennsylvania law provides that an individual commits the crime of insurance fraud if she “[k]now and with intent to defraud any insurer or self-insured, presents or causes to be presented to any insurer or self-insured any statement forming part of or in support of a claim containing false, incomplete or misleading information as to any fact or anything material to the claim.”

Although these elements are set forth in a criminal statute, the statute additionally allows aggrieved insurers to bring civil actions against violators of the statute “to recover compensatory damages, which may include reasonable investigative costs, costs of trial, and attorneys’ fees.”

Additional facts indicated that the plaintiff started the fire, such as her moving important documents before the fire and the discovery of newly purchased gasoline cans with remaining gasoline in the home, after the fire. The plaintiff “submitted a claim to the defendant for the alleged loss resulting from the fire” and thereby presented “false, incomplete and/or misleading information about the claim and the cause of the fire.”

Since the plaintiff did not appear before the court, the court must, according to the rule of practice, conclude that there are no material facts in dispute. MetLife’s factual allegations raise a reasonable inference that plaintiff committed insurance fraud. Accordingly, MetLife’s Rule 12(c) motion is granted.

After finding that MetLife satisfactorily pleaded a civil claim for insurance fraud, the court considered its damages. MetLife sought $26,069.01 in “pre-trial investigative costs.” It has provided the court with invoices for the companies hired to investigate the fire at McCullough’s home to support its advance costs request. The court found this evidence sufficient to award costs in advance without an evidentiary hearing.

The invoices submitted by MetLife did not indicate whether multiple attorneys worked on this matter or just William J. McPartland, Esq. Additionally, the invoices did not explain how many hours were billed for or the hourly rates for Mr. McPartland and any other attorneys working on the case. There are also no certificates that prove these hourly prices as the prevailing market prices in society. Without this information, the court could not determine a reasonable fee for counsel’s efforts.

Accordingly, MetLife’s motion for default judgment was granted in part and denied in part with respect to the damages it sought and the court offered to reconsider if sufficient particulars were provided as to the attorneys’ fees sought.

Insurance fraud, especially arson for profit, is both a crime and a defense to a breach of contract claim by the insured arsonist. When Met Life filed its cross-claim, the insured and her counsel saw the writing on the wall and refused to participate. As a result, the insurer obtained a judgment against the insured that may or may not be collected. The judge, with a finding of fraud, should have referred the case to the local US Attorney for prosecution.