The insurer cannot wash away its duty to defend 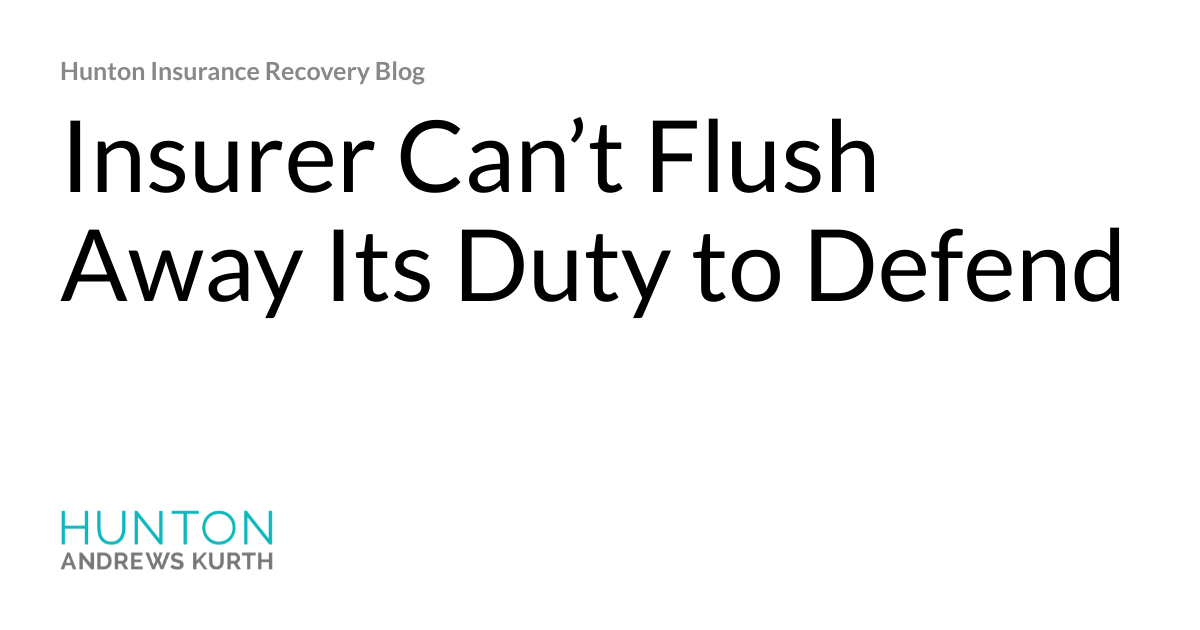 In a recent opinion, the Northern District Court of Illinois reaffirmed the basic principle that an insurer’s duty to defend is broad and is triggered by all allegations in a complaint that potentially fall within a policy’s coverage allowance. IN Harleysville Pref. ins. Co. v. Dude Products Inc., et. al.objective No. 21-c-5249 (ND Ill. Dec. 21, 2022), the insured, Dude Products, Inc., sought coverage from its insurer, Harleysville Preferred Insurance Company, against a class action alleging that Dude Products intentionally and falsely marketed its wipes as “ flushable” even though the product allegedly did not break and cause “clogging and other drain damage”

Harleysville had issued a commercial general liability policy and an umbrella liability policy to Dude Products, which provided coverage for “property damage” caused by an “occurrence” during the policy period. The policies also contained exclusions for “expected or intended damage”, which excluded coverage for property damage expected or intended from the insured’s point of view, and for “damage to damaged property not physically damaged” arising from a defective or dangerous condition in the insured’s product. Harleysville filed a declaratory judgment motion to obtain an order that it was not obligated to defend or indemnify Dude Products under the CGL or umbrella policies. Harleysville argued, among other things, that there was no “occurrence” because the class action complaint contained allegations of intentional misrepresentation, there were no allegations of “damage to property” and the “anticipated or intended damage” and “impaired property” exclusions would apply to to exclude coverage.

The court noted that “[u]under Illinois law. . . an insurer’s “duty to defend under a liability policy is such a fundamental duty that a breach of that duty constitutes a repudiation of the contract.” The court then analyzed the allegations in the class action, noting that even if the plaintiffs did so. did not use the specific term “property damage,” there were factual allegations that included property damage, including the allegations of damage in the form of “clogging or other drain damage.” By the same reasoning, the court found that the class action complaint also alleged an “occurrence,” which, under Illinois law, “harms something other than [insured’s product] itself constitutes an ‘event'[.]’” There were no allegations that Dude Products intended the type of damage its products caused and there was no causal connection between Dude Products’ alleged intentional misrepresentation of the use of its product and the actual property damage its product caused. For the same reason, the court rejected Harleysville’s argument that the “anticipated or intended harm” exclusion applied. Finally, the court explained that the “impaired property” exception does not apply to third-party property that is physically damaged, such as the alleged damage to the putative class’s sewer system. Harleysville’s duty to defend was therefore triggered.