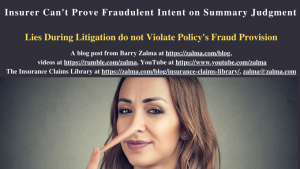 Mariana Gracia appealed the trial court’s grant of final summary judgment in favor of Security First Insurance Company (“Security First”). The trial court found that Gracia had made affirmative misrepresentations regarding the condition prior to the loss of her property, which warranted forfeiture of coverage under the concealment or fraud provisions of her homeowner’s insurance. Mariana Gracia v. Security First Insurance Company, no. 5D21-1456, Florida Court of Appeals, Fifth District (September 9, 2022)

Security First insured Gracia for the risks of loss of her home in Orlando, Florida. Gracia reported a loss due to roof damage allegedly caused by a storm. Security First investigated the claim and extended approximately $11,000 in damages coverage. But Gracia then filed a sworn proof of loss, claiming more damages than Security First had covered.

After Security First denied the additional claim, Gracia sued alleging breach of contract and seeking additional damages to cover roof repairs and interior water damage. During her deposition, Gracia revealed that a home inspection had been performed in 2015, before she purchased the property. When asked about the results of the inspection, she said, “Everything was fine” and that “the roof was in good condition.”

After Security First obtained the 2015 inspection report, the company amended its affirmative defense to include the policy’s concealment or fraud provisions because the inspection report showed the property had roof and ceiling damage in 2015. The inspection report included photographs revealing the damage and specifically noted roof leaks around the chimney, water damage to the attic and interior roof damage caused by areas of water consistent with those noted by Gracia in her instant claim.

Security First moved for summary judgment on several grounds but focused exclusively on its concealment or fraud defense at summary judgment. The district court agreed with Security First. In order to obtain summary judgment, Security First was required to establish that Gracia’s statements regarding the condition prior to the loss of her property were made with intent to mislead. Because this case was decided under the new Florida Rule of Civil Procedure 1.510, summary judgment is appropriate when “the evidence is such that a reasonable jury could not return a verdict for the non-moving party.” In re Amends. to Fla. R. Civ. P. 1,510317 So.3d 72, 75 (Fla. 2021) (citing Anderson v. Liberty Lobby, Inc.477 US 242, 248 (1986)).

The trial court interpreted this new standard to allow it to weigh and assess the credibility of the evidence. Credibility determinations and the weighing of evidence are jury functions, not those of a judge, when deciding a motion for summary judgment. Gracia argued that where Security First relied on subsection (3) of the concealment or fraud provision, it was required to meet its initial burden of establishing that her statements were made with intent to mislead and were material. She argues that there was no such evidence and that the trial court effectively decided these factual issues when it granted summary judgment.

The Court of Appeal found it important to highlight the distinction between misrepresentation during the insurance application process and misrepresentation in the post-injury context. On the former, Florida law is clear: an insurer may later void a policy based on an insured’s false statement without showing intent to mislead. A misrepresentation need not be made fraudulently or knowingly but need only affect the insurer’s risk or be a fact which, if known, would have induced the insurer not to issue the policy or not to issue it to such a large amount.

A different standard applies to false statements in the post-loss context, requiring proof of intent to mislead. For post-loss conduct, the policy requires proof of knowing or willfully fraudulent conduct by the insured to trigger the application of the “Concealment or Fraud” provision to void the policy. At least part of the “concealment or fraud” provision will be made redundant if subsection (3) is read to waive a requirement of intent, then subsections (1) and (2) introducing a requirement of intent will be redundant: only Proof of wrongdoing according to subsection (3) would lose coverage, eliminating any need for proof of intentional misrepresentation or fraud so prominent in subsec. (1) and (2). In these circumstances, where either of the competing interpretations will render any language an invalidity, the rule of construction requiring the avoidance of interpretations that render any language redundant loses traction.

The fault is not in the rule of construction but in the policy language. The Court of Appeal interpreted the reference to “false information” in the “Concealment or Fraud” provision as requiring an element of fraudulent intent. Although it has been argued below that fraudulent intent was not required, Security First argues on appeal that certiorari is warranted because its evidence established Gracia’s intent to mislead beyond a reasonable doubt. Simply put, issues of fact relating to fraudulent intent or state of mind are generally not ripe for summary judgment.

Had Security First required Gracia to submit to an examination under oath and found that she lied about the pre-insurance inspection report, their summary judgment would have been granted and affirmed because the misrepresentation or concealment predated the filing of the suit. They only learned of the fraud in a deposit that is not part of the claims process. There is no doubt that Gracia had the report prior to purchasing insurance from Security First and should have disclosed this to her insurer. At trial, Security First will introduce this evidence or file a new summary judgment motion with an affidavit from the insurer who will likely testify that the policy would not have been issued had the insurer known of the existing injury.