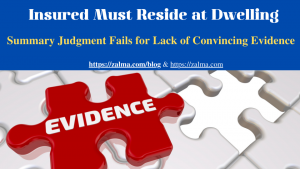 Plaintiff Craig Finch owns properties in Broome County, New York, of which the relevant ones for our purposes are one on Kennedy Road (the subject premises) and another on Bishop Road. A single-family home was located on the subject premises, while a second home was approximately 300 meters away on the Bishop Road property. Homeowner’s insurance for the subject premises was obtained through defendant Erie Insurance Company and named Finch as insured. Erie argued that Finch did not live in the residence and denied his claim on that basis.

A fire severely damaged the subject premises on the evening of November 22, 2016. The plaintiff notified the defendant of the loss and stated that hot ash in a vacuum cleaner on the porch had caused the fire, and the subsequent investigation conducted on behalf of the defendant confirmed that the fire was accidental and had started on the porch. The investigator was unable to determine the cause of the fire but could not rule out the vacuum cleaner.

The defendant waived coverage on the grounds that the plaintiff did not reside in the relevant premises as required and that, by installing a pellet stove where the hot ash originated, he had significantly increased the risks that existed there.

Finch sued, alleging that Erie had breached the insurance contract by denying coverage.

Both parties sought a verdict. The trial court denied the motion and cross motion, and Erie appealed.

The defendant, as the party seeking to waive coverage on the ground that the plaintiff was not a resident of the subject premises, bore the burden of establishing that the exclusion or exclusions apply and are not subject to any other reasonable interpretation.

The policy provides coverage “for loss to… [plaintiff’s] residence in the residential premises,” with the latter term defined as “the residence there [plaintiff] stay[s].” What constitutes a residence is not defined in the policy and is therefore construed against the defendant as the insurer, but it is well established that residence requires something more than temporary or physical presence and requires at least some degree of permanence and intent to remain.

A person can have only one domicile but more than one residence for insurance purposes, and the question of whether a person resides in a particular place is a fact-driven investigation that depends on the totality of the circumstances.

Erie produced evidence indicating that the claimant did not live on the subject premises, including that he had mainly lived at the Bishop Road property for nearly a decade prior to the fire, that his sister lived on the subject premises in exchange for her making mortgage payments and covering other expenses, and that he had expressed an intention to transfer ownership of the premises in question to her, all of which were serious indications that he was not a resident of the residence.

From the record, the Court of Appeal noted, it was made clear that the plaintiff continued to have significant connections to the subject premises and that he gave conflicting accounts of what his actual plans were for it.

For example, the claimant testified that the premises in question had been his parents’ residence, that he lived there with them when he purchased it around 2001, and that it had been consistently occupied by either him or members of his family. Plaintiff testified that he performed all maintenance and repairs on the subject premises while his sister lived there, and that he continued to both store many personal effects and receive mail there at the time of the fire. The plaintiff also made it clear that he was on the subject premises every day for both maintenance and recreational purposes and that he could and did sleep there on occasion.

Although plaintiff testified that he intended to transfer ownership of the subject premises to his sister when she paid off the mortgage, he also gave conflicting testimony stating that he wanted to move back there after he “g[o]t [his] sister set,” and he explained in an affidavit that his plan was to do so after rehabilitating the home on the Bishop Road parcel for his sister.

The order was confirmed.

The residency requirement has been ignored by insurance agents, insurance brokers and people looking for home insurance. As a result, many lawsuits, like the one filed by Finch, continue to find themselves in the trial and appellate courts. The evidence presented by Finch established that the residence was his residence because he received mail there and spent a lot of time at the residence. However, it was not his residence but was his sister’s residence. The entire dispute would have been resolved if Finch had named the policy as an insured, his sister, and added himself as an additional insured. He did not. At trial, the insurer will have to present evidence that Finch was not “resident” of the premises where the fire occurred.