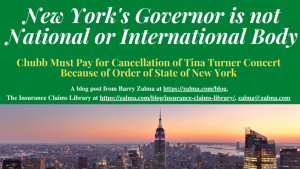 On appeal from an order of the Supreme Court, New York County (Andrew Borrok, J.), entered on or about December 30, 2021, denying defendant’s motion to dismiss the complaint, the New York Court of Appeals unanimously affirmed the decision of the district court.

New York’s appellate courts are known for their brief opinions, and this one is no exception.

The Court of Appeals concluded that the trial court, Supreme Court, New York County, correctly concluded that the plaintiff’s losses resulting from the cancellation of its Broadway show during the covid-19 pandemic were not covered by the policy’s communicable disease exclusion.

The exclusion excluded from coverage:

any loss directly or indirectly arising out of, contributed to or arising out of… any contagious disease or threat or fear of contagious disease… leading to: [1] the imposition of quarantine or restrictions on the movement of people or animals by any national or international agency or body; [2] any travel notice or warning issued by a national or international agency or body.

The Court of Appeals noted that the exclusion did not clearly and unequivocally exclude from coverage losses caused by communicable diseases that were of such a systemic nature that they led to quarantine or travel advisory decisions by a national or international agency or bodies. Rather, by giving the exclusion a strict and narrow construction and resolving any ambiguity against the defendant, the Court of Appeals found that it excluded losses from coverage resulting from quarantine or travel advisory orders issued by a national or international body or agency in response to a communicable disease.

Because the plaintiff’s losses arose from executive orders issued by the New York State Governor and the New York City Mayor prohibiting performances and assemblies in theaters, the exception did not apply.

Whenever there is a question as to whether a policy must provide coverage to an insured, it is necessary to read the entire policy. The New York Court of Appeals did just that: it read the exclusion relied on by Chubb to deny coverage to Ms. Turner, finding that her losses were due to executive orders issued by the Governor of New York State and the Mayor of New York City. Since the exclusion only excluded orders from one: “national or international agency or body” and since neither the governor nor the mayor was a national or international agency or agency, the exception did not apply.