The duty to defend is not unlimited 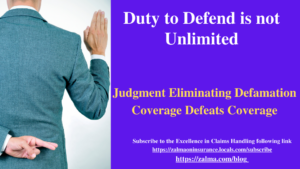 Although the duty to defend is extremely broad, the duty of an insurer to defend and the insured is not unlimited. IN University Of Louisville v. Kentucky School Boards Insurance Trust and Cyril William HelmNo. 2021-CA-1066-MR, Court of Appeals of Kentucky (August 19, 2022), University of Louisville (“University”) appealed the summary judgment in favor of Kentucky School Boards Insurance Trust (KSBIT) regarding KSBIT’s duty to file a defense and indemnification in a special suit for circuit court under an insurance.

KSBIT is a domestic insurance company created in 1978 to provide liability coverage to educational entities through a non-profit self-insured pool of funds. KSBIT issued general liability insurance to the university, which was renewed for several years. Section Coverage B of the policy addresses coverage for personal liability and advertising liability, and Section I(B)(1)(a) provides, in relevant part, that “[w]e [KSBIT] will pay the amounts that the member [the University] becomes legally liable to pay as damages due to “personal injury” or “publicity injury” to which this coverage section applies.” In the definition section of the policy, Section V(10) defines “personal injury” as: False arrest, detention or imprisonment; Willful prosecution; wrongful eviction from , trespassing into or trespassing on the right of private occupancy of a room, dwelling or premises held by a person by or on behalf of its owner, landlord or landlady; oral or written publication of material which defames or defames a person or organization or disparages a person’s or organization’s goods, products or services; verbal or written publication of material that violates a person’s right to privacy; or mental injury, mental anguish, shock, humiliation, defamation and damage to professional reputation.

The underlying case began with a lawsuit for a declaratory judgment by KSBIT, in January 2021 related to the policy. In this action, KSBIT sought a declaration that it had no obligation under the policy to defend or indemnify the University as a result of a Kentucky Whistleblower Act claim filed by Dr. Cyril Helm (Helm v. University of LouisvilleJefferson Circuit Court Case No. 15-CI-01410).

In the court case, Dr. Helm that he had suffered a personal injury, and KSBIT provided a defense to the university subject to reservation of rights. Dr. Helm pleaded for damages, including substantial loss of income, work experience and benefits; damage to his academic reputation; and emotional and physical stress. He sought damages and punitive damages as well as costs and attorneys’ fees.

The Jefferson Circuit Court ruled that Dr. Helm could not recover damages for mental anguish/pain and suffering, down payment or having to sell her house in a certain market. It also disliked Dr. Helm’s claim for damages. The only remaining claims were back wages and attorney’s fees.

Because Dr. Helm’s claim for back pay and attorney’s fees did not arise from a personal injury as defined in the policy, KSBIT argued that there was no longer any factual or legal basis under the policy requiring it to defend or indemnify the University in Dr. Helm’s underlying costume. Therefore, KSBIT sought a declaration that it had no obligation to further defend or indemnify the University for the claims made by Dr. Helm alleged in its underlying suit.

The district court issued an order granting summary judgment to KSBIT, rejecting the University’s arguments and holding that KSBIT was not required to provide a continuing defense to the University.

In its summary judgment, the circuit court rejected the university’s argument that the back pay and attorney fees arose out of, flowed from, or had a casual relationship with Dr. Helm’s requested damages. It agreed with KSBIT that Dr. Helm’s remaining alleged injuries did not arise from the policy’s definition of personal injury. The Court therefore held that under the policy’s definition of personal injury, KSBIT was not required to continue to provide a defense to the University against Dr. Helm’s claim.

The proper standard of analysis for insurance contracts in Kentucky is subjective. Terms of insurance contracts which have no technical meaning in law and which are to be interpreted in accordance with the usage of the common man and as they would be read and understood by him in the light of the prevailing rule that uncertainties and ambiguities must be resolved in favor of the insured.

In Kentucky, as in all jurisdictions, an insurer has a duty to defend if there is a claim that may fall within the coverage terms of the insurance policy, but this duty ends when the insurer determines that the liability is not actually covered by the policy. When the Jefferson Circuit Court ruled that Dr. Helm could not recover damages for mental anguish, pain and suffering, down payment or for having to sell his house in a certain market, he could only recover damages six months ago. salary and attorney’s fees.

The court agreed with KSBIT that its obligation to provide coverage ended when the Jefferson Circuit Court ruled that Dr. Helm’s damages were limited to back pay and attorney’s fees.

Attorney’s fees are not compensatory damages because an award does not compensate the plaintiff for any wrong committed by the defendant. Therefore, the circuit court did not err in law when it concluded that KSBIT was not required to continue to provide coverage based on the policy’s definition of personal injury.

Contrary to the university’s claims, the circuit court correctly concluded that an insurer has a duty to defend if there is a claim that may fall within the coverage terms of the insurance contract, but this duty ends when the insurer establishes that the liability exists in fact that is not covered by the policy.

The district court noted that KSBIT had filed a defense in Dr. Helm’s suit and won, which means there was no need to bring charges on behalf of the university. There was no continuing obligation on KSBIT to provide coverage to the University in Dr. Helm’s action.

This case has clearly established that the broad duty to defend is not an unlimited obligation. Before an insurer is obligated to defend an insured, an action must be brought for damages that the insurer agreed to defend and/or indemnify the insured. KSBIT successfully defended the university and obtained a favorable verdict eliminating all “personal injury” allegations, leaving only contractual damages for back pay. The win, on behalf of the university, eliminated any further obligation KSBIT had to make good and thus any obligation to defend the university. The university did not appreciate the profit and sought to obtain a defense to the remaining charges, for damages and claims not covered by liability insurance.