The duty to defend is exceptionally broad 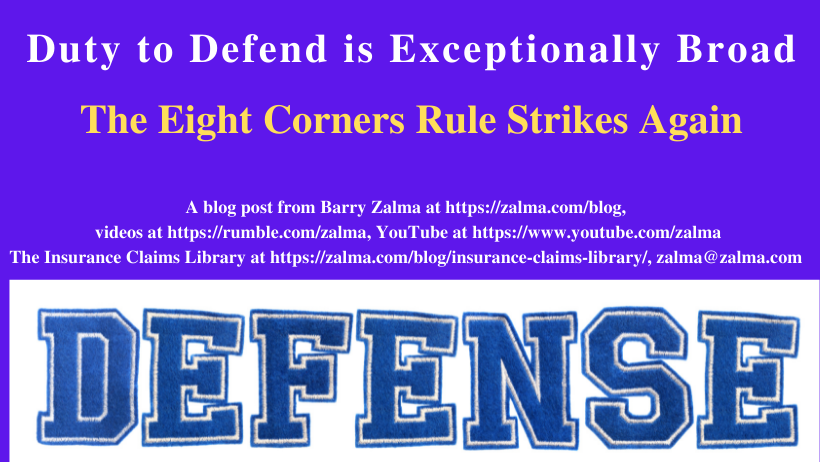 M/I Homes of Chicago, LLC (M/I Homes), appealed the circuit court’s motion for summary judgment in favor of Acuity, a mutual insurance company. The circuit court found that Acuity had no duty to defend M/I Homes in an underlying lawsuit arising out of damages caused by the allegedly defective construction work of one of M/I Homes’ subcontractors—because the complaint in that case did not allege “property damage caused by a event.

The Townhomes’ homeowner’s association sued for breach of contract and the implied warranty of habitability against M/I Homes as successor developer/seller of the Townhomes, and M/I Homes asked Acuity to defend it in the underlying lawsuit, which it further insured on a policy that Acuity had issued to one of its subcontractors, H&R Exteriors Inc. (H&R). Acuity denied that it had a duty to defend M/I Homes under the policy and filed the declaratory judgment action before the court.

Church Street Station Townhome Owners Association (the Association), by its board of directors, sued for breach of contract (Count I) and breach of the implied warranty of habitability (Count II). In the amended complaint, the association sued M/I Homes as successor developer/seller of the Townhomes, having succeeded to the entire remaining interest of the original developer/seller, Neumann Homes Inc. (Neumann).

The association alleged that Neumann and M/I Homes built and sold townhomes with significant exterior defects, including moisture-damaged or water-damaged fiberboard, water-damaged OSB sheathing, deteriorated brick veneer, poor condition of the weatherproof barrier, improperly installed J-channel and gussets, and premature deteriorated support members under the balcony deck boards. The association further argued that Neumann and M/I Homes did not perform the construction work themselves, but that all work on the Townhomes was performed on their behalf by subcontractors and the constructor.

The association argued that the property damage was an accident in that M/I Homes did not intend to cause design, material and construction defects in the Townhomes, and the resulting property damage. The association claimed damage to other building materials, such as windows and patio doors, including but not limited to water damage to the interior of units, and that the damage was neither expected nor intended from their point of view.

Acuity filed its complaint for declaratory judgment against M/I Homes and the association. The association is not a party to this appeal.

The parties have filed motions for summary judgment. M/I Homes argued in its cross-motion for partial summary judgment that Acuity owed it a duty to defend because the underlying complaint’s allegation of damage to “other property” was an allegation of damage beyond the mere repair and replacement of the construction work. Therefore, according to M/I Homes, “property damage” caused by an “occurrence” was sufficiently alleged.

The construction of an insurance policy and the determination of rights and obligations under it are questions of law for the court proper to dispose of by summary judgment.

The duty to defend is determined solely based on the allegations in the complaint. [ISMIE Mutual Insurance Co. v. Michaelis Jackson & Associates, LLC, 397 Ill.App.3d 964, 968 (2009) (citing Thornton v. Paul, 74 Ill.2d 132, 144 (1978), overruled in part on other grounds by American Family Mutual Insurance Co. v. Savickas, 193 Ill.2d 378, 387 (2000).] The duty to defend exists if the allegations in the underlying complaint fall within or potentially within a policy’s coverage provisions, even if the allegations are legally baseless, false or fraudulent.

In Illinois, the insurer’s duty to defend does not depend on a sufficient allegation of liability raised in the complaint; instead, the insurer has the burden of defending unless the allegations of the underlying complaint show that the plaintiff in the underlying lawsuit will not be able to prove the insured’s liability, under any theory supported by the complaint, without also proving facts showing that the injury falls outside the insurance’s coverage . [American Economy Insurance Co. v. Holabird & Root, 382 Ill.App.3d 1017, 1022 (2008).]

The policy, which is a fairly common commercial general liability (CGL) policy, raises the question of M/I Home’s potential for coverage, and Acuity’s duty to defend, which depends on whether the underlying complaint alleges “property damage” caused by an “event.” .”

M/I Homes contends that, based on the association’s allegations, the underlying complaint sufficiently alleged that property damage was caused by an incident. M/I Homes also argued that this damage to other property was alleged to have been caused by an “incident” because the underlying complaint alleged that the damage was an accident caused by the subcontractor’s defective work – which was neither anticipated nor intended by M/I Homes.

IN Travelers Insurance Co. v. Eljer Manufacturing, Inc., 197 Ill.2d 278, 308 (2001), the Supreme Court held that in determining whether there was CGL coverage, the predicate “property damage” is met only “when the property changes in appearance, shape, color, or in some other material dimension and does not occur upon occurrence of an economic loss, such as diminution in value.” Supreme Court in Electricity also cautioned against expanding CGL coverage to act as a “performance bond” for the insured’s contract work.

The underlying complaint in this case contains allegations that could support a duty to defend M/I Homes. It alleges that “the work of the subcontractors and the constructor caused damage to other parts of the Townhomes that were not the work of those subcontractors.”

The association – as a “community association’s board or board” according to the statutes must have the position and ability to act in a representative capacity in matters relating to the common areas or more than one unit, on behalf of the members. or shareholders as their interests may appear.

The threshold for finding a duty to defend is low and all doubts about such duty must be resolved in favor of the insured. Because the Association clearly has authority to act in a representative capacity in matters relating to the Common Areas, the claims of damage to “other property” may be a reference to the Association’s own property in the Common Areas, and there are no claims that would clearly exclude coverage.

Accordingly, these allegations are sufficient to potentially fall within the policy’s coverage requirement of “property damage” caused by an “occurrence” and thereby trigger a duty to defend.

It is almost impossible to refuse to defend an insured due to lack of standing or property damage to property not involved in the loss. In this case, the court found a duty to defend because there could be damage to the common property owned by the association. In the absence of clear and convincing evidence that there is no coverage for defense or indemnification, claims for defense should be settled with a reservation of rights including the right to recover money paid for defense.