Taking assignments against insurance is a loser 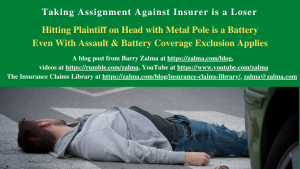 Paul Semien (“Semien”), appealed the district court’s dismissal of his breach of contract claim for defense and indemnification against Burlington Insurance Company (“Burlington”) after he was injured by a convenience store employee who struck him in the head with a metal pole. In Paul Semien v. The Burlington Insurance Company, No. 22-20195, United States Court of Appeals, Fifth Circuit (October 3, 2022), the Fifth Circuit applied the eight corners rule and resolved the dispute in favor of the insurer.

Semien, a customer at a convenience store became embroiled in a dispute with the store’s clerk, Tam Truong, regarding Semien’s right to store credit based on prizes he won from the store’s video poker machines. Truong left his post behind a glass counter and hit Semien in the head with a metal bar, causing Semien serious injuries. Semien sued T&T and Truong in Texas State Court (“the underlying lawsuit”) for negligence and tortious assault against both Truong and his employer.

T&T had a general commercial liability policy issued by Burlington (the “Policy.”) “Coverage D” of the policy provides coverage up to $100,000 for assault and battery. But Coverage D also excluded coverage when the assault or battery “is committed by any insured or agent of any insured.” The policy defines “insured” to include employees of T&T, but “only for acts within the scope of their employment by [T&T] or when performing tasks related to the conduct of [T&T’s] business.”

Burlington denied that it had a duty to defend or indemnify T&T and Truong in the underlying lawsuit. Semien subsequently entered into a settlement agreement with T&T and Truong. As part of the settlement agreement, they assigned to Semien “all rights they have jointly or severally to pursue claims and remedies under [their] insurance contract with The Burlington Company.”

Under Texas law, an insurer’s duty to defend arises when a third party sues the insured on allegations that, if taken as true, potentially state a cause of action within the terms of the policy. But if “the petition alleges only facts excluded by the policy, the insurer has no duty to defend. Texas courts follow the eight-corner rule. Under this rule, courts determine whether an insurer has a duty to defend its insured by looking at the facts alleged within the four corners of the most recent filing on which the insurer based its refusal to defend the action and the language within the four corners of the insurance company.relevant insurance.

Because the policy excludes coverage for assault or battery committed by an insured for acts within the scope of their employment and because Truong was working in connection with and scope of his employment with T&T Global Enterprises Inc. when he struck Semien and Semien, it is alleged that there was no coverage to defend or indemnify the insured.

A reading of the underlying pleading belies plaintiff’s contention that Truong was outside the scope of his employment at the time of the assault and therefore was not an “insured” or “agent of an insured” under the policy. This is true even when reading the plea liberally in favor of insurance coverage. Burlington had no duty to defend the insured in the underlying lawsuit.

Semien surrendered his claim against the people who injured him in favor of an attempt to get money from an insurer. If T&T or Truong had no assets, that was the only possible way to collect damages. However, since T&T owned a convenience store had some assets that Semien could have obtained with a judgment, the decision to leave them and sue the insurer who clearly owed nothing was a waste of time and effort. The eight corners awarded eliminated cover for T & T, Truong and Semien’s attempts to obtain damages.