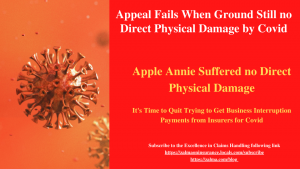 The Covid pandemic and subsequent lockdown has generated a host of legal questions. One of the most significant, in terms of the potential monetary liability, is whether companies ordered by state decree to close or suspend operations could be compensated under the business income coverage of the standard commercial comprehensive liability policy. The issue has generated opinions from various appellate courts, all of which have held that the issue is whether the insured can claim that it suffered “direct physical loss of or damage to [the insured] real property.” After losing in district court, the insured here told the court that “this appeal can be seen as a referendum on whether [those] decisions were made correctly.” They were right but not in the way they expected.

At all relevant times, plaintiff Apple Annie, LLC, operated restaurants in Marin, San Francisco, and Santa Barbara counties. Defendant Oregon Mutual Insurance Company issued to Apple Annie comprehensive commercial liability and property insurance that, when relevant here, generally promised to “pay for direct physical loss of or damage to the covered property of [insured] premises”, and in particular to “pay for the actual loss of business income you suffer due to the necessary interruption of your ‘businesses’ during the ‘restoration period’. The suspension must be caused by direct physical loss of or damage to property on the described premises. The loss or damage must be caused by or arise from a covered cause of loss.”

After an extensive examination of the subject, the court concluded that a business closed pursuant to a government shutdown order had not suffered “direct physical . . . damage to” the business’s property. This was a matter of plain English:

“The words in the phrase ‘direct physical injury’ have all their ordinary meanings. ‘Physical’ is defined as ‘having material existence: perceptible especially by the senses and subject to the laws of nature.’ [Citation.] ‘Direct’ is defined as ‘moving from one point to another in time or space without deviation or interruption’, ’emanating immediately from a source’ and ‘characterized by close logical, causal or consequential relationship.’

The presence of covid-19 on plaintiff’s property did not cause damage to the property, requiring rehabilitation or restoration efforts similar to those required to abate asbestos or remove toxic fumes permeating the property. Instead, all that is required is for the plaintiff to return to full working order [government orders and restrictions to be lifted.

This case . . . concerns an invisible virus that is present throughout the world. . . . It is that general presence, and not a specific physical harm to covered properties, that has caused governments at all levels to consider restrictions. The question, therefore, is one of ‘widespread economic loss due to restrictions on human activities, not the consequence of a direct physical loss or damage to the insured premises. (Inns-by-the-Sea)

Apple Annie contends that “because the phrase ‘physical loss of or damage to’ is phrased disjunctively, ‘loss of’ and ‘damage to’ must each be given a separate meaning.” Apple Annie reasoned: “Because of this disjunctive framing, each concept must be accorded a separate, distinct meaning. An interpretation of ‘loss of’ that assigns it the same meaning as ‘damage to’ would do violence to the language of the policy by rendering the former term surplusage.”

By contrast, the losses here arose from closures intended to limit the spread of a virus that can carry great risk to people but no risk at all to a physical structure.

The Court of Appeal decided to follow the reasoning of Inns-by-the-Sea and similar cases in acknowledging ‘the generally recognized principle in the context of first party property insurance that mere loss of use of physical property to generate business income, without any other physical impact on the property, does not give rise to coverage for direct physical loss.  As the United States District Court, Southern  District of California stated, that if, for example, a sick person walked into one of Plaintiffs’ restaurants and left behind COVID-19 particulates on a countertop, it would strain credulity to say that the countertop was damaged or physically altered as a result. The majority of cases in California (and elsewhere) are in accord.

Most recently, on July 13, Division Seven of the Second District filed its opinion in Marina Pacific Hotel & Suites, LLC v. Fireman’s Fund Ins. Co. (2022) 81 Cal.App.5th 96 (Marina Pacific). The Court of Appeal went on to hold for the plaintiff insured, on the basis it had pled the element missing from the three earlier cases: it “adequately alleged direct physical loss or damage.” Thus, the court held, Marina Pacific stated a claim for breach of the insurance policy (Marina Pacific, supra, at p. 108), and concluded: “Because the insureds adequately alleged losses covered by Fireman’s Fund’s policy, they are entitled to an opportunity to present their case, at trial or in opposition to a motion for summary judgment. The judgment of dismissal based on the trial court’s disbelief of those allegations, whether ultimately reasonable or not, must be reversed.”

In sum, and in light of the foregoing, we cannot agree with Apple Annie’s primary contention that the policy language-“direct physical loss or damage to,” including its disjunctive phrasing-is ambiguous and “subject to a reasonable construction that supports coverage.” Doing so, the Court of Appeal rejected what may be the two most consequential aspects of Apple Annie’s position:

Apple Annie makes a new argument using a definition in the liability section of the policy. A similar argument was made and rejected in United Talent Agencywhich observed that cases involving comprehensive liability coverage are of limited utility in determining the extent of property insurance coverage.

While Marina Pacific held for the insured, based on its filing, in its supplemental brief Apple Annie acknowledges that the case does not directly implicate Apple Annie’s theory of coverage.

At oral argument, the Court of Appeal asked counsel for Apple Annie – competent counsel with significant experience in insurance coverage issues – what Apple Annie would or could claim. Given that, the fact that this case has been ongoing for 25 months, and the additional fact that Marina Pacific has been in place for over a month, the court concluded that Apple Annie has not met the burden of obtaining leave to amend, and we therefore deny the late motion.

Like I said when I melted Marina Pacific case, the decision was limited to whether the plaintiffs had pleaded a cause of action and, since they alleged direct physical injury, they were entitled to try to prove it. Because this case was not brought on the basis of a debtor’s finding, the lack of direct physical injury negated the business interruption claim like all other cases across the country.