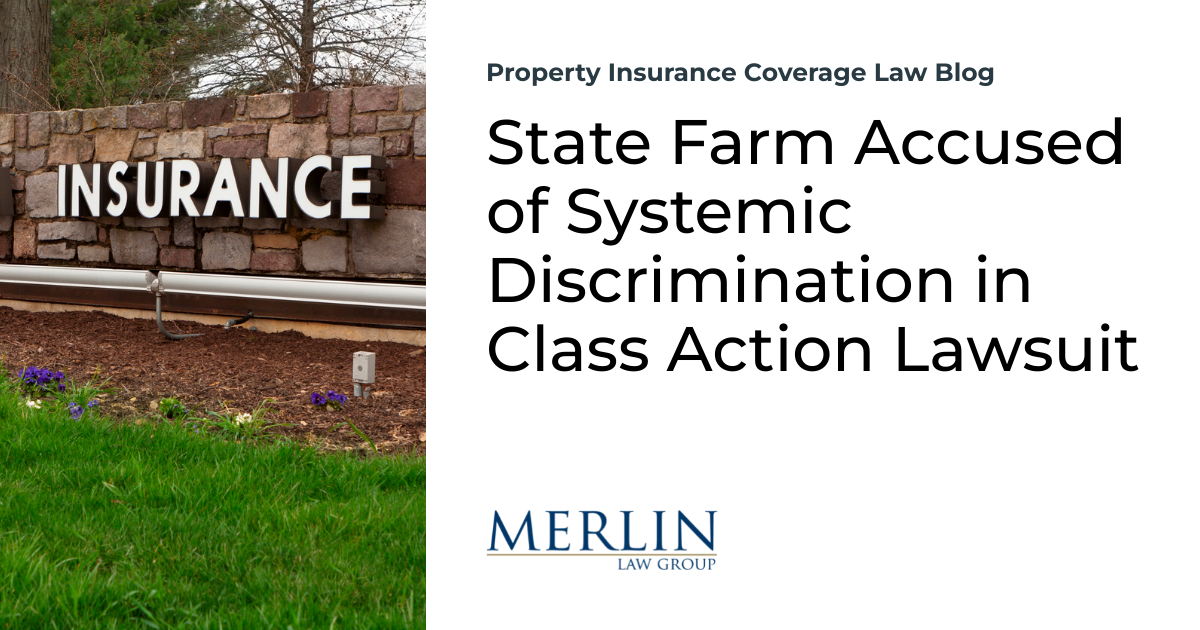 I have worked on a number of active State Farm lawsuits involving its claims practices. My research came across a recently filed class action lawsuit in December alleging systemic racial discrimination in its claims processing.1 The press release for the trial stated the following:

State Farm’s homeowner’s insurance claims process discriminates against black policyholders and causes them to incur far greater burdens to get their claims processed and paid in violation of the Fair Housing Act, according to a class action lawsuit filed today in Illinois. Applying what is believed to be the first-ever independent, company-specific statistical analysis of racial disparities in State Farm claims, the suit alleges that the discriminatory effect is driven by a series of policies in place at State Farm that make black homeowners subject to more scrutiny. , delays and paperwork, among other administrative burdens.

“The data behind this lawsuit indicates that black homeowners are subject to a fundamentally different and worse claims process at State Farm. State Farm should be a ̵

6;good neighbor’ to all of its policyholders, regardless of their race,” said Aisha Rich of Fairmark Partners, LLP, a of the law firms leading the case.

The complaint alleges that State Farm relies on internal and external automated fraud detection and claims processing tools that use biased historical data and reams of suspiciously personal consumer data to assign higher risk scores to black policyholders, resulting in additional scrutiny and delays in their claims. The complaint details specific State Farm providers, technologies and practices that likely contribute to their discriminatory treatment of black policyholders.

A reminder to everyone that allegations in a lawsuit must have evidence for the lawsuit to be successful. This lawsuit alleged in part:

15. In the insurance industry, as elsewhere in our society, racial discrimination has shifted from overt to covert. Although race-based redlining is now illegal, discrimination has persisted through practices such as using credit-based insurance scores and discriminatory insurance policies that use age and home value as a proxy for race. Unequal practices like these make it harder for black homeowners to build wealth through home ownership at the same rate as white homeowners.

16. Today, discrimination is perpetuated by the modern trend towards automation and data mining. Institutions such as insurance companies use algorithmic models to rapidly analyze large amounts of publicly available information (‘data mining’) to discover patterns and help make future decisions (‘data analytics’). So-called “machine learning” algorithms are explicitly designed to learn based on the algorithm’s access to a specified data set or an algorithm-driven search for data found on the Internet or in a limited database.

Where did the class get evidence that the alleged procedures result in racial discrimination? It seems they did it with data from claims surveys:

20. In 2021, YouGov—a reputable online polling provider that uses industry practices and an internal quality assurance process—surveyed approximately 800 white or black homeowners with State Farm homeowners insurance policies in the Midwest to assess whether there were racial disparities in State Farm’s application and assessment process home owner’s insurance requirements. Among other data points, the survey collected data on the location of the homeowners; how long their claims process took; if they were asked to submit additional paperwork after making a claim; the number of interactions with a claims adjuster required to resolve the claim; and the final outcome of their application.

How about doing this systematically? The complaint alleges:

27. The claims handling aspect of the insurance industry is notoriously opaque, with little oversight or regulation aimed at increasing transparency for both consumers and regulators. Insurance companies such as State Farm do not typically publish their claims processing guidelines, their claims processing algorithms, their claims outcomes, or other related data. What the industry readily confirms, however, are the basics of the traditional home insurance process: A homeowner who has suffered a loss files a claim; the insurance company appoints an adjuster to assess the damage and apply the wording of the homeowner’s policy to the adjuster’s interpretation of the facts. The adjuster can choose to request more information, go to the scene, request other evaluations, or meet with witnesses.

28. But State Farm and other insurers are increasingly automating claims management, or important aspects of it, replacing human judgment with algorithms. A significant number of cases are now handled without a conversation with the home owner or a follow-up investigation. Instead, State Farm relies on data analytics and machine learning algorithms to process the claims it receives. These tools are designed to, among other things, predict the likelihood of fraud and sort “no touch” or “low touch” claims (which are paid immediately or almost immediately) from “high touch” claims (which trigger further review) .

29. State Farm does its best to keep the nature of its claims processing practices confidential, arguing that public disclosure of details would undermine efforts to combat fraud. But the disclosures that have been made — by State Farm and its third-party vendors — reveal that State Farm utilizes a variety of tools to collect extensive data about policyholders and to use that data in claims processing and fraud detection. It describes itself as being at the forefront of analytics, and it actively recruits and hires employees with a background in data analytics, to ‘turn data into actionable insights by leveraging a combination of natural language processing, machine learning, artificial intelligence or other data science tools and concepts.’

What does the complaint allege about how State Farm does this?

32. In terms of information and belief, State Farm uses a combination of internal and third-party tools to take advantage of the vast amount of data it collects to process homeowner’s insurance claims. Data about policyholders and their claims is primarily stored, managed and accessed through State Farm’s Enterprise Claim System (‘ECS’), a proprietary web-based system used by State Farm’s claims reporting partners. ECS acts as an electronic file where information about a claim can be found and updated in real time. In addition to providing a web-based interface for entering and storing claim data, State Farm runs automated processes based on code and data relationships. As an example, State Farm has disclosed that it is licensing a third-party vendor’s proprietary system, Technology Analytics for Claims (‘TAC’), which uses text-based queries on claims data from ECS to help detect and identify potentially fraudulent claims.

35. According to its website, Duck Creek offers a “comprehensive claims management solution that helps insurers manage the entire claims cycle – from initial notification of loss to settlement – in a single, integrated solution,” called Duck Creek Claims. Duck Creek Claims provides “end-to-end claims workflows that enable the management of claims processing from high touch to no touch.” The system consists of “dynamically controlled workflows, rule-driven automation, personalized user interfaces and data enrichment to automate processes where needed.” In practice, this means that upon receipt of a claim, the system uses predictive modeling or rule-based decision making to determine how a claim should be processed and then structures the claim workflow accordingly. The system’s view of appropriate workflow is influenced by claim type, but also by processing rules (for examplerules that determine whether a claim is high touch, low touch or no touch) and through predictive fraud modelling.

38. As explained in an industry presentation at FRISS: “Much as banks rely on credit scores to assess the risk of lending to an individual, insurance companies . . . rely on the FRISS score to assess the likelihood of fraudulent activity in claims. ‘ A claim with a lower FRISS score is judged to be less risky than a claim with a higher risk score, a score of 50 or lower, for example, indicates that FRISS has little or no concern about the claim, and can be quickly reviewed by claims adjusters or quickly tracked to payment .A score slightly above 50 may indicate that there are some discrepancies with the claim, and that a claims adjuster should spend some extra time reviewing these claims and perhaps forward them to a supervisor for a decision before payment can be made. A high FRISS score indicates that fraud is likely and the claim should be referred to triage or specific claims adjusters for analysis.

39. According to Duck Creek and FRISS, “[a] The FRISS score is generated at each step of the claims process: [first notification of loss], claim contact added, loss information added/changed, prior to issuing payment – ​​as well as at any time upon request.’ The software can then automatically generate data for the claims adjuster based on a claim’s FRISS score. As explained in the same industry presentation discussed above, the system is designed so that “honest customers receive lightning-fast responses, while questionable claims are managed through further processing with actionable insights and automated workflows” in the insurer’s claims management system.

I will monitor this case. I imagine State Farm will strongly oppose the allegations in this case and try to stifle discovery of its claims practices. However, these secret claims settlement practices are important to understand and probably exist in other insurance companies that tend to share claims practices through vendors and consultants.

Three can keep a secret, if two of them are dead.