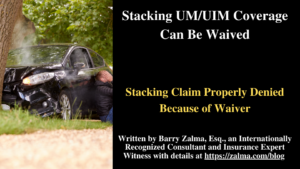 Tina Bubonovich was involved in a two-car accident. After regaining the available limits for the other driver’s liability protection and her own underinsured motorist (UIM) coverage, she filed a claim and requested the proceeds from her resident son’s UIM coverage. When that claim was denied, she sued State Farm Mutual Automobile Insurance Company (State Farm Auto), State Farm Fire and Casualty Company (State Farm Fire) and State Farm, claiming she had the right to “stack” her son’s UIM coverage on top of her own recovery.

The plaintiff lives with his son, Nicholas Bubonovich. Nicholas is the named insured on his own State Farm Auto insurance. That policy does not list Plaintiff’s Scion as an insured vehicle and has a limit of $ 100,000 for UIM coverage. However, Nicholas implemented a UIM stacking rejection of his policy.

The plaintiff made a UIM claim under Nicholas ‘coverage, but State Farm Auto denied the claim based on Nicholas’ waiver of his right to “stack” coverage. Such coverage, State Farm Auto claimed, was otherwise unavailable due to the exclusion of the household.

Since the plaintiff has already restored the applicable limit for UIM coverage under her insurance, the question is whether she can “stack” her son’s UIM policy on top of her own recovery.

The district court found that Pennsylvania’s Supreme Court answered this question Craley v. State Farm Fire & Casualty Company, 895 A.2d 530 (Pa. 2006). IN Craley, Jayneann Craley was driving with her infant son, Keith Craley, and her mother-in-law, Gloria Craley, when their car was hit by a drunk driver. Jayneann was killed; Keith and Gloria were injured.

Gloria, as well as Jayneann’s husband, Randall Craley, as trustee of Jayneann’s estate and on behalf of Keith, both applied for and received coverage for uninsured motorists (UM) from Jayneann’s car insurance – the insurance that covered Jayneann’s car and which she was named insured. The insurer paid the limits for that insurance. Randall and Gloria then applied for UM coverage under Randall’s separate one-car policy. Nevertheless, Randall had issued a waiver of inter-policy stacking coverage before the accident. The Supreme Court of Pennsylvania concluded that because the parties tried to collect under Randall’s policy, “[i]It is Randall’s policy and its exceptions that are relevant to the legal issues presented in this case. ” The Supreme Court held that stacking insurance could be validly waived in car insurance, and that since Randall had waived the possibility of “stacking” his insurance, the plaintiffs could not recover under his insurance.

Here the plaintiff tries to recover according to Nicholas’ policy. The third party therefore looked at the terms of his policy to determine whether the Plaintiff may “stack” its coverage on top of her own. That attempt failed. The district court rightly held that State Farm Auto was entitled to a summary judgment.

The reasoning of the Supreme Court of Pennsylvania was clear. This and the third circle could only look at the policy under which the applicant is trying to recover to determine if coverage is available. Whether the plaintiff waived coverage is therefore not relevant.

The plaintiff’s two remaining arguments do not work out better.

First, she claims that she paid for stacking on her policy, so if stacking is not allowed here, she paid an extra premium and received no benefit. Still, she could have amassed her own benefits if she had been injured while driving her son’s car.

Second, the plaintiff then argued that if the third circuit respects the stacking waiver in Nicholas ‘policy, it will in effect invalidate Nicholas’ entire UIM coverage. But Nicholas could benefit from his own UIM coverage if he were injured by an underinsured driver. As such, the plaintiff or her son does not deprive the “benefit of the purchase” of denying stacking here: they both receive the insurance cover they have paid for.

Finally, because it is obvious that this case is governed by Craleythe third district denied the plaintiff’s invitation to file a question to the Pennsylvania Supreme Court.