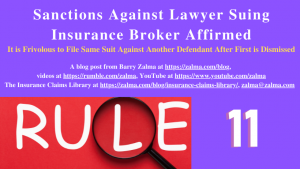 Dimitri Enterprises, Inc. (“Dimitri”) and its attorney, Richard J. Flanagan, appealed the district court’s June 24, 2021 order imposing $24,675.00 in sanctions pursuant to Federal Rule of Civil Procedure 11. Dimitri, a roofing contractor, filed this lawsuit in connection with a dispute regarding insurance coverage for an employee’s injuries on a construction project.

The district court granted NIF’s motion to dismiss both claims against NIF on the grounds that the negligence claim was time-barred, and the breach of contract claim was insufficiently pleaded because Dimitri did not allege any terms of the contract that NIF breached. Dimitri then filed a Second Amended Complaint (“SAC”) against an additional defendant, Spar Insurance Agency, LLC (“Spar”), which was the retail insurance broker for Dimitri’s policy.

In addition, the district court granted Spar’s subsequent request for sanctions and explained that “the plaintiff’s counsel knew or should have known that the claims against Spar were likewise subject to dismissal” because “identical claims against NIF had previously been dismissed as either time-barred or insufficiently pleaded.”

The Second Circuit reviewed the district court’s imposition of sanctions pursuant to Rule 11 of the Federal Rules of Civil Procedure for abuse of discretion. This deference standard is applicable to the review of Rule 11 sanctions because the district court is familiar with the issues and the dispute and thus is better placed than the appellate court to gather the relevant facts and apply a fact-dependent legal standard. An abuse of discretion only occurs if the district court based its judgment on an incorrect legal opinion or on an obviously incorrect assessment of evidence or issued a decision that cannot be located within the framework of permissible decisions.

Rule 11 expressly and unequivocally imposes an affirmative duty on every attorney to conduct a reasonable inquiry into the tenability of a pleading before signing it. The standard for triggering the award of fees under Rule 11 is objective unreasonableness and is not based on the subjective beliefs of the person making the statement.

Regarding the statute of limitations for the negligence claim, Dimitri specifically contends that “the suggestion of a later date for the accrual of a negligence claim was not frivolous, rather it was responsible and zealous.” Regardless, the Second Circuit concluded that it could discern no abuse of discretion in the district court’s decision to impose sanctions.

Under Rule 11, a litigant’s obligations with respect to the substance of the pleadings are measured not only from the time they are filed with or filed with the court, but include reconfirming to the court and advocating positions in those pleadings and motions after learning that they cease to have any merit. The Second Circuit has upheld sanctions where an attorney or advocate may have initially filed a frivolous claim but, after the district court rejected that claim, refiled a similar or identical claim in an amended pleading without any good faith basis to overcome the district court’s previous decision.

Finding that the district court did not abuse its discretion, the Second Circuit concluded that sanctions against Dimitri’s counsel because Dimitri brought the exact same negligence and breach of contract claims against Spar that had already been dismissed against NIF. Although the claims were brought against a different party, the special grounds for rejecting the claims against NIF (the wholesale broker) applied with equal force to assert the same claims against Spar (the retail broker).

With regard to the negligence claim, the district court had ruled that the claim against NIF was time-barred because the claim was filed at the latest when Dimitri was notified that the coverage was denied. In the wake of that decision, Dimitri made no argument as to how a different vesting date could apply to its identical claim subsequently brought against Spar, which involved the exact same denial of coverage. At a hearing on the sanction motion, Dimitri’s counsel admitted to the district court that the negligence claim against Spar was time-barred.

Plaintiff’s counsel filed the same deficient claim against a new defendant. Therefore, the Second Circuit concluded that such claims were not made in good faith.

It was “obvious” from that reasoning that an amendment to the pleading to make the same claim against Spar had no chance of success.

Some people and their lawyers think that suing an insurance company or insurance agent/broker is always a slam-dunk, can’t-lose process. In this case, the client and his attorney were surprised by an apparent dismissal because the lawsuit was time-barred and only filed the same action against another defendant that they knew was also time-barred. The case was dismissed and the lawyer was sanctioned under Rule 11 for filing a frivolous process.