Renewal is a new contract 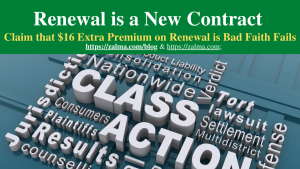 Peter Gottlieb claimed that the price he agreed to pay Amica Mutual Insurance Company to insure his home was $16 too high because it was based on an excessive coverage limit. He also claimed that other Amica policyholders were paying too much to insure their homes and filed a putative class action. After the district court dismissed Gottlieb’s complaint for failure to state a claim and entered judgment, he appealed.

IN Peter Gottlieb, individually and on behalf of all persons similarly situated against Amica Mutual Insurance Company, No. 22-1074, United States Court of Appeals, First Circuit (December 30, 2022) decided the class action.

Gottlieb owns a home in Burlington, Massachusetts. In 2015, he purchased Amica home insurance that covered him from March 10, 2015 through March 10, 2016. The coverage limit to replace his house in the event of a loss was $311,000, for which Gottlieb paid a $730 premium. The policy also contained an endorsement providing additional coverage of up to 130% of the coverage limit if Gottlieb agreed to certain conditions, including that Amica could adjust the coverage limit and premium “in accordance with” “property evaluations [Amica] do[s]” and “[a]new increases in inflation.” The policy contained no other language allowing Amica to increase coverage limits.

No loss occurred during the one-year policy period. The suggested premium for the renewal policy was $795 ($65 more than the premium for the original policy). Sixteen dollars of the increase was due to a higher coverage limit for Gottlieb’s house ($321,000 vs. $311,000). Amica arrived at that coverage limit based on a multiplier calculated by a company called E2Value, Inc., which calculated costs for Gottlieb’s ZIP code based on various data sources. The remainder of the increase was irrelevant to color.

Gottlieb sued Amica, claiming that the increased coverage limit for his house and premium in 2016-17 violated the terms of his contract with Amica. Gottlieb argued that the endorsement in his original policy limited how Amica could set the coverage limit in the renewal policy. Gottlieb also argued that while Amica did not expressly violate the policy, it did violate the implied covenant of good faith and fair dealing.

The district court found that the policies for 2015-16 and 2016-17 were two separate contracts, so setting the original coverage limit in the latter could not have breached the former. In addition, the original agreement contained no restrictions on how the new coverage limit in the renewal agreement could be determined. No covenant of good faith and fair dealing extended or created an independent obligation to use in due course the rules of the first policy to select the starting point for the renewal policy.

Gottlieb’s breach of contract claim begins with the original policy’s limitation on Amica’s unilateral ability to change the $311,000 coverage limit and corresponding premium agreed to by the parties when they entered into the contract. Had Gottlieb sought coverage from another insurer when the policy expired, it is clear that no offense could have been alleged.

The parties did not go their separate ways. Instead, they included a new policy – ​​the renewal policy. In doing so, they agreed to a new, slightly higher coverage limit of $321,000 (compared to $311,000 the previous year) and a corresponding premium of $795. During the term of the renewal policy, Amica never attempted to charge Gottlieb more than the agreed-upon $795.

Because the original policy did not limit Amica’s freedom to propose a coverage limit for the renewal policy, Gottlieb’s breach of contract claim fails.

Gottlieb’s claim for breach of the implied covenant of good faith and fair dealing fares no better. The implied covenant is not a catch-all for changing the terms or scope of a contract. However, the agreement may not be invoked to create rights and obligations not otherwise provided for in the existing contractual relationship, as the purpose of the agreement is to ensure that the parties remain true to the intended and agreed expectations of the parties in their performance. .

Amica’s changes to the residential limit during the term of the original policy did not apply to the determination of the original coverage limit in the renewal policy. The covenant of good faith and fair dealing does not ensure this benefit that the agreement never guaranteed in the first place. Nor did Amica do anything to deprive Gottlieb of the reasonably expected benefits of the policy.

The policy clearly governs the relationship between the parties and the subject matter of the dispute (Gottlieb’s premium), so Gottlieb’s equitable claims are precluded here.

In sum, the court could not conclude that Amica fraudulently sold Gottlieb coverage that he could never use. He has thus not shown that he was harmed by Amica.

Class-action lawsuits become viable when there are enough victims—thousands—who can claim to have lost a small sum. Gottlieb tried, by claiming a $16 claim, was worth millions because Amica has thousands of customers. The problem, however, was that a renewal policy is actually a new and separate contract from the original policy. Because Gottlieb agreed to accept the new policy with new limits at the new premium set by Amica, he got what he paid for, no more, no less. The case was a waste of money for Amica’s counsel, a waste of the court’s time because there was simply no claim and no loss, and a waste of Mr. Gottlieb and his counsel’s time.