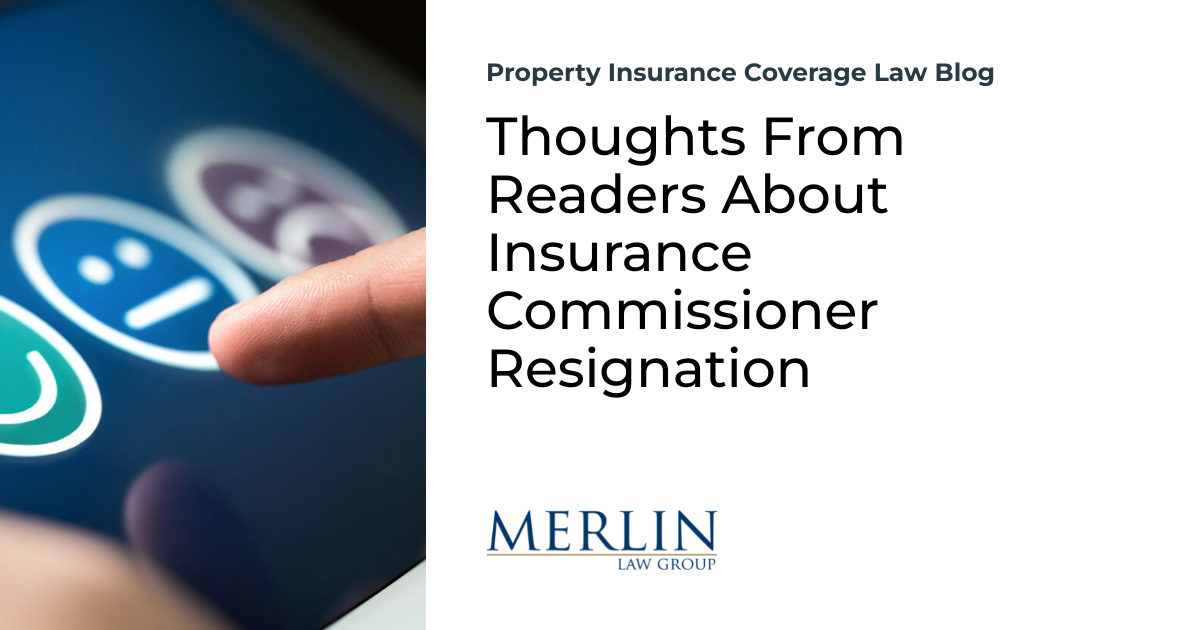 the pole, Ding Dong the evil insurance witch is dead! Florida Insurance Commissioner Resigns!, generated quite a few comments from readers. The Wizard of Oz is my favorite movie, and there are many lessons in the story. However, some missed the point of the post, which is in the last paragraph:

All I and policyholders can do is celebrate his departure. Most of us have felt like munchkins in a faraway land and ignored ever since Altmaier was appointed Florida’s insurance commissioner.

Some readers suggested that Altmaier be charged with something or “locked up” and that Florida politicians be bribed. Not so, and in response I noted:

He is a bright man. I just don̵

7;t think he was right for this job.

I am very pleased that he has tendered his resignation because policyholders deserve better.

… I do not suspect the governor or any Florida politician of being bribed and have no evidence of it. I’ve actually heard Governor DeSantis warn people not to contribute large sums because it won’t matter.

We need great leaders who work hard and with courage. We deserve leaders who can tackle tough issues fairly and with great wisdom if we demand it from those in charge of appointments. We don’t need insurance industry shills in this position.

This post was meant to show my joy when I heard that the head of the Office of Insurance Regulation had resigned. My view is that his performance was disastrous for the insurance public.

Many people commented properly about the increase in premiums and not being able to find insurance companies that would provide coverage. I wrote a number of responses, most of which point this out:

My prediction is that this legislation is so favorable to new insurance companies, they will come back because it will be a profitable breeding frenzy.

The prices will be high and you may not get your insurance compensation paid, but you can find another company to buy your insurance.

Some correctly commented on the increase in litigation and AOB. I gave many answers to this, and one in particular I would like to share:

Insurance is a social product. If losses occur in one part of the state, it can affect total losses in another part of the state. In fact, national property losses affect our reinsurance rates.

So if there is gamesmanship going on regarding AOB claim litigation, it affects us all. I think that’s a point we all need to address no matter what side of the aisle you’re on.

This AOB problem does not excuse the horrendous underpayment of claims, the raiding of surpluses by insurance executives, the feigned statistics that lead to bad laws, or the disregard for policyholders that our soon-to-be insurance commissioner allowed on his watch.

Insurance commissioners are very important government positions because we rely heavily on the product in our private and business lives. Historically, insurance companies want:

My understanding has been that our soon-to-be-former insurance commissioner was working for the insurance company executives rather than policyholders on these matters. I don’t know the reasons or the motive why he did it. Many speculate that his resignation is motivated to avoid anti-lobbying laws coming into place on January 1, so that he and others on his staff can be retained by the insurance industry. Time will tell.

We must support the appointment of a new insurance leader who will have the intelligence to fix problems as they arise, the courage to regulate and the leadership to build consensus. I am confident that we can do much better, although Florida will always have problems with property insurance in the future, given the geography and significant population growth.

A baby has brains, but it doesn’t know much. Experience is the only thing that gives knowledge, and the longer you are on earth the more experience you are sure to gain.
– The Wonderful Wizard of Oz