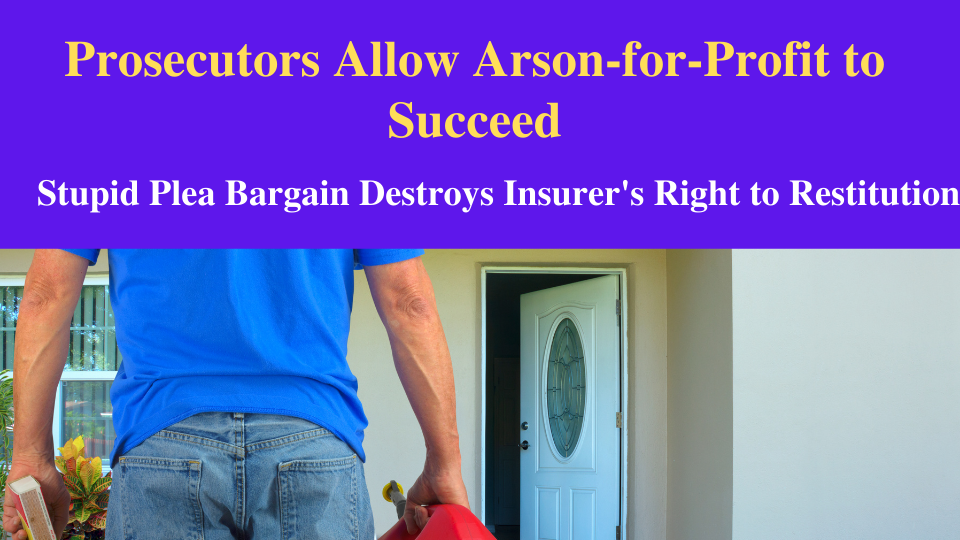 Deliberately burning down a home and making an insurance claim at the same time is arson for profit and two serious crimes. However in The People v. Damon Lawrence George, C095325, California Court of Appeals, Third District, Placer (September 12, 2022) Damon Lawrence George was allowed by the prosecution to plead guilty only to the unlawful burning of his house. The People, not understanding the consequences for an insurer, allowed the insurance fraud to succeed by dismissing several related charges against the defendant, including insurance fraud, without obtaining a People vs. Harvey (1

The trial court ordered $122,377.91 in damages to defendant’s insurer and as a condition of probation. The defendant appealed, arguing: (1) his insurer did not suffer financial loss as a result of his criminal conviction; and (2) the restitution imposed as a condition of probation serves no rehabilitative purpose and must be reversed. Of course, Farmer suffered damages due to arson for profit and the fraudulent insurance claim, but the prosecution dismissed those charges.

In a written judgment issued after the hearing, the court ordered the defendant to pay restitution to the farmers and as a condition of probation. It further concluded that the payments made by Farmers to defendant and the fire investigation expenses incurred by Farmers constituted economic losses directly caused by defendant’s criminal activity within the meaning of the California Constitution. The amount of compensation was $122,377.91, consisting of $81,297.66 for alternative living expenses paid to the defendant by farmers and $41,080.25 for fire investigation services.

Defendant argues: (1) Farmer did not suffer economic loss as a result of his conviction and is therefore not entitled to damages; and (2) the restitution as a protective order serves no rehabilitative purpose and must be remedied.

Although a court has a constitutionally mandated duty to order restitution to a victim who “suffered economic loss as a result of the defendant’s conduct. A business entity is a “victim” under section 1202.4 when the entity is “a direct victim of a crime.”

Generally, “an insurer d[oes] not become a “direct victim” of crime. . . by paying its insured’s crime-related losses under the terms of a policy.” An insurance company does not become the victim of a crime simply because it “accepted its liability.” An insurer may still be required to provide coverage for reckless crimes committed by its policyholders. Insurance companies have right to reimbursement if subject to insurance fraud The elements generally necessary to find an insurance fraud violation are the defendant’s knowing presentation of a false statement, with intent to defraud.

Unlike insurance fraud, the illegal burning of a house does not require willful conduct, only recklessness. A violator of section 452 must not intend to cause property to be burned.

The defendant’s crime of conviction was illegal burning, not insurance fraud. The defendant admitted only parts of section 452, which do not include the intention to cause the burning of his house. Also absent was evidence of defendant’s intent to defraud farmers as the People dismissed the insurance fraud count.

While the People cited facts established at the preliminary hearing regarding the insurance fraud claim, the trial court cannot order defendant to pay damages for crimes of which he was not convicted.

IN Harveythe California Supreme Court found “it would be improper and inequitable to permit the sentencing court to consider any of the factual circumstances behind” a charge dismissed pursuant to a plea bargain “for the purpose of aggravating or enhancing the defendant’s sentence.”

The defendant’s admitted illegal burning has not resulted in any damage for which damages can be ordered. The farmers’ claim for reimbursement rests entirely on the dismissed insurance fraud claim, not the reckless burning.

Restitution as a condition of probation

A trial court is prohibited from imposing a condition of probation based on the facts underlying a dismissed charge without Harvey waiver unless those facts are “transactionally related to” the pleaded offense. Since the defendant only admitted parts of the illegal burning, which does not include any intention to burn his house, and even less the intention to deceive farmers to burn and file the claim, were, at most, temporally related. And however anomalous the result may be in this case, the defendant is entitled to compensation from Farmers for his reckless conduct, because accidentally setting fire to a house is an insured against peril.

By basing the condition of probation on the facts underlying the dismissed insurance fraud claim by concluding that Farmers suffered financial losses “directly caused by the defendant’s criminal activity,” the district court violated Harvey rule.

The refund decision was changed. The sentence was modified by striking $122,377.91 in direct victim compensation awarded to Farmers and as a condition of probation. As amended, the judgment was affirmed.

Much to the surprise of laymen—including the prosecutors in this case—arson is not an out-of-the-box danger. Arson is covered. Setting fire to your house without intention and without intent to defraud, are insured against perils. By not getting one Harvey recanting and accepting the illegal arson conviction and dismissing the insurance fraud and arson prosecutors allowed the defendant to get away with his fraud and only serve a few days in jail and pay a small fine. Farmers can, of course, sue Mr. George for fraud in civil court and may find it impossible to collect a judgment while restitution as a condition of probation would encourage George to pay rather than spend years in prison. Prosecutors shirked their duty to protect the true victim of the crime, Farmers.

Barry Zalma, Esq., CFE, now limits his practice to serving as an insurance consultant specializing in insurance coverage, insurance claims management, insurance bad faith and insurance fraud almost equally for insurers and policyholders. He practiced law in California for more than 44 years as an insurance coverage and claims attorney and more than 54 years in the insurance industry. He can be reached at http://www.zalma.com and zalma@zalma.com. Subscribe and receive videos limited to Excellence in Claims Handling subscribers at locals.com https://zalmaoninsurance.locals.com/subscribe.Subscribe to Excellence in Claims Handling at https://barryzalma.substack.com/welcome. Now available Barry Zalma’s latest book, Bad faith damages, available here. The new book is available as a Kindle book, paperback or as a hardcover.