Pointing a gun at a person is not an accident 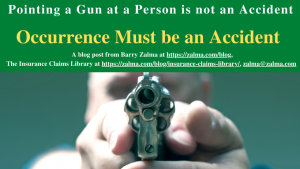 IN Meemic Insurance Company v. Randal S. Ritchie and Beverly Weathersbyno. 358929, Court of Appeals of Michigan (Oct. 20, 2022), the Court of Appeals was asked to resolve the issue of coverage for an alleged abuse under a homeowner’s policy.

The case arose out of an unfortunate encounter between two strangers, whose accounts of the incident differ greatly. As Weathersby tells it, while making a home visit in rural Coldwater as part of her job as a social worker, she got lost and her GPS mistakenly sent her to Ritchie’s house. She pulled her car into Ritchie’s driveway and approached the home. Then, according to Weathersby, Ritchie came out of his house, approached her and aggressively confronted her while pointing a gun directly at her at close range. He questioned her as to why she was on his property and told her to leave. Fearing for his life, Weathersby returned to his car and drove away. He testified in his deposition that he approached Weathersby cautiously, helped her find the correct address, and held his gun to the side, pointing at the ground at all times with his finger off the trigger. He explained that there was no confrontation at all.

Weathersby filed a civil suit against Ritchie, claiming that Ritchie committed the intentional assault. She also argued that Ritchie was negligent in an apparent attempt to dip into Ritchie’s insurance as it is always intentional.

She sought damages for the emotional distress and harm she suffered as a result of Ritchie’s conduct. At the time of the incident, Ritchie was insured under a homeowner’s policy issued by Meemic. The trial court denied coverage, ruling that Ritchie’s act was not an “occurrence.”

The interpretation of an insurance contract is a question of law that is reviewed de novo. An insurance policy is an agreement between parties that a court interprets in much the same way as any other agreement to best give effect to the intent of the parties and the clear, unambiguous language of the insurance policy. The terms of an agreement must be enforced as written where there is no ambiguity.

COVERAGE FOR AN “INCIDENT”

The main issue on appeal was whether Ritchie’s alleged actions constituted an “occurrence” under Meemic’s policy, which would trigger a duty to indemnify and defend Ritchie. To analyze the issue, the Court of Appeals needed to turn to the language of the policy.

Meemic was required to provide coverage and defend against Weathersby’s suit only if an “event” occurred. The Meemic Policy defines an “occurrence” as “an accident, including continuous or repeated exposure to substantially the same general harmful conditions, resulting in bodily harm, personal injuryor property damage during the policy period.” Therefore, the relevant question is whether Ritchie’s act of pointing a gun at Weathersby and aggressively confronting her could constitute an “accident” that would fall within the definition of an “occurrence.

Michigan courts have adopted the ordinary meaning of “accident” as an undesigned event, an accident, an occurrence of chance, something out of the ordinary course, unusual, fortuitous, not foreseen and not naturally to be expected.

The document contained no evidence from which a court could conclude that Ritchie accidentally pointed his gun at Weathersby. Based on the record, Weathersby’s alleged emotional injury was clearly a result of Ritchie’s alleged intentional act of pointing his gun at her.

Weathersby alleged in her complaint that Ritchie aggressively confronted her and pointed a gun at her at close range without provocation. Ritchie’s alleged act of pointing his gun at Weathersby intentionally created a direct risk of mortal fear and emotional harm. Therefore, Ritchie should have reasonably expected the consequences of his action because of the risk of harm he created. Therefore, the Court of Appeals concluded that the incident was not an “event” triggering coverage, and Meemic had no duty to indemnify or defend Ritchie.

Meemic also argues that it is entitled to summary disposition under MCR 2.116(C)(10) on the basis of a policy exclusion. For the exception to apply, an “occurrence” was required to trigger the policy. Because the incident was not an “occurrence” under the policy because a reasonable person in Ritchie’s position should have expected such conduct to cause an unarmed, non-threatening stranger severe emotional distress.

Weathersby cannot avoid the policy provisions regarding the intentional nature of Ritchie’s conduct by relying on her pleading characterizing his conduct as reckless use or misuse of a firearm. Regardless of whether Weathersby describes Ritchie’s conduct as abusive or negligent, she is suing Ritchie for emotional harm resulting from Ritchie’s intentional acts. In light of the intentional nature of Ritchie’s alleged conduct underlying Weathersby’s claim, the Court of Appeals agreed that Meemic was not obligated to defend and indemnify Ritchie, regardless of whether Weathersby pleaded negligence, assault, or both. The intentional act underlying Weathersby’s claims and the alleged injury were the same under both theories.

The Court of Appeal’s conclusion was not changed, although it accepted Ritchie’s version of events as the one most favorable to Weathersby. Ritchie testified in his deposition that he approached Weathersby cautiously, helped her find his client’s address, and kept his gun at his side, pointing at the ground at all times with his finger off the trigger. According to his version of the meeting, coverage would still not be available.

If the discoverer believed Ritchie’s version, Ritchie (and Meemic) could not be held liable for her injuries because the lack of proximate cause would defeat her negligence claim. If the finder believed Weathersby’s account, Ritchie would have committed an intentional act that was not covered by the Meemic policy. Thus, regardless of whose account one believes, Weathersby cannot conceivably recover under the policy, so the appeals court concluded that Meemic had no duty to defend or indemnify Ritchie.

Insurance, by definition, applies only to contingent or unknown events. Pointing a weapon at a stranger to force off one’s property and cause fear of immediate death and emotional distress cannot be contingent, unknown, accidental, or an event. No one can obtain a defense or remedy if it does not occur. The Court of Appeals found that some part of Weathersby’s claim was intentional conduct by Richie and the attempt to exploit the coverage by alleging negligence did not work because Weathersby still needed to prove that Ritchie pointed a gun at her and threatened her life. .