Only insured persons entitled to defense or compensation 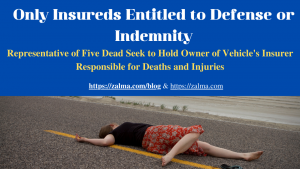 IN Motorists Commercial Mutual Insurance Company v. Roger Hartwell; Lynnway Auto Auction, Inc., Security Insurance Company; a. al. Nos. 21-1603, 21-1636, United States Court of Appeals, First Circuit (November 23, 2022), the plaintiff argued that it owed neither defense nor indemnification to persons not insured by it for claims that a vehicle the named insured owned while driven by an employee of an auctioneer killed five people and injured many.

The dispute arose out of an auction where a motor vehicle displayed for bidding suddenly accelerated into a group of participants, killing five and injuring many others. Motorists Commercial Mutual Insurance Company (“Motorists”), which insured the dealership that owned the vehicle, sued for a declaration that its policies did not cover the auctioneer or its employees who were behind the wheel of the vehicle when it struck the victims. Defendants include those claiming an interest in motorist coverage: the victims, the auctioneer and its employees. Both sides moved for summary judgment. The District Court granted the request for a quick judgment in favor of Bilister.

Nashua Automotive, LLC is a New Hampshire car dealership that sells new and used cars. It is owned by a dealer group called AutoFair, Inc. and operates under the name “AutoFair Volkswagen of Nashua.” (“Nashua.”)

While Nashua sells most of their vehicles “retailer” (to the public), about 8% or 9% of their revenue comes from vehicles sold “wholesale” (online or at an auction). For its wholesale vehicles, Nashua partners primarily with a company called Lynnway Auto Auction, Inc., which operates an auction facility in Billerica, Massachusetts. Neither AutoFair nor Nashua owns Lynnway, and Lynnway does not own Nashua or AutoFair.

In April 2017, Nashua received a 2006 Jeep Grand Cherokee as a trade-in for a new vehicle that it sold. Nashua arranged for Lynnway to auction off the Jeep. On May 3, 2017, while that Jeep was being auctioned inside Lynnway’s Billerica facility, it accelerated into a crowd, causing several serious injuries and five deaths.

At the time of the accident, Lynnway employee Roger Hartwell was in the driver’s seat of the Jeep, although he claims the vehicle accelerated uncontrollably despite his attempts to stop it.

Eventually, the victims and their estates filed a series of lawsuits in Massachusetts state court, alleging multiple theories of liability against Lynnway, Hartwell, Nashua, and AutoFair, as well as other related individuals and entities.

Of the various insurance companies whose policies may be involved in the underlying claims, this case involves only one: Motorists Commercial Mutual Insurance Company. Motorists provided a liability policy (“the primary policy”) that covered AutoFair, Nashua and other AutoFair-affiliated dealers as named insureds, but did not name Lynnway or Hartwell among the insureds. Motorists also provided a so-called “commercial umbrella” policy (the “Umbrella Policy”), which provided supplemental coverage above the primary policy limits to many of the same named insureds, including Nashua and AutoFair.

The primary policy includes a “garage coverage form”. This form has been modified by a New Hampshire Changes in Policy endorsement (“New Hampshire Endorsement”).

The New Hampshire Endorsement amended the definition of “Who is an insured” to include “[a]no one else while you, with your permission, use a covered “car” that you own . . . except . . . [s]someone who uses a covered ‘automobile’ while he or she is employed in a business selling, servicing or repairing ‘automobiles’ unless that business is yours.”

The umbrella policy, in turn, provides additional coverage for bodily injury, but contains an “Automobile Liability-Following Form” endorsement, which states: “Except when coverage is available to you under the underlying policies listed in the Schedule of Underlying Insurance, this policy does not apply for ownership, maintenance, operation, [or] use . . . of any car when you are away from premises owned by, leased to or controlled by you.”

The umbrella policy also defines “who is an insured” for that policy, specifically excluding “[a]new person employed by or engaged in the duties of a car sales agency. . . that you do not operate.”

Motorists sought a declaratory judgment that its policies do not provide coverage for victims’ claims against Lynnway and its employees. The defendants include Lynnway and Hartwell (“Lynnway Defendants”) and the accident victims who filed lawsuits against the State (“Victim Defendants”). All defendants moved for summary judgment, prompting a cross motion from motorists. Motorists pointed to the exclusion of auto companies that motorists claimed foreclosed coverage under the primary policy. It also argued that its umbrella policy’s subsequent endorsement provides automatic coverage no broader than that provided for in the primary policy.

The district court agreed with Bilister on all counts and granted summary judgment in its favor.

It is axiomatic that interpretation of an insurance policy is a matter of law. An appellate court begins its analysis by examining the plain and ordinary meaning of the words in their context to construe the terms of the policy as a reasonable person in the insured’s situation would do based on more than a casual reading of the policy as a whole.

On appeal, both the Lynnway defendants and the victim defendants argued that the coverage provided by the broad coverage clause of the primary policy survives that policy’s auto carrier exclusion as well as its temporary license exclusion. They also insist that the umbrella policy provides coverage separately.

The parties agreed that Lynnway and Hartwell are covered by the primary policy unless one of the two exclusions asserted by motorists applies. As modified by the New Hampshire Endorsement, the exception exempted from the definition of insured “[s]someone who uses a covered “car” while he or she is in the business of selling, servicing, or repairing “cars” unless that business is yours.” “Your” in this language refers to a named insured—in this case Nashua. Lynnway’s articles of incorporation describe it as “a general auto auction business” whose purpose is “to auction, sell and distribute automobiles” and “[t]o get involved in purchasing activities, . . . [and] sell. . . all types of new and used cars.”

The First Circuit held that someone engaged in an auction business is engaged in a sales business.

The language in question is clearly intended to ensure that coverage does not generally extend to persons or entities engaged in any business of selling automobiles, while making an exception. The question raised here is the scope of this exception. That obviously preserves coverage for Nashua and its employees. Interpreting the “business” that is “yours” to mean Nashua’s business enterprise — i.eits dealerships that sell cars—accomplish this goal.

No reasonable insured who obtained the policy would have any interest in paying for a policy that provided coverage for another person working for another unrelated seller of automobiles. Lynnway maintained its own insurance policies, whose providers have acknowledged the availability of coverage. The fact that Hartwell was employed by and subject to Lynnway’s control strengthens the conclusion that he did not work in Nashua’s business.

The First Circuit therefore concluded that the primary policy’s automobile business exclusion defines the policy’s insured to exclude Lynnway and Hartwell from coverage for the underlying claims here.

Defendants next argued that the umbrella policy provides coverage for the underlying claims. The phrase “follow form” refers to the practice, common in excess insurance, of having the second layer coverage essentially follow the primary layer provided by the primary insurer. Given that the underlying primary policy does not cover the asserted liabilities, the umbrella policy and the district court’s judgment are also not upheld.

The five deaths and multiple injuries prompted a search for all possible insurance coverage to provide the victims with sufficient funds to reimburse the victims for the runaway Jeep. The attempt was understandable. The arguments were not. The First Circuit read the entire policy, applied the facts of the accident and the relationships of the people involved, and necessarily found that the motorist policies provided no coverage for the auctioneer and the driver of the Jeep. The analysis was clear, logical and applied the clear and unambiguous meaning of the policy and its exclusion.