NO LICENSE NO COVER | Zalma on insurance 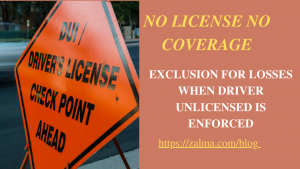 On June 24, 2020, Gates applied to Founders for auto insurance coverage. In the application form, Gates stated that his driving privileges were suspended in the state of Indiana, and he sought SR 22 insurance coverage required by the state during the license reinstatement process. The Founders issued an SR 22 policy, which included an exemption provision applicable if Gates failed to obtain a valid driver’s license within sixty days (the “Policy”).

Seventy-six days later, on September 8, Gates was driving his insured vehicle when it collided with a tractor-trailer driven by Ehlen. The tractor-trailer was owned by DTAK, LLC and insured by Great West. At the time, Gates did not have a valid driver’s license.

Great West sued Gates for damages resulting from the collision. Shortly thereafter, the founders sued for declaratory judgment, seeking a declaration that they were not obligated to provide insurance coverage for Gates, pursuant to an exclusion in the policy, because Gates had been driving without a valid driver’s license at the time of the collision.

The interpretation of an insurance policy is primarily a question of law for the court, and is therefore an issue particularly suited for summary judgment. Even if ambiguities are construed in favor of the insured, clear and unambiguous policy language must be given its ordinary meaning.

The policy provided that: “No coverage is provided under any part of this policy if, at the time of the accident, your insured car or a temporary replacement car is being used by a person who: a. Is not a licensed driver; or b. Is without a valid driver’s license; or c. Whose driver’s license is revoked or suspended; d. Whose driver’s license has been expired for more than 30 days; or e. Violates any condition of their driving privileges; or f. Is not legally entitled to drive a motor vehicle under Indiana law. …”

Gates was driving without a valid driver’s license on the day of the collision. The district court concluded that insurance coverage was excluded according to the simple terms of the insurance.

Great West did not argue that the policy’s exclusion clause was ambiguous but rather that it should be given no effect under the circumstances. Specifically, Great West alleges that Founders waived its right to enforce the waiver clause because it did not conduct an investigation into the status of Gates’ driver’s license before he took his final premium payment.

The Court of Appeal noted that the general rule is that if a party to a contract performs acts acknowledging that the contract still exists, such as accepting rental payments, it waives specific performance of the terms of the contract and there can be no forfeiture. This rule is based on principles of general fairness: a landlord cannot take the position that a lease is valid for a purpose, e.g. collection of rent, and yet declare it void for other purposes.

Great West identified no similar circumstances and indeed no dispute of material fact. It is undisputed that at the time Gates submitted his August premium, the policy remained in full force. The founders did not claim otherwise. The founders had not issued a termination notice at the time and did not until Gates failed to file a premium payment in September.

The third party’s right to recover through liability insurance is not absolute.

The source and means of recovery are based on the insurance contract itself. Because the policy contains an unambiguous exclusion clause clearly applicable to the undisputed facts, the Court of Appeals could discern no basis on which to disregard the plain language of the exclusion clause. It concluded that Founders was entitled to judgment as a matter of law and that there is no genuine dispute of material fact.

Insurance is a contract. The terms of the policy, if they are unambiguous, must be applied as written. Because Gates was unlicensed at the time of the accident, the clear and unambiguous language of the policy precluded coverage. The injured party therefore has no rights against Gates’ insurers. They could, of course, obtain a judgment against Gates and collect from his assets. An injured party has no right to recover from the tortfeasor’s insurer. The tortfeasor only has the opportunity to do so if the insurance provides insurance cover for the claimed damages.