No insurance covers every risk of loss 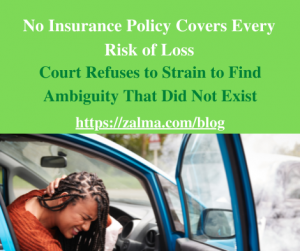 Go to substack at substack.com/refer/barryzalma

IN ERIE INSURANCE EXCHANGE v. DRAGANA PETROVIC, no. 1-21-0628, 2022 IL App (1st) 210628-U, Court of Appeals of Illinois, First District, Second Division (November 15, 2022) the circuit court granted summary judgment in favor of the insurer declaring that it had no duty to indemnify or defend the insured because the underlying accident occurred while the insured was driving his personal vehicle during the scope of employment, triggering the policy’s “automatic exclusion.”

Erie Insurance Exchange (Erie) sued the defendants, Aral Construction Company (Aral) and Arunas Alasevicius (Alasevicius) and Dragana Petrovic (Petrovic), seeking a declaration that Erie was not obligated to defend or indemnify Aral or Alasevicius in the underlying negligence claim . by Petrovic.

In the underlying negligence claim, Petrovic alleged that a truck driven by Alasevicius hit her open car door as she exited her parked car, knocking her unconscious. Petrovic further argued that Aral owned or operated the truck that struck her and that Alasevicius was acting within the scope of his employment with Aral at the time of the accident. Both Aral and Alasevicius were insured under commercial general liability insurance with Erie (the Insurance) at the time.

Erie alleged that: (1) Alasevicius failed to provide it with proper notice of the accident; and (2) that coverage was barred under the policy’s “auto exclusion” provision. Following discovery, Petrovic and Erie filed cross-motions for summary judgment seeking a declaration regarding Erie’s duty to defend Aral and Alasevicius. The trial court entered judgment in favor of Erie and against Petrovic.

The motor vehicle accident at the heart of the underlying negligence claim occurred on October 25, 2017 in Chicago. Alasevicius was driving a truck when he hit the open car door of Petrovic’s parked car as she tried to get out of it, knocking Petrovic unconscious. Alasevicius stopped the truck and got out, but when Petrovic regained consciousness, he left.

Petrovic sued Alasevicius for negligence. Specifically, the amended complaint alleged that Petrovic suffered a closed head injury with brain damage including numerous side effects, such as visual impairment and headaches. Petrovic incurred $300,000 in medical bills, $75,000 in lost income and $2,085.80 in damage to his car.

At the time of the accident, while Aral was insured under the policy of Erie, the Erie policy entitled “Fivestar Contractors Policy” is a commercial general liability policy and was issued to Aral with a limit of $1 million. The insurance provides liability protection for bodily injury and property damage arising from Aral’s operations

In terms of the scope of coverage, the policy contains a number of exclusions including, relevant to this appeal, the “auto exclusion” clause, which states that the policy does not apply to:

“Bodily injury” or “property damage” arising out of the ownership, maintenance, use or transfer to others of any *** “car” *** owned or operated by or leased or lent to any insured. Use includes operation and “loading and unloading.”

This exclusion applies even if the claims against an insured allege negligence or other wrongdoing in the supervision, employment, employment, training or supervision of others by the insured, if the “event” that caused the “bodily injury” or “property damage” is involved. ownership, maintenance, use or transfer to others of any *** “car” *** owned or operated by or leased or lent to any insured.

The insurance also contains a number of conditions. Relevant to this appeal, the term entitled “Duties in Event, Tort, Claim or Litigation” requires the insured to notify Erie “as soon as practicable of any “occurrence” or offense that may give rise to a claim.” Nearly two years after the accident, on September 10, 2019, Alasevicius notified Erie of the accident and the underlying lawsuit. One month later, on October 21, 2019, Erie sued for declaratory judgment and sought a declaration that it had no obligation to defend or indemnify Alasevicius or Aral under the policy. Only Petrovic participated in the declaratory judgment.

To determine the meaning of the insurance, the court must interpret the insurance as a whole, taking into account the risks assumed, the object insured and the purpose of the entire contract. If the words used in the policy, given their plain and ordinary meaning, are unambiguous, they must be applied as written. However, if the words of the policy are susceptible to more than one reasonable interpretation, they will be considered ambiguous and will be strictly construed in favor of the insured and against the insurer who issued the policy.

To determine whether an insurer has a duty to defend an action against the insured, a trial court must compare the allegations of the underlying complaint with the relevant elements of the policy.

An insurer may decline to defend when the underlying complaint considered in light of the entire policy precludes the possibility of coverage.

In the instant case, after reviewing the “automatic exclusion” provision of the policy and comparing it to the allegations in Petrovic’s amended complaint and the pleadings and documents submitted by the parties, the Court of Appeals found that Petrovic failed to state facts either actually or potentially prejudicial to the case within the insurance coverage.

The policy for Aral is general commercial liability coverage, which contains an “automatic exclusion” provision, which expressly excludes coverage for “bodily injury” or “property damage”” arising out of the ownership, maintenance, use or transfer to others by any ***’auto’ *** is owned or operated by *** any insured.”

Petrovic made numerous legal admissions that, according to the policy, Alasevicius could be both an executive officer and an employee, and that at the time of the accident he was in fact performing work as a regular employee of Aral, to trigger the “automatic exclusion” provision. A legal admission is a conscious, clear and unequivocal statement by a party about a concrete fact known to the party.

As Petrovic himself admits that Alasevicius was acting as Aral’s “employee” at the time of the accident, he was “insured” under the policy and the “automatic exclusion” provision applied to cover the accident.

In its plain and ordinary terms, the “automatic exclusion” provision applies to “all insureds” and therefore to both “executive officers” and “employees” of Aral.

Petrovic’s interpretation of the insurance. the contrary would lead to an absurd result.

In the instant case, Petrovic’s interpretation of the policy language is neither reasonable nor supported by legal authority. Under these circumstances, the court declined to make the effort to find an ambiguity where none exists.

The Illinois Court of Appeals acted as required and interpreted the CGL as written. Petrovic was seriously injured by Erie’s insured and if the coverage applied would have responded as, I can only assume, the auto insurer paid the limits of its policy. Erie was the target for Petrovic because she needed some way to get compensation for her serious injury. Not everyone is insured for all the risks the insured faces. No matter how deserving Mrs. Petrovic was; regardless of the severity of her injury; the court could not create insurance coverage that did not exist. No insurance covers all risks of injury.

Please consider subscribing to my publications on substack at substack.com/refer/barryzalma