No duty to defend | Zalma on insurance 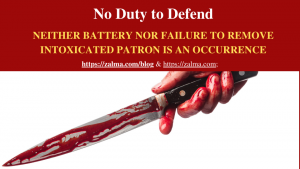 Elliott alleged that Spike’s was negligent under Illinois law for failing to maintain security personnel on the premises, failing to remove intoxicated persons from its premises, failing to protect Elliott from reasonably foreseeable criminal activities committed by its patrons, and failing to establish procedures to maintain the security. of its invitees. Elliott also argued that Spike was otherwise careless and negligent in providing adequate security; asserted a claim against Spike’s under Illinois’ Dram Shop Act; and a claim for damages against Lyell.

Spike’s was insured under a Commercial General Liability policy issued by CFSIC (the “Insurance”). The policy had liability limits of $1,000,000 per occurrence and a general aggregate limit of $2,000,000. Spikes sought coverage under the policy for the claims asserted against it in the underlying action. However, CFSIC notified Spike’s in writing that it was not obligated to defend or indemnify Spike’s based on the terms of the policy.

CFSIC filed a complaint for declaratory judgment seeking a declaration that it has no duty to defend or indemnify Spikes under the policy. Both Spike’s and Elliott failed to answer the complaint, and the presiding judge entered default judgment pursuant to Federal Rule of Civil Procedure 55(a) as to both Defendants on July 22, 2022. CFSIC then moved for Default Judgment.

Rule 55(a) requires the clerk to enter default when a party against whom judgment is sought has failed to plead or otherwise defend and that failure be shown by affidavit or otherwise.

A duty to defend arises if the allegations in the complaint fall within or potentially within the insurance’s coverage. This is known as the “eight corners” rule: the court compares the four corners of the underlying complaint to the four corners of the policy to determine whether the facts alleged in the underlying complaint fall within or potentially within coverage. If they do, the insurer has a duty to defend.

By default, Elliott and Spikes have failed to dispute CFSIC’s contention that the policy offered no coverage because the underlying complaint does not allege bodily injury or property damage from an “occurrence” as that term is defined in the policy-i.e, an accident. Accordingly, the Court finds that CFSIC is entitled to default judgment as to Count I of the Complaint for declaratory judgment.

CFSIC alternatively argues that even if the complaint contains sufficient allegations to support coverage, the policy contains an exclusion that bars coverage. The total liquor liability exclusion for coverage A in the policy means that there is no coverage for “bodily injury” or “property damage” for which an insured may be held liable because of:

CFSIC contends that the allegations in the underlying complaint fall squarely within the policy’s total liquor liability exclusion. Thus, even if the policy offered coverage for the bodily injury alleged by Elliott under Coverage A, coverage would be excluded by application of the exclusion.

Because the total liquor liability exclusion applies to exclude all coverage provided by the policy, CFSIC was entitled to default judgment as to Count II of the complaint for declaratory judgment. CFSIC was not obligated to defend Spikes in the underlying action.

Although the duty to defend is greater than the duty to indemnify, even when the USDC concluded that CFSIC had no duty to defend, it declined to rule on the duty to indemnify because the trial of the underlying action could—if a miracle occurs—find cause to the stabbing which is not out of the question, however improbable it may be. CFSIC should therefore monitor the underlying case to protect its rights and to avoid collusion between the claimants and the insured defendants.