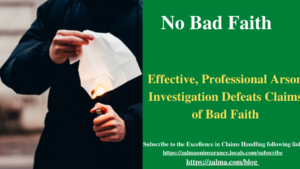 This case arose out of an insurance dispute between the Lemons and State Farm regarding a claim the Lemons filed after a fire destroyed their residence.

The Lemons had been married for about two years at the time of the fire and their relationship was at times turbulent. For example, law enforcement officers had responded to domestic accidents at their homes. On April 26, 2019 – less than a week before the fire – Candice called the Franklin County Sheriff’s Office to report that Donald had moved out of the residence and that she was afraid he was going to “rattle” the place.

At the time of the fire, the couple were separated and headed for divorce. While the Lemons deny their finances were bad, they admit they were seasonally behind on bills. Candice had inherited more than $100,000 in 2015, but Lemons had spent all of that money by May 2019.

Candice gave inconsistent statements about whether Donald was in the house in the hours leading up to the fire. The day after the fire, she told a State Farm representative that Donald had been home about an hour before the fire to pick up some of his fishing gear. She later denied saying this. Donald denies having been at the home in the hours before the fire.

After the fire, the Lemons filed a quick claim with State Farm. At the time of the fire, the home had a value of $76,900. The Lemons submitted an inventory of personal property totaling $173,137.57, although it is not clear their home could accommodate the number of items claimed.

State Farm hired the Independent Forensic Investigations Corporation (IFIC) to investigate the fire. Lonn Abeltins, an IFIC investigator, traveled to the home on May 7, 2019 and June 12, 2019 to conduct his investigation. . As part of his investigation, the Abeltins collected four pieces of debris from the rubble and then sent them to the Armstrong Forensic Laboratory to be tested for accelerants. One of the samples tested positive for gasoline. Stacy Niemann, an IFIC investigator, conducted several interviews with Lemons, McKinney, Craighton, Einspahr, a neighbor and various firefighters who were at the scene.

In his final report to State Farm, dated May 17, 2019, Abeltins wrote: “This fire originated in the southeast corner of the house. There is a door at that location with steps going down into the basement. Heavy fire damage and charring, consistent with use of a flammable liquid, was noted in the southeast corner of the house. Gasoline was found in the sample from the doorway at that location. In my opinion, this fire loss was combustible in nature.”

State Farm’s investigation of the facts and circumstances surrounding the fire revealed that both named insureds had an opportunity to start the fire and that both named insureds had motive to start the fire, including but not limited to financial motives. The home was overinsured. It was purchased for $40,000, had an assessed value of $86,900 and was insured for $276,100 with an additional $207,075 in contents coverage.

The investigation revealed that the named insured misrepresented or concealed material facts and circumstances surrounding the fire, including but not limited to both providing new information during their investigation under oath that was more likely than not fabricated to explain the presence of a flammable liquid in the area of ​​origin. Additionally, Candice misrepresented and concealed information about their financial situation at the time of the fire by representing that they had so much money in savings that the bank assigned them a personal banker. However, the bank records show little money in the bank accounts at the time of the fire.

After filing this suit, Lemons hired an expert, David Gossman, to conduct an investigation into the cause and origin of the fire which concluded that the fire was “accidental” in that it “started on the west or northwest side of the property.”

Under Iowa law, Count II is a first-party bad faith claim because it involves an insured’s attempt to recover for its own losses allegedly covered by the policy. To win such a claim, the plaintiff must show

A defendant can defeat a bad faith claim by showing that it only had a reasonable basis for denying coverage—not by proving that all of its coverage positions were reasonable. In short, when it decided to deny the Lemons’ claim, State Farm had before it a great deal of evidence indicating that the fire was flammable in nature and that either or both of the Lemons had motive to start a deliberate fire.

Courts and juries do not weigh the conflicting evidence before the insurer; they determine whether evidence existed to justify denial of the claim. State Farm met its burden of showing, as a matter of law, that reasonable minds could conclude that the lemons were not entitled to coverage.

As such, Lemon’s bad faith claim failed with respect to the first element—whether their insurance claim was “fairly debatable.” State Farm was entitled to summary judgment on Count II in the state court of Lemons.

Under Iowa law, a mere breach of contract, without accompanying tort, cannot sustain a claim for punitive damages. State Farm is therefore entitled to summary judgment on Count III, which asserts a claim for damages.

Because States Farm is entitled to summary judgment on the bad faith claims, the only substantive claim remaining for trial is Count I, Lemon’s breach of contract claim.

For the following reasons:

The defendant’s motion for partial judgment is granted. As a result, Counts II and III were dismissed.

The case will proceed to trial against Count I.

The evidence available to State Farm showed beyond doubt that the Lemon’s attempted to defraud State Farm by causing a fire in their house, claimed personal property in excess of the potential for the property to be in the house at the time of the fire, that they had overinsured their property, and that they had a financial motive to set fire to it. No reasonable jury, when presented with such facts, would believe that the fire was accidental and that the claim made was fair and reasonable.

Barry Zalma, Esq., CFE, now limits his practice to that of an insurance consultant specializing in insurance coverage, insurance claims management, bad faith and insurance fraud almost equally for insurers and policyholders. He practiced law in California for more than 44 years as an insurance coverage and claims attorney and more than 54 years in the insurance industry. He can be reached at http://www.zalma.com and zalma@zalma.com.