New York Court Strikes Insurers Who Subrogated Their Own Insureds 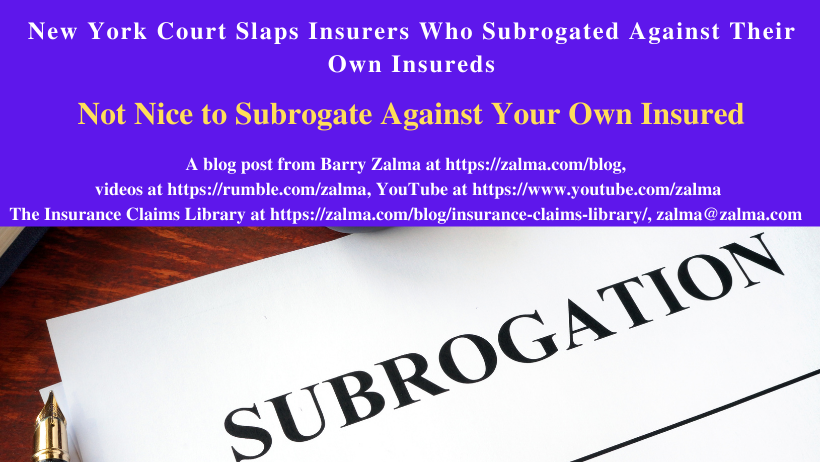 Not nice to subrogate against your own insured

The Port Authority of New York and New Jersey (“Port Authority”) operates LaGuardia Airport and engaged LaGuardia Gateway Partners LLC (“LGA”) as the developer of a construction project at LaGuardia (the “LGA Project”). In April 2017, LGA entered into a subcontract with Skanska (the “Contract”) to perform work on the LGA project. Section 20.1 of the Agreement requires LGA to obtain commercial general liability insurance under which Skanska would be the first named insured and LGA would be a named insured. The contract required Skanska to “indemnify, defend and hold harmless [LGA] for any losses or costs incurred [LGA] . . . to the extent caused by . . . any third party claims for bodily injury. . . arises from (1) [Skanska’s] negligent performance. . . or (2) any violation of [the Contract] by someone [Skanska] party or any breach thereof by [LGA] directly caused by the acts or omissions of anyone [Skanska] party.” The contract contains a similar clause requiring Skanska to reimburse the port authority for its losses.

Fabiani Cohen & Hall (“FCH”) was retained as defense counsel for LGA and the Port Authority. In March 2021 Lloyd’s emailed FCH asking why it had not brought a third party action against Skanska for common law damages as Mayo was employed by Skanska. Following discussions between Lloyd’s, Zurich and FCH, Zurich American filed this action for declaratory judgment.

Zurich sought a declaratory judgment from the USDC that any claims Lloyd’s potentially brought against Skanska for common law indemnity or contribution were barred by New York’s anti-subrogation doctrine. The only issue before the USDC was whether the anti-subrogation rule precludes Lloyd’s from having its insureds, LGA and the Port Authority, sue its other named insured, Skanska, for common law or contributory damages.

Under New York law, the antisubrogation rule provides that “[a]n insurer…has no right of subrogation against its own insured for a claim arising out of the very risk for which the insured was covered.” N. Star Reins. corp. v. Continental Ins. Co82 NY2d 281, 294 (1993).

The rule was established in part to prevent the insurer from passing on a loss to its own insured and to reduce the possibility of a conflict of interest between the insurer and the insured that might otherwise affect the insurer’s incentive to provide defense for the insured.

The USDC agreed with Zurich that the anti-subrogation rule applies here because the two essential elements are met.

Second, the risk of injury to Skanska’s employees is covered by Lloyd’s Policy. Lloyd’s Policy provides for an exemption from employer’s liability and an insured termination of contract, which means that all contractual claims for damages asserted by the LGA or the port authority against Skanska are covered.

In summary, while the theoretical possibility exists for a contractual damages claim in practice, the application is blunted by the clauses that immediately follow. Lloyd’s argued that a claim for indemnification or contribution against Skanska is not a covered risk and, in the absence of a viable claim, there is no conflict of interest that the anti-subrogation rule is intended to guard against.

Zurich’s motion for summary judgment was granted because the USDC, pursuant to New York law, declared that the anti-subrogation rule precludes Lloyd’s from bringing a claim for common law indemnification or contribution against Skanska, its insured.