My thanks for my family and yours 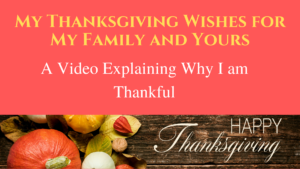 Watch the full video at https://rumble.com/vposoi-my-thanksgiving-wishes-for-my-family-and-yours.html and at https: // youtu. be / bJmB5vqw6Yg

My family and I have a lot to be thankful for this year, not least the care our cardiologist provides who takes care of me and my wife Thea. I am personally in good health, walk four to 50 miles a day and as a retiree I work only six to eight hours a day and do what I love most, write about insurance, insurance claims, insurance legislation and act as a consultant for insurance claims and expert witness. [19659005] To me I am grateful for you, my friends, customers and readers of "Zalma's insurance fraud letter", my blog "Zalma about insurance" and my books and other writings, including the new third edition of ten volumes of my dissertation, "Zalma on Insurance Claims. "

As a first-generation American, I am honored to be able to celebrate Thanksgiving with all Americans, which began when the United States was a dream and just a colony of Britain to thank for the good things in life at least once a year. It took Abraham Lincoln, our greatest president, to make it an official holiday. The Thanksgiving weekend gives me and my family the opportunity to consider the blessings my family and I have received and to thank everyone who has made it possible.

Please allow me this opportunity to explain to you everything I and my family can thank for:

1. I've loved my wife for 54 years since we first met when she was nine and I was twelve.
2. I am grateful that she still loves me and let me make it clear every day that I love her more now than I did when she ignored me when I was 12.
3. My three grown children who are successful in their own right.
4. That my three children, my soon-to-be five-year-old grandson, live nearby, put up with my wife and I, and are healthy, successful and mostly happy in what they do.
5. That my grandson is now a successful college student at Puget Sound University in the state of Washington.
6. My clients who for more than 54 years have allowed me to support myself with what I love: practice law until I leave my license inactive, act as a consultant, testify as an expert witness and write material to help others provide excellence in claims service as members of the insurance profession.
7. My Publishers American Bar Association, Full Court Press, Fastcase.com, Thomson Reuters and Amazon.com.
8. My dear deceased parents and grandparents because they had the sense to leave the Ottoman Empire in the early 20th century so that we could avoid the Holocaust and I could be born American.
9. My country because I have given myself a place to live and work in peace and complain about it without fear.
10. The state of California, where I was born and have lived for 79 years, because I got my home and my family growing, and for the ability to pay the high taxes for the privilege.
11. You who read what I write and get some of it.
12. Seventy-nine years of mostly good health, but for a small heart attack and clogged arteries, it gave me the ability to continue working – albeit at a reduced rate.
13. Allows me the health and ambition to avoid my cardiologist by going every day and working on my garden and bonsai.
14. I have never visited the hundreds of friends I have never met but with whom the internet has made it possible for me to communicate in parts of the world.
15. Internet wonders that allow me to publish e-books, ZIFL and my blog directly online.
16. That my family can meet to express our gratitude for each other and our happiness again this year without needing anything other than to enjoy each other's company.
17. That most of you I know only through my publications can also gather with your families to express your gratitude.

When I enlisted in the U.S. Army in 1967 to avoid the draft, I volunteered to serve elsewhere in the world. than Vietnam and was sent, with the wisdom that only the US Army Intelligence Corps could understand, to Peoria, Illinois where I became a special agent in charge of an office that investigated people seeking security clearance. I was trained as an investigator and enjoyed every minute of the job. Until the Army, I had never seen a river without a concrete bottom just to see the mighty Mississippi as my first real river. I had never seen snow other than in the distance on mountains, only to find myself shoveling the snow away from the driveway in the small half house I rented from an old couple who could not do it themselves. My investigative assignments required me to travel through central Illinois from Iowa to the Indian border. I stopped at courthouses along the way, all of which showed signs of Abraham Lincoln practicing law there.

These experiences of courts, law enforcement officials, and court staff probably gave me the incentive to become a lawyer.

I returned home, proposed marriage with the love of my life. I started studying law at night and found my first real job where I could use the skills I learned in the army. The training was, unlike what is done at modern insurance companies, thorough. I had to read a dissertation on insurance and insurance claims management. I was sent out with experienced adjusters in all types of insurance Brandman & # 39 ;s Fund wrote, and eventually had to deal with the public under close supervision. Contrary to what was done in the insurance industry at the time, allowed me to study at night while working as a full-time insurance adjuster at the Brandmansfonden. I was lucky enough to work for a tortfeasor – Coleman T. Mobley – who did not demand that I leave the state to adjust major storm demands if it disrupted my studies in law. Since I went to law school 50 weeks a year, the only storm service I had was to work on a firestorm that burned from the San Fernando Valley to the sea off Malibu. Because of Mr. Mobley & Fireman & # 39 ;s Fund I was able to complete my studies and pass the California Bar in 1971 and allowed myself to be admitted to the California Bar on January 2, 1972.

I lowered my salary to get my first job as an associate lawyer at a law firm. who was willing to teach me to be a lawyer who handles all kinds of problems that a new lawyer can face from wills, claims for damages, divorce, drunk driving, lawsuits, deposits and dozens of orders to show cause in several courts around the Inland Empire of California. By doing so, when I started practicing law in 1972, I became a lawyer who could deal with all the issues I got.

I was lucky enough to move to an insurance law firm in Century City where I got an insurance lawyer who tried to handle over 500 active cases that, when I arrived, assigned me 250 of the cases and pointed me to the agency's library to teach me what to do. At the time, new technology was an IBM Selectrict typewriter that could erase errors from the keyboard without the need to use white color. I did legal research in the company's large library, which, when it was not enough for the task, had to drive to the County Law Library in downtown Los Angeles. Research in a large library took days to find support for a problem. I needed three professional legal secretaries to keep up with my dictation.

Now, using modern technology, I can do the same legal research in 30 minutes on Fastcase.com, need no secretary and can handle my advice, writing , education and publishing company without employees In 1979, I decided it was time to become my own boss. I started a law firm called Barry Zalma, Inc. with a secretary who came from my previous firm and took an IBM Selectrict typewriter to a small windowless office. I had received a credit from a bank that I hoped would carry us until the internship began because the only case I had was my sister's back which I could not charge. The office was equipped with a filing cabinet from my father-in-law's dentist's office and a dining room table from my wife's grandmother who had passed away.

I got my first call at 8.10 on the first day, October 1, 1979, and my internship began. I had nothing to do on October 3, 1979 so I wrote an article for publication. After that, I had no peace and the firm quickly grew to 9 lawyers and a staff to serve them all who defended people who were insured and acted as a cover for insurance companies who needed advice and defense of lawsuits in bad faith. I was more successful than I ever expected. I, whose experience was limited to Los Angeles County and central Illinois, found a need to travel to Taipei, Taiwan and London, England on behalf of my clients. I worked, as I had learned from my father who survived the Depression, 16 hours a day six or seven days a week. By the time I turned 75, my company had been reduced to a sole proprietorship and I decided it was time to stop practicing law and become a consultant and fulfill my childhood dream of becoming a writer.

I am a very happy and happy man. . I work as I love. I fulfilled my childhood dreams. I live in a home that I have owned for more than 45 years that my wife and I adapted and grew when children were born to meet our needs, have the love of my life with me and look forward to celebrating our 55th wedding anniversary next month . I am honored that my oldest daughter has returned to live with us and take care of my wife and I who can not do everything we used to do. I have three wonderful children, two great-grandchildren and all live close by. My son shares my office building and has time to visit me according to his full schedule.

I hope, on this Thanksgiving weekend, that you can join my family and me and remember that it is more important to think about our blessings and those things we have to be thankful for other than queuing up for "Black Friday" to buy a cheap flat screen TV or tablet.