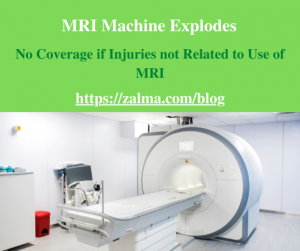 The lease required AVT to install the MRI machine at Oradell’s facility. At the end of the term, the lease stated “AVT shall uninstall, inspect, test, pack, remove and ship [MRI machine] at AVT’s expense.” The lease also stated that AVT was responsible for “repair of any damage to [Oradell’s premises] due to the removal of [MRI machine] . . . .” Additionally, the lease required Oradell to carry insurance for “loss or theft of or damage to [MRI machine] in the amount of $550,000, naming AVT as an additional insured and a loss payee . . . .”

Oradell complied with this provision by purchasing insurance from Continental. Continental issued a commercial insurance policy (Policy) to Oradell, covering the period September 21, 2014 to September 21, 2015. According to the “Coverages” section of the policy, Continental agreed to “pay the sums [Oradell] becomes legally liable to pay as damages due to “bodily injury”, “property damage” or “personal and publicity damage” to which this policy applies.”

When the MRI machine was taken out of service, Hogan testified that he “choice[ed] slightly off the ground” and was surrounded by a “white cloud of helium.” A split second later, the MRI machine exploded. The next thing Hogan remembered was “waking up on the ground.” Plaintiff and Hogan suffered injuries from the explosion.

On August 31, 2017, plaintiffs filed a third amended complaint against Oradell, Helpern, AVT, Hogan, and others. On February 22, 2018, Hogan filed a cross-claim against Continental seeking coverage under the policy.

After completing discovery, including depositions, Hogan moved for summary judgment, arguing that Continental had a duty to provide him with insurance coverage for the plaintiffs’ claims. The plaintiffs joined in Hogan’s motion.

The court concluded that there is no ambiguity here regarding the phrase “written contract or agreement” as used in the policy. The fact that litigation offers conflicting interpretations of the policy language does not render the policy language ambiguous. True ambiguity arises only when the wording of the policy is so confusing that the average policyholder cannot discern the limits of coverage.

In addition, the equipment is only taken out of service at the end of the leasing period. As stated in the lease, “[a]t the planned conclusion of this [lease], . . . AVT should uninstall, . . . delete and send [MRI machine] . . . .” According to the express terms of the lease, the lease must end before the liquidation begins.

In order for Hogan to be entitled to coverage under the policy, there must be a substantial connection between the plaintiff’s injuries and Oradell’s maintenance, operation or use of the MRI machine. The uncontroverted evidence showed that no Oradell employee was in the room when the MRI machine exploded. Nor had any Oradell employee participated in the two-day decommissioning process prior to the explosion.

On this record, there is no evidence that Oradell maintained, operated or used the MRI machine after March 4, 2015. Thus, the judge properly granted summary judgment to Continental.

It is always interesting and heartening to see a court opinion where the court reads every word of the policy, noting that for coverage to apply, the person seeking insurance must maintain, use or operate the exploding MRI machine. As they were nowhere near the machine, had nothing to do with it being decommissioned, the lease was terminated, they were not insured at the time of the explosion as it was in the control of the lessor who was working to decommission the MRI.