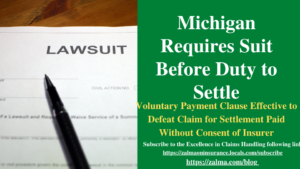 Trident Fasteners, Inc. (TFI) is an automotive supplier in Grand Rapids, Michigan that manufactures custom screws, bolts and other fasteners for use as component parts. Car mounts have a variety of uses. They can prevent leaks, distribute pressure and hold vehicles together. But when such fasteners don’t work, things can fall apart. That’s what happened to TFI’s relationship with its insurer, Selective Insurance Co. in South Carolina (Selective).

IN Trident Fasteners, Inc. v. Selective Insurance Company of South Carolinano. 21-1439, United States Court of Appeals, Sixth Circuit (August 3, 2022), the Sixth Circuit faced a claim for more than one million dollars paid, voluntarily, by an insured, without the authorization of its insurer.

When a customer threatened litigation regarding defective fasteners, TFI settled with that customer rather than wait for court filings. The issue presented to the Sixth Circuit was whether Selective had an obligation to pay for the settlement absent a lawsuit against TFI.

In addition to the standard agreements to defend and indemnify the policy, the policy also contained fairly common “voluntary payment” and “no action” provisions, including the following critical language: “No insured will, except at the insured’s own expense, voluntarily make a payment, assuming that any obligation, or incur any expense, other than for first aid, without our consent.”

In October 2018, TFI contacted Selective for coverage related to an alleged product defect, which Selective labeled Claim No. 21923029 (Insurance Claim). The insurance claim stemmed from a chain of events that had started four months earlier in June 2018, when TFI’s customer, Tenneco, along with MCS, a parts manufacturer, complained to TFI that they had received defective fasteners. The fasteners were installed in top mounts by MCS, pressed with a foam bumper by Tenneco, and installed in truck struts by General Motors Co. TFI alleges that Elm Plating Co., the supplier that heat-treats the metal fasteners, failed to properly heat-treat the fasteners, resulting in bent or broken products. This alleged defect led to a recall of the fasteners and the products that used the fasteners.

In April 2019, Selectiv then responded to TFI’s demands with a request for additional information before it would consent to TFI entering settlement negotiations with Tenneco to resolve the issue.

On May 10, 2019, Selective denied consent to TFI sending a settlement letter and instructed it not to engage in any settlement negotiations with Tenneco. However, TFI did not follow these instructions and on June 28, 2019, it settled the dispute with Tenneco only for Selektiv to refuse to indemnify TFI.

TFI sued Selective, alleging that Selective materially violated the policy, as defined in Michigan law, by acting in bad faith. TFI alleged that Selective unreasonably delayed its investigations and communications with it, refused to participate in the settlement of the insurance claim, unreasonably withheld consent to participate in settlement negotiations, unreasonably delayed sending a disclaimer and filing a defense, and refused to pay the insurance claim in violation of Michigan law . TFI sought damages in excess of $1.3 million and declaratory relief. Selective responded that it was not obligated to pay for TFI’s settlement with Tenneco because TFI did not obtain Selective’s consent and moved to terminate.

The district court granted the request. It noted that similar “voluntary payment” and “no action” clauses have been upheld and enforced under Michigan law. It then stated that these provisions would only have been waived if Selective denied liability and refused to defend an action against TFI. “Because Tenneco never filed suit against T[FI]”, the court reasoned, “Selective cannot be liable for T[FI]s settlement payment.”

Michigan courts have recognized the duty to act in good faith as an implied contractual obligation in certain circumstances. The statutory duty may arise in the context of insurance for limited purposes, including the investigation and payment of damages and settlements.

The obligation to investigate an insurance case involving third parties falls under the duty of defence. If the insurer had a duty to defend and failed to fulfill that duty, it, like any other party that fails to fulfill its contractual obligations, becomes liable for all foreseeable damages arising from the breach.

Obligation to process the insurance claim

The absence of a lawsuit against the insured also determines whether the obligation to treat the insurance claim in good faith has arisen. Michigan courts have viewed this duty as part of an insurer’s duty to pay the insured on time.

TFI also argued that it was prejudiced by the “unreasonably late” nature of Selective’s disclaimer letter.

Without a complaint against it, TFI had no claim based on a breach of duty to process insurance claims because there was no duty.

The duty to negotiate settlements likewise requires a trial before a duty to act in good faith arises. The Michigan Supreme Court has stated that “[w]as a liability insurer has sole power and control over trial of claims broughtagainst its insured, which includes obligation to jeopardize the claim if possible, the agent must proceed in good faith.” [Frankenmuth Mut. Ins. Co., 461 N.W.2d at 666]

Because Michigan courts require the filing of a lawsuit and because there was no trial, the third party in this case, Tenneco, never initiated litigation, and as a private entity. In the absence of any complaints, there was nothing that induced Selective’s obligation to investigate, settle or otherwise address the claim.

An insured cannot withhold information and then force an insurer to pay an insurance claim. The reverse would not be true, as TFI already had the facts and opportunity to investigate its insurance claim itself. TFI obtained insurance coverage from Selective to, where relevant here, hedge its third-party litigation risk. Because the risk of litigation never materialized, Selective did not owe TFI a duty of good faith and could not have breached the policy in the absence of actual litigation against TFI.

Selective had no implied fiduciary duty arising prior to the filing of a complaint. That conclusion makes resolution of this appeal straightforward based on the text of the policy. Because the parties do not dispute, the plain language of the policy is unambiguous, so the court of appeals applied the language. The policy states that TFI will not “voluntarily make a payment . . . without [Selective’s] consent”, and it will not suit Selective “if not all [the Policy’s] the conditions have been met in full.”

Because TFI settled without consent and voluntarily paid Tenneco, it violated the policy. TFI’s insurance requirements are excluded.

Because Selective’s duty of good faith under Michigan law would not arise until after the filing of a lawsuit against TFI, and given that no such lawsuit was ever filed, the insurance claim is excluded under the policy.

There is no duty to defend in Michigan until a lawsuit is filed. The insured’s failure to obtain consent from an insurer before paying $1.3 million to a claimant seeking damages for a defective product violated the clear and unambiguous language of the policy. The insurer is not without fault because an early investigation could have protected the insured and saved it money, but in Michigan they had no obligation to do so even if it would have been better for the insured and save the insurer this lawsuit.