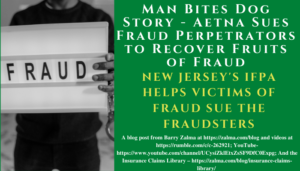 Aetna Health Inc. and Aetna Life Insurance Co. (collectively "Aetna") appeals against decisions of the Court rejecting their second amended complaint on the ground of failure to lodge a claim, and dismisses their second amended complaint as untimely. request for permission to lodge a third amended complaint, against father-daughter defendants Robert W. Kerekes ("Kerekes") and Susan Nicoll ("Nicoll"). The two were minority owners of Biodiagnostic Laboratory Systems, LLC, ("BLS"), which filed fraudulent claims of millions of dollars to Aetna. David Nicoll ("David") – Nicoll's husband and Kerek's son-in-law – was the BLS's majority owner and was convicted of various federal crimes related to the fraud, along with other Nicoll and Kerek's family members and many doctors who participated in the plan.

Aetna seeks redress over $ 32 million distributed by the BLS to Kerekes and Nicoll. Aetna claims that the funds are proceeds from the fraud and that Nicoll and Kerekes are liable to Aetna under the New Jersey Insurance Fraud Prevention Act ("IFPA"), N.J.S.A. 17: 33A-1 to -30, because they deliberately took advantage of the BLS's fraud and they failed to expose the fraud to Aetna. Aetna also claims that the BLS's payments to Nicoll and Kerekes are invalid under the Uniform Fraudulent Transfer Act ("UFTA"), as the BLS made them with the actual intent to prevent, delay or deceive Aetna, as a BLS creditor.

The main question here is whether Aetna, in its second amended complaint, adequately invoked its IFPA and UFTA requirements. We conclude that it did, and the trial court erred in failing to read the complaint indulgently by incorrectly applying the increased standard of invocation applicable to fraud claims, and by misinterpreting the meaning of "knowingly" used in IFPA. As we reintroduce the second amended complaint, we refer it back to the court to reconsider Aetna's motion to file a third amended complaint, which would add requirements for, among other things, reimbursement, piercing of the "corporate veil" and the introduction of constructive trust.

In the second amended complaint, Aetna claims claims against Nicoll and Kerekes under IFPA and UFTA. Aetna also claims many claims against the direct participants in the fraud, including David, Kereke's son Kevin Kerekes ("Kevin") who was a BLS salesman, doctors who took bribes to channel business to the BLS and other BLS employees who paid the bribes .

Aetna claimed that BLS, through its salesmen and their sham companies, bribed doctors or paid them back to refer Aetnas insured to BLS for laboratory services. The BLS then filed fraudulent insurance claims with Aetna by invoicing for services not provided by the BLS, by double billing and by waiving patients' copies and deductibles.

Aetna claimed that Nicoll and Kerekes, as principals and owners of the BLS, "orchestrated, directed and / or was aware of the bribery scheme "and" deliberately took advantage of the fraudulent system. " without paying anything out of pocket. In exchange for an insignificant investment in a company that was apparently of little value, Nicoll and Kerekes received BLS payments of over $ 19 million and $ 13 million, respectively, over an eight-year period from the year following their acquisition. Aetna claims that under these circumstances Nicoll and Kerekes knew that the BLS did not operate within the law and knew of the fraudulent scheme.

In addition, Nicoll and Kerekes were both personally named in a trial such as Horizon Blue Cross Blue Shield of New Jersey (Horizon) joined during the fourth year of their ownership, claiming many of the claims Aetna later raised: that the BLS paid returns, double billed and waived patient liability in a fraudulent system.

Instead of a reply, Nicoll and Kerekes moved to to dismiss the second amended complaint under Rule 4: 6-2 (e). And after oral argument, the court upheld the motion without prejudice.

Although Nicoll and Kerekes were dismissed from the case, Aetna took their sentences as part of the discovery in the remaining case against other defendants. Five months later, Aetna applied for permission to file a third amended complaint reiterating IFPA and UFTA claims against Nicoll and Kerekes, claiming constructive trust, piercing the corporate veil and repaying the two.

In its proposed submission , Aetna strengthens its claims by asserting additional facts about BLS's formation, its operating agreements, Nicolls and Kerekes' respective backgrounds and sophisticated levels, their revenues from the BLS and the Horizon dispute. Aetna claimed that in the years before the Horizon process, Nicoll received a return of 8 196 percent on the investment, or about 262 percent annually.

The court examined the legal adequacy of the facts alleged in the complaint, assume the truth about these facts and give the plaintiff all reasonable conclusions. A submission that contains a request for exemption only needs to contain an account of the facts on which the claim is based, which shows that the applicant is entitled to an exemption. The request for dismissal must be rejected if the request has been made. By applying this liberal standard, Aetna adequately invoked facts that support the grounds for action under IFPA and UFTA.

Aetna described them in great detail, explaining that they affected the BLS: s right to payment. In other words, Aetna claimed that if it had known that the BLS had bribed doctors, double-billed and waived the patient's fees and deductibles, it would not have paid the claims.

Aetna was not obliged to claim more. Knowledge is a state of mind that is rarely proven by direct evidence. Knowing is well perceived as an awareness of or knowledge of the illegality of one's act.

In a civil action under the IFPA, the defendant's knowledge of a violation can be proved by clues, including, for example, an accused's conduct and intellect.

Despite his In short, IFPA is designed to combat insurance fraud by creating action bases based on less than elements of common law fraud. The Seventh Circuit considered that an objection-with-specificity did not apply to "an accusation of unfair conduct, since fraud is not a mandatory element under that part of the Charter." Benson v. Fannie May Confections Brands, Inc. 944 F.3d 639, 646 (7th Cir. 2019).

Aetna's claims against Nicoll and Kerekes do not rest on the elements of fraud in common law but on their knowledge the receipt of BLS fraudulent proceeds and their failure to disclose that knowledge. Regarding the BLS's underlying fraud, Aetna relied on facts with great accuracy and explained who, what, when, where and how the bribes were paid to corrupt doctors and the claims were paid for double invoicing. The trial court therefore erred in rejecting Aetna's IFPA claim in its second amended complaint.

Aetna's UFTA claim was also upheld. However, even if it is assumed that enhanced invocation is required, a party can assert intent in general. In order to be able to adequately rely on an allegation of fraudulent transfer, a complaint must state who, what, where, when and how of the transactions in question. Aetna passed that test.

Because prosecutors appear reluctant prosecutors. who commit insurance fraud and seek compensation for the victims, the insurers, Aetna and other insurance companies become proactive and try to take the profits from the crime. The defendants made millions on their fraud and Aetna, if it can prove what it claimed, will get back the millions stolen from it through insurance fraud, even if the defendants are jailed for their crime. It is time for insurance companies to strike back in a way that will hurt fraudsters the most – on their bank accounts. New Jersey is just one of many states that have an IFPA that allows insurance companies to sue or sue during Qui Tam proceedings. Aetna's actions should be imitated by all insurance victims.