Lie to your Louisiana insurer and you'll lose everything 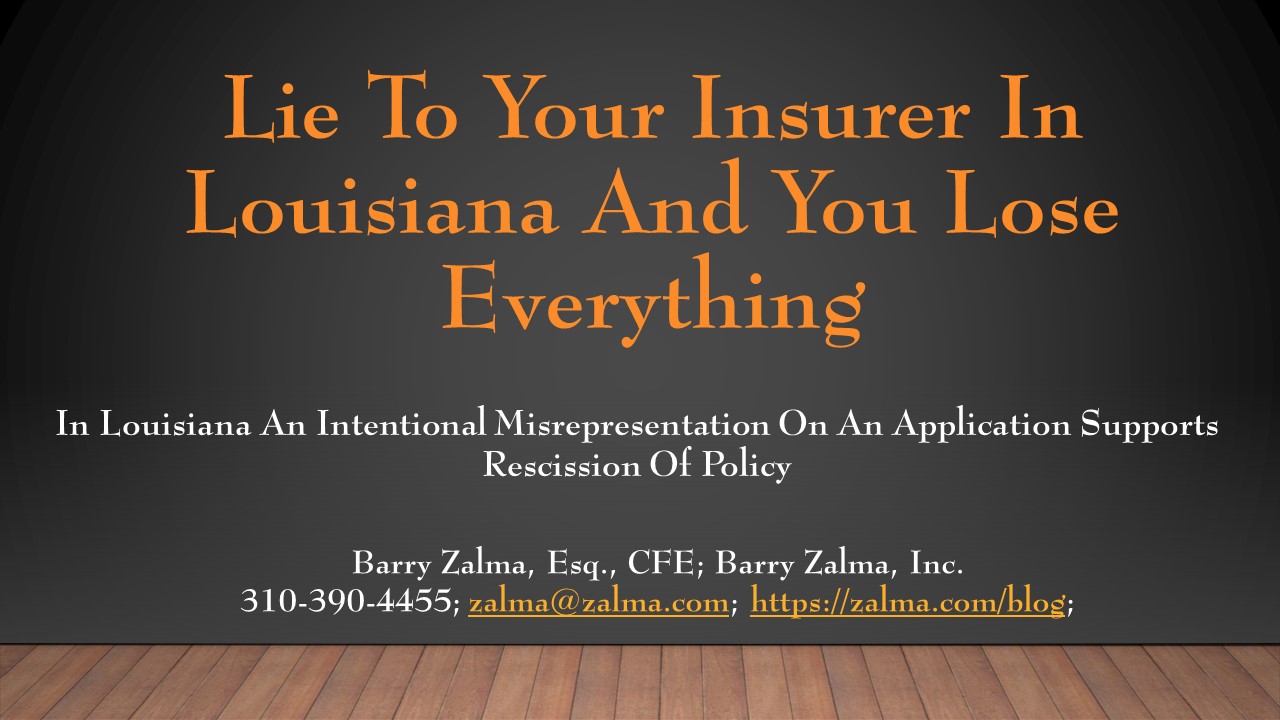 Insurance is a company of utmost good faith. Both the insured and the insurer owe the other an obligation not to do anything that deprives the other of the benefits of the contract. In Geovera Specialty Insurance Company v. Michael Odoms, No. 19-30971, United States Court of Appeals for the Fifth Circuit (November 5, 2020) Michael Odoms lied about his wife's previous bankruptcy and as a result, his insurer annulled the insurance after a fire one month after the issuance of the insurance.

Odoms owned several rental properties, including one he bought in 2018 in Marrero, Louisiana. When he applied to the GeoVera Specialty Insurance Company for insurance coverage in that house, Odoms represented that neither he nor his

husband Ericka Odoms had “been involved in one. . . bankruptcy for [previous] five years.

Odoms bought a house at 6565 Benedict Drive in Marrero, Louisiana ("Benedict house"). On the same day, Odoms applied for tenant insurance through Susan Angelica Insurance Agency ("SAIA"). After GeoVera brought an action for the purpose of declaring relief and revoking the policy, the district court lost a summary judgment in favor of GeoVera based on its conclusion that Odoms deliberately misrepresented a material fact in the insurance application in order not to disclose his wife's bankruptcy. The district court announced a declaration relief and allowed GeoVera to revoke Odom's policy.

After Odoms signed and filed the Benedictus House insurance application, GeoVera immediately issued the policy. Exactly one month later, on July 21, 2018, the Benedict House burned down. Odoms then filed an insurance claim with GeoVera, which demanded that he testify via two investigations under oath ("EUO"). During an EUO, he acknowledged that different applications contained the same bankruptcy-related question as Benedict's house application and that they were all answered in the negative. Odoms testified that he was aware of Ericka's bankruptcy when he applied for these insurances. Odoms admitted that if Ericka "was involved in a bankruptcy in 2010 to 2015", this would have made his answer to the applicants' bankruptcy question incorrect.

During her EUO, Erica testified that Odoms knew about her bankruptcy. Ericka further stated that Odom's answer to the bankruptcy question was incorrect.

According to Louisiana law, the Navy Rule does not allow the revocation of an innocent misrepresentation, to cancel an insurance in the event of misrepresentation. the justification, the insurer must prove that:

(1) the insured made a false statement,

(2) the false statement was material; and

Finding that GeoVera sufficiently proved these three elements with regard to Odom's answer to the policy application's bankruptcy question, the district court made a summary judgment in favor of GeoVera.

Odom's own testimony, confirmed by Ericka's EUO. testimony, shows that Odoms, when completing the insurance application in 2018, knew that Ericka's chapter 13 in bankruptcy case remained ongoing until the bankruptcy court granted her debts in December 2015. There was no real dispute about the material fact that Odoms incorrectly presented the existence of Ericka's

that he, provided his answer to the bankruptcy question was false, still did not intentionally deceive GeoVera about Ericka's bankruptcy status.

The intention to defraud must be determined on the basis of surrounding circumstances which indicate the insured's knowledge of the inaccuracy of the petitions in the application and his acknowledgment of the material of his misconduct. Such circumstances exist here. The same record that proves the falsity of Odom's erroneous presentation of Ericka's bankruptcy shows the insured's knowledge of the falsity because Odom's and Ericka's testimony shows that Odoms knew that Erica's bankruptcy continued until the end of 2015 and that his answer to the application's bankruptcy question was therefore false.

Furthermore, the record showed circumstances that create a reasonable assumption that Odoms acknowledged the materiality of its erroneous presentation. Before Odom's application for coverage of the Benedict House was completed, Odom submitted six separate policy applications to GeoVera for other properties. On each of them, Odom's made the same statement that neither he nor his husband had been involved in a bankruptcy for the past five years. The district court found that this fact showed that he intended to deceive GeoVera.

Odom's statement which sought to establish a real question of facts iconic with his previous testimony in which he admitted that his answer to the bankruptcy question was incorrect. He cannot create a real fact that is sufficient to survive a summary judgment by simply contradicting his own previously sworn testimony without explaining the contradiction or trying to resolve the difference. realized the materiality of his answer. Odoms, who seized a straw, claimed that GeoVera did not prove that it would have rejected the political application if it had been aware of Ericka's bankruptcy. In a sworn statement, however, Joseph Belton II, GeoVera's claimant, explained GeoVera's guarantees and that GeoVera would have rejected Odom's application if he had answered "yes" to the bankruptcy question. In the absence of evidence to the contrary, there is no real dispute that Odom's misrepresentation was substantially based on Belton's explanation.

GeoVera showed that Odoms deliberately tolerated Ericka's bankruptcy status and that his misrepresentation was significant.

by conducting a thorough investigation, including investigations under both insureds' oaths, established that the policy was acquired based on a misrepresentation of an essential fact – denial of the existence of a bankruptcy five years before the filing date. The fact that the fire – to a house without gas or electricity – was an obvious reason for an insurance company to be concerned about a potential burning for profit that resulted in the insurance EUO. Since GeoVera could prove material misstatements, there was no need to deal with the cause of the fire just one month after the policy was issued.

Insurers puzzle over how to make pandemics insurable again