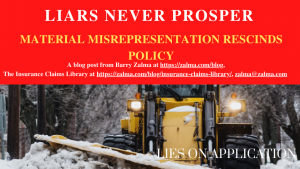 Never lie on an application for insurance

n March 21, 2018, Salient, by its owner Chris Fox, applied for general liability insurance from AmTrust North America, a subsidiary of Security. The “Underwriting Information” section of the insurance application (“Application”) described Salient’s business as “Basic Landscaping/Lawn Care Services, Maintenance and Gardening – Mowing, Mulching, Planting and/or Installation” and identified its work as “Landscaping Gardening.” .” Salient answered “No” when asked if it had performed, supervised or subcontracted snow removal work in the past 10 years.

The filing included a letter titled “Loss Guarantee,” which stipulated that Fox, among other things:

The application also contained a “WARNING” that “[a]A person who, with intent to defraud or knowing that he is facilitating a fraud against an insurer, files an application or submits a claim containing a false or misleading statement is guilty of insurance fraud.” Fox signed the application and acknowledged that he had read and understood all the questions asked in the application and had provided all the information required.

On March 22, 2018, Security issued Commercial Lines Policy (the “Policy”) to Salient for the period from March 22, 2018 to March 22, 2019. The policy required Security to cover and/or defend certain liabilities for bodily injury or property damage arising out of Salient’s business . The policy also stated, under the section “Commercial general disclaimer”:

1. The statements in the declarations are correct and complete;

2. These statements are based on representations made by you to us; and

3. We have issued this policy in reliance on your representations.

On or about February 7, 2022, Security was notified of Hutchinson’s lawsuit against Wellesley and Salient in Michigan state court stemming from a slip and fall incident on ice in November 2018. This was the first time Security had learned of Salient’s involvement in snow removal work.

The court was asked only to address whether the policy should be voided because of Salient’s misrepresentation in the application, an issue independent of the allegations in Hutchinson’s lawsuit.

This federal declaratory action would only determine the legal relationships between collateral and defendant, which will not impair or confound the state court’s analysis because:

Moreover, there was no evidence that the declaratory remedy was used only for purposes of “procedural fencing” or “to provide an arena for a race for justice,” and the court need not assume otherwise.

The court found that the declaratory action would not increase friction between federal and state courts and improperly intrude on state jurisdiction because there are different parties and no overlapping factual or legal issue. Finally, there has been no suggestion of a better or more effective alternative remedy.

If the moving party has met its burden of showing that the pleadings, depositions, answers to interrogatories, admissions, and confessions in the record are construed favorably to the nonmoving party, do not raise a genuine issue of material fact for trial, introduction of summary judgment is appropriate. A fact is “material” to summary judgment when proof of that fact would have the effect of establishing or disproving a substantial part of the claim or defense of either party.

Under Michigan law, where an insured makes a material misrepresentation in an application for insurance, the insurer has the right to rescind the policy and declare it void ab initio. A false representation in an application for insurance that materially affects the acceptance of the risk entitles the insurer to termination by law.

There was no dispute that Salient made a misrepresentation in the March 21, 2018 application when it denied performing, supervising or subcontracting snow removal work for the past 10 years.

Five months earlier, Fox, the signatory to the filing, signed the “SNOW CONTRACT 2017-2022,” which allowed Salient to perform snow removal and deicing services for Wellesley. The security has offered undisputed evidence that the policy as written would not have been issued but for a misrepresentation that no snow removal operation would have been performed. Also undisputed is the fact that Security “does not provide liability coverage to its insureds for snow removal operations and no premium has been charged for this liability exposure.” This showed the increased risk that Security wants to avoid from its insured’s snow removal operations. Accordingly, the USDC concluded that no genuine issue of material fact existed, and Security was entitled to rescind the policy based on the material misrepresentation by Salient in the March 22, 2018 application.

When the policy is cancelled, the parties must be restored to their respective positions prior to the contract. The security must return any premiums Salient has paid to restore it to pre-contract status quo. On the other hand, Security can restore reasonable defense costs to defend Salient in Hutchinson’s lawsuits before the court affirmed standing.

Since Salient had signed a contract to remove snow more than five months before signing the application for insurance, it knew that the answer to the application was patently and intentionally false. Even if the signatory of the application had forgotten the agreement, the innocent misrepresentation is still sufficient to support rescission because the insurer was deceived and had it known the truth it would not have issued the policy. Therefore, the court returned the parties to the position they were in before the insurance began.

Write to Mr. Zalma at zalma@zalma.com; http://www.zalma.com; http://zalma.com/blog; daily articles are published on https://zalma.substack.com. Go to the Zalma On Insurance podcast at https://anchor.fm/barry-zalma; Follow Zalma on Twitter at https://twitter.com/bzalma; Go to Barry Zalma videos on Rumble.com at https://rumble.com/c/c-262921; Go to Barry Zalma on YouTube- https://www.youtube.com/channel/UCysiZklEtxZsSF9DfC0Expg; Go to Insurance Claims Library – https://zalma.com/blog/insurance-claims-library.