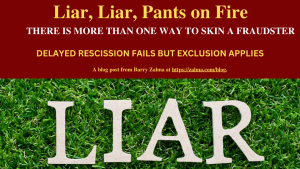 There is more than one way to skin a scammer

Watch the full video at and at

Evanston Insurance Company appealed from a bench trial on an insurance coverage dispute. After finding that Evanston failed to timely rescind the policy after learning that the insured lied on the application to avoid discovery of his embezzlement scheme and that an exception to the policy did not apply, the district court required Evanston to continue to defend Desert State Life Management against a class-action lawsuit stemming from its former CEO̵

Four things form the basis of the appeal:

Desert State Life Management was a trust company in New Mexico that acted as trustee for disabled individuals. From 2008 to March 2017, Donisthorpe was its CEO. In October 2016, Donisthorpe applied for an Evanston professional liability insurance policy on behalf of Desert State. Donisthorpe’s answer to the following application question was a lie: “Am the applicant [Desert State] or any principal, partner, owner, officer, director, employee, manager or executive member of the applicant or any person(s) or organization(s) proposed for this policy who are aware of any facts, circumstances, situations, incidents or allegations of negligence or wrongdoing, which may give rise to any claim that would fall under th[e] suggested insurance?”

Donisthorpe, through the application, warranted that he understood and accepted the notice and that the information in the application was true and that it “shall be the basis of the policy and be deemed incorporated therein.” Based on Donisthorpe’s application response, Evanston Desert State issued professional liability insurance.

Despite notices, cover-ups and exclusions, Donisthorpe completed Evanston’s application while running an embezzlement program that exposed Desert State to liability. Donisthorpe willfully embezzled and commingled over $4.9 million of Desert State’s client funds for his own use. Donisthorpe hid his plan by filing fraudulent reports with Desert State’s board of directors and with New Mexico regulators.

In November 2017, Donisthorpe pleaded guilty to a two-count federal criminal information charging him with wire fraud and money laundering. He was sentenced to 144 months in prison and ordered to pay $6.8 million in restitution and a $4.8 million judgment. Donisthorpe’s criminal case sparked demands for restitution among former clients in the desert state.

Evanston argued that the district court erred by denying standing and by concluding that the policy required Evanston to defend Moya and Bennett against the class action.

TERMINATION MUST BE IMMEDIATE

Termination is a fair legal remedy that leads to the termination of an agreement. It is available where there has been a misrepresentation of a material fact, the misrepresentation was made to be pleaded and has actually been pleaded. But a party wishing to revoke “must immediately exercise it or [the] the same will be waived.” [Putney v. Schmidt, 120 P. 720, 723 (N.M. 1911)]

The district court’s factual findings belie any suggestion that Evanston acted quickly in seeking to rescind the policy. Evanston learned of this admission in mid-December. Evanston was notified of its right to resign back in March 2017, when Bennett first passed on Donisthorpe’s misconduct to the insurance company. Circumstances beyond a party’s control may excuse a late termination. Here, by contrast, Evanston faced few (if any) obstacles to recall, particularly when it learned in December 2017 that Donisthorpe had pleaded guilty.

Because the undisputed facts establish that Evanston waited too long to rescind the policy, the Tenth Circuit held that the district court did not err in concluding that Putney effectively barred Evanston’s claim for rescission.

Termination was not the only remedy available to Evanston. In New Mexico, unambiguous contract provisions are applied, not interpreted. Although New Mexico courts generally interpret exclusionary language narrowly, they do not apply this principle to override the clear and unambiguous terms of an exclusion.

Because the unambiguous plain language controls, the Tenth Circuit applied Exclusion P as written. The negligence claims in the class action arose out of Donisthorpe’s mix-up. In other words, the claims “arise from, and therefore all claims arise from, Donisthorpe’s misconduct.

Evanston did not have a duty to defend Moya and Bennett under the policy. On reversal, the Tenth Circuit affirmed the district court. But it reversed the trial court’s order of exclusion P and remanded the case with instructions to enter judgment for Evanston and against Moya and Bennett. A concurring opinion argued that Evanston was sufficiently prompt in rescinding the policy but that fact was irrelevant because of the application of the exception. Therefore, Evanston owed nothing, was entitled to keep the premium it sought to recover, and owed nothing to the defendants.

Although termination was an obvious remedy—the policy was obtained through a lie told by a criminal attempting to conceal his crime—Evanston deprived himself of the right to terminate by delay. Regardless, the exclusion was clear and unequivocal and, as a result, owed neither defense nor indemnification to the insured and its trustee. Liars never succeed and insurance companies that sit on their rights will lose them. In this case, if the policy was cancelled, Evanston was required to repay the premium, but since the claim was excluded, it was entitled to retain the premium and seek reimbursement of defense costs incurred, although this would be difficult, as the insured had almost no assets.