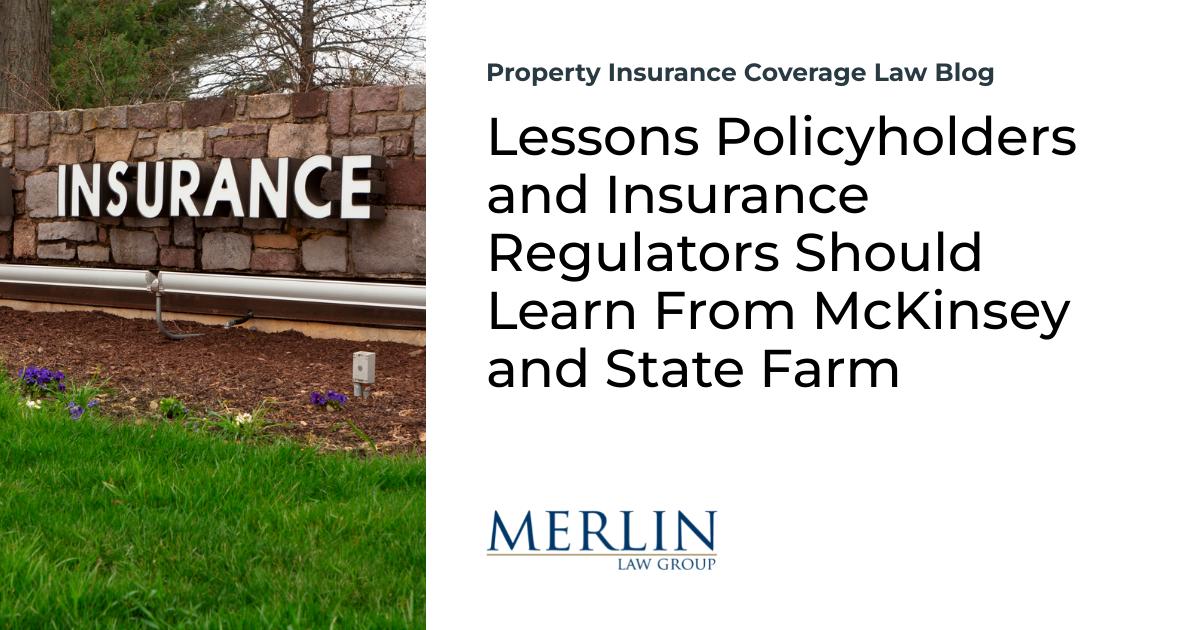 A colleague suggested I read When McKinsey comes to town — the hidden influence of the world’s most powerful consulting firm. Chapter 10 was about McKinsey’s work with the Allstate Insurance Company. McKinsey publishes Insights into insurance which is worth reading. Long after completely transforming Allstate Insurance Company’s claims processes, McKinsey continues to work intimately with many insurance companies, including State Farm.

A dispute over the discovery in Oklahoma in 20161 showed that this is very big business and that McKinsey has helped State Farm shape claims processes:

7;m sure we got our money’s worth out of them,” but could not testify and was not prepared to testify about the details of the return State Farm received on their investment.

These are not small consulting fees. Claims processes and culture can significantly affect an insurance company’s bottom line.

What were some of the claims processes and how was McKinsey involved:

7….Ms. Eilbacher was only prepared to testify about his limited involvement in the ‘Content Material Spend Review Project’ (‘CMSR’) from 2006 to 2008.

8. The CMSR project involved analysis of five (5) workflows that State Farm had identified as areas where State Farm spent a lot of money on claims. The five (5) work streams were: (a) content, (b) water reduction, (c) roof, (d) electronics, and (e) Premier Service Program (“PSP”).

16. Eilbacher admitted that cost leadership should have done a cost-benefit analysis or a return on investment before starting the CMSR project. However, Eilbacher was unable to testify and was not prepared to testify about financial goals or any benefit analysis of the CMSR project, did nothing to ask for or obtain this information, and did not bother to speak with anyone from Cost Leadership in preparation for her deposition.

18. Eilbacher was unable to testify and was not prepared to testify about any of the criteria or specific results of the five (5) workflows, as follows:

(d) Roofing was identified by State Farm as the largest expense. Yet Eilbacher could not testify whether or not McKinsey was involved in the cap work and had no knowledge of the criteria for the cap spending, any of the details of this work stream, and had no idea how State Farm determined it was the largest spending area.

(e) Eilbacher admitted that closed file reviews occurred and were part of the CMSR project. She admits that there would be supporting documents (such as a questionnaire) or some kind of data available from this review… Eilbacher did not know which work streams had closed file reviews, did not remember who was involved in putting together the questionnaires, and could not remember the results of these reviews. She admits that there are documents from these [sic] part of the CMSR project.

Why aren’t regulators asking for these internal claims process documents as part of insurers’ market research? Yesterday’s blog post, Why Are Property Insurance Claims Underpaid and Independent Disaster Adjusters Leaving the Field?, showed an internal claims process directive designed to hide the truth about the reasons for denying a cap claim that would not appear in a closed claim because adjusters were instructed to make their claim notes vague to protect the erroneous denial decision. If read carefully, the document shows how insurers use “re-inspectors” to criticize notes on claims that may show the wrongful claims behavior.

Insurance adjusters often say that a claim stands on its own. This should be true when all claims processes are fully disclosed and transparent to the property policyholder. The point of yesterday’s and today’s blog posts is that State Farm and other insurance companies often fight this openness and honest explanation of the claims process. These processes lead to the methods of achieving overall goals and incentives being used by those responsible for property insurance claims.

Lack of transparency leads to mistrust and a deep sense of insecurity.